The Province of Nephalia

Those Innistrad denizens interested in commerce are attracted to Nephalia. Caravans of merchants ply the busy trade routes between Nephalia's cities, and unscrupulous alchemists and necromancers traffic in nefarious items via Nephalia's underground corpse market. Many of Nephalia's port towns are subject to the ever-present Nebelgast, the salt-soaked fog that rolls in and out with the tide, bringing with it a host of geists from unnamed shipwrecks. 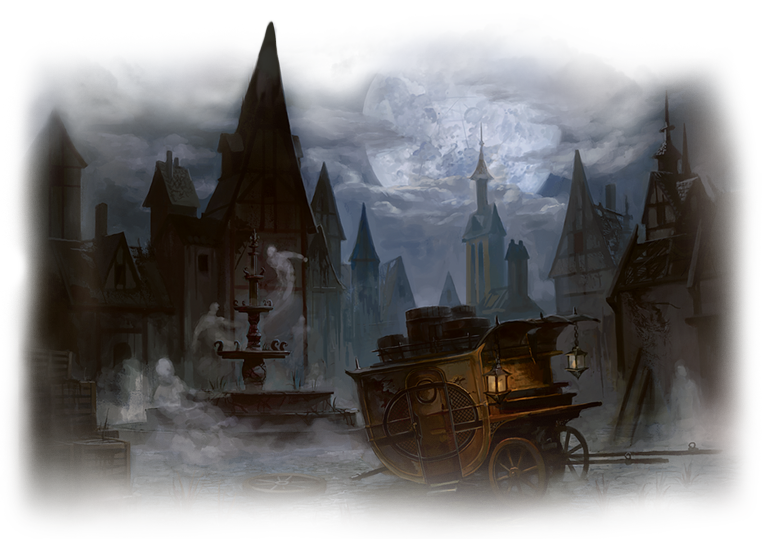 In Nephalia, skaab-stitchers and ghoulcallers alike can find out-of-the-way places in which to practice their art with little interference from suspicious townsfolk or Avacynian authority. Both must remain highly secretive, as their trade is still feared within the general human populace. The Stromkirk vampires and Nephalia's merchants see money to be made, however, so their arcane trinkets and dark services are tolerated as long as they remain only rumor.

Aristocratic, richly cultured, and cruelly hedonistic, vampires comprise Innistrad's only nonhuman civilization. The four major vampire bloodlines, like noble families, control manor houses, courts, and castles. Distributed across the plane, but concentrated in the province of Stensia, vampires hunt humans for the sustenance they require and the thrill they crave: the blood of the living.

Vampires have few vulnerabilities, but stakes made from living wood, the reflection of the moon on running streams, and water blessed by the angel Avacyn can all cause particular harm to them. Vampires possess a variety of powers, from flight, to hypnotic glamer magic, to transformation, although their particular abilities vary widely.

Innistrad is a world tormented by the undead. The necromantically animated corpses of the dead, called "ghouls" or "the unhallowed," shuffle mindlessly in massive hordes, seeking to devour the flesh of the living. The twisted necromancers who raise them are called ghoulcallers, and they crave the power and destruction brought by their shambling minions.

Some alchemists of questionable sanity create undead in another way, by suturing together the mongrel flesh of several cadavers and breathing into them a semblance of alchemical life. These stitched abominations, called skaabs, often inspire mobs of torch-bearing villagers to purge their towns of the unnatural beings—and their creators.

The incorporeal spirits of the dead, called geists, take many forms. They can be harmless, even protective spirits who haunt the living out of a sense of duty, fealty, responsibility, or love. Or they can be specters of revenge and cruelty, appeased only by mortal offerings.