The province of Kessig consists of rolling farmlands surrounded by grasping fingers of dense, dark woods. The woods hide werewolves, geists, and other monstrous threats, while the farmlands support a hardscrabble rural livelihood for Kessig's humans.

Kessigers are self-reliant, pragmatic, and plainspoken. They rely on their no-nonsense faith in Avacyn and in their rustic folk magic, and don't trust the officials of Thraben or the merchants of Nephalia. Because of its isolation, though, Kessig may the province most threatened by fiendish forces. Now that the influence of Avacyn's wards is waning, nothing stops the roving howlpacks of werewolves and the luminous, screeching geists from invading the rural villages. Kessigers now contemplate the perilous, fiend-afflicted roads out of the province, weighing the dangers of travel as every full moon approaches. 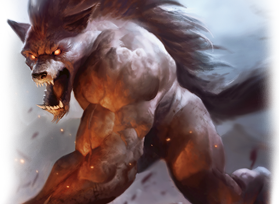 The werewolf is a creature of duality, forever dragged between two worlds: it is both monster and human, nature and civilization, rational thought and raw savagery. A person afflicted with lycanthropy is forever in doubt of his or her own urges and instincts. Even in human form, a werewolf feels the pull of the wolf's essence gnawing within. As the moon grows full, the safeguards provided by conscience, religion, and personal restraint cannot stop the werewolf's wild nature from emerging.

Werewolves in their bestial form are beings of unparalleled savagery and strength, perfectly engineered for slaughter. Their minds are explosions of instinct and bloodlust, attuned to the kill. Packs of werewolves roam the wild places of Innistrad, hunting travelers and terrorizing rural parishes.