Year of the Rat

back during Black Week, I made the following statement: “There's no such thing as a rare Rat.” (Yeah, yeah, Mistform Ultimus. You know what I meant.) Apparently, the Champions of Kamigawa designers like making me look like a fool. Oh, they've been out to get me for months now. Why else would they say “Hi” to me nearly every day? It's all a plot. Why else would Brian Tinsman sneak into my house at night and rearrange the coins in my piggy bank? I know it's him. Why else would Bill Rose make absolutely no comments about the tinfoil hat I wear at night to keep him from stealing my thoughts? Because he's figured out a way to circumvent it. Why else would Champions include this card? 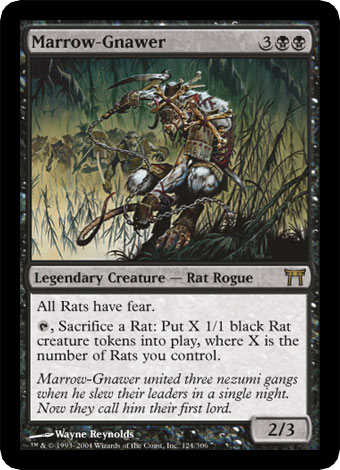 Luckily, many other comments from my Black Week article such as “I really can't say that they do,” “Many of them force discards” and “Duh” are all still true.

Well, well, well. Lookee here—it's a Rat lord! Finally, a leader for all 13 Rats (plus Lab Rats) (yeah, yeah, plus Mistform Ultimus) in the history of Magic. Seems a little odd, huh? Perhaps… just perhaps… Rats are a major black race in the Kamigawa block. Maybe there are five more of them in Champions alone. It doesn't make much sense to preview a lord without also getting a look at the creatures it interacts with, right? This is a deck column, so I need those other Rats to put Marrow-Gnawer in context and show what he can do. So it's your lucky day—a 6-for-1 preview! Let's start with Nezumi DJOGnba&sdlmnZ==aefn zd get off me djngf[LEJN Scott sldfkgn/E OW 809hbmn , cvasodih –0e 89ts#kd AOB sjd%ng9ouw owowowowowow nm(jsn uiweEFnf0uih my ear dsJNu+ohb9873 dn dub&gt;nQA9Udrkj OK, slight change of plans. Let's just preview Marrow-Gnawer today.

Time to break down Marrow-Gnawer's abilities. Fear is pretty straightforward: It gives your Rats evasion. Technically, it gives all Rats evasion, but I think it's a pretty good bet that you'll have at least one black creature on the table. Come to think of it, maybe you won't… but I'll get to that.

The second ability increases (probably) the number of Rats you have in play. If you start with N Rats before you use the ability, you'll wind up with 2(N-1) Rats after you use it. That means 2 Rats become 2 Rats, 3 become 4, 4 become 6, 5 become 8, 6 become 10, and so on. Obviously, the more Rats you start with, the better pure bonus you'll get. It stacks up as well: Start with 4 Rats and you'll have 10 after two breeding cycles. You can use Marrow-Gnawer's ability on itself. Using it on a Rat that's slated to die from a spell or combat damage turns a negative into a positive. Watch out for disruption from your opponent, though—the ability figures out how many Rats you're going to get on resolution, so zapping some Rats in response to your activation of the ability will throw off your numbers.

I'm going to start off with a pretty vanilla deck. By the time you can get your claws into some Marrow-Gnawers, you'll have plenty of other Champions cards to go along with them and these decks will be obsolete. But this is a deck column, so in the meantime y'all get some decks. Stay with me on this crazy logic train: What if we paired Marrow-Gnawer… with some Rats? Goofy, I know. Specifically, let's have Rats that like to see large numbers of Rats (Swarm of Rats and Pestilence Rats). And Rats that like to die (Disease Carriers). And Rats that are good when they come into play but are expendable afterwards (Ravenous Rats and Chittering Rats). And cards that make multiple Rats (Lab Rats). Throw in some support cards, and we've got a deck.

So, I get to preview a legendary creature today. For the record, I am hugely in favor of making legendary creatures and legendary everything elses—lands, artifacts, etc.—work the same way. I argued for alignment a couple of years ago, though my plan was to make “Legend” a subtype for every permanent type. Switching to a universal supertype instead is probably better. Sure, a couple of tricks have vanished from our sleeves, but I'll pay that price for overarching consistency.

So, like I said, I get to preview a legendary creature today. As we've learned from Rei's feature article and the fiction archive on the Champions of Kamigawa minisite, every legendary creature is a character, and every character has a story. Marrow-Gnawer is no different. Born into a maze in Sensei Hisoka's lab, he spent his first twelve years of life searching for cheese. Freed by Mrs. Frisby, he vanished through a portal and wound up in a strange and dangerous plane called New York City. As a rat-man, he was forced to live in the sewers, but his life was enriched by a quartet of orphaned mutant turtles. Acting as their father figure, he trained them in the martial arts he had learned in his home plane of Kamigawa. Or not. The real story of Marrow-Gnawer is interesting, vicious, and ties in to his card's abilities in an obscenely flavorful way. And you're just going to have to wait to find out what it is until you can get your hands on a Champions of Kamigawa Player's Guide (found in a Fat Pack near you) or someone else spoils it on the website. So nyah. 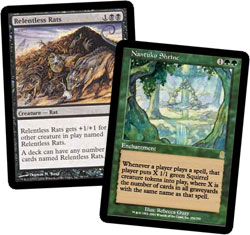 Over the past couple of weeks, I've received via electronic Pony Express (or “the E-mail,” as you kids call it) a pair of decks that take very weird advantage of Relentless Rats. These decks don't simply throw Relentless Rats on the table and beat down—they exploit its “any number of copies” exception to use the card as a combo engine. I'm going to shamelessly corrupt these decks by adding Marrow-Gnawer to them. (Hey—it's what Marrow-Gnawer would have wanted me to do.) No, no, really, the legendary Rat Rogue is synergistic. 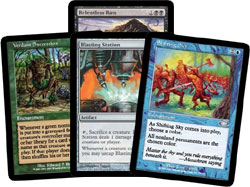 That's a great plan, and Marrow-Gnawer wants to help. Instead of using Alter Reality, I'm going to use Shifting Sky to make all nonland permanents green. The Verdant Succession combo still works, and (as a plan B) Marrow-Gnawer's fear ability is enhanced. Since there are no black creatures anymore, Rats are unblockable except by artifact creatures. And who plays those? Marrow-Gnawer + green Relentless Rats + Verdant Succession is good; Marrow-Gnawer + some Rats + Blasting Station is good. (When X Rat tokens come into play, Blasting Station's untap trigger triggers X times.)

Until Marrow-Gnawer is available, give Pippo Pappo's and Chris's decks a try without them (that's how they were originally designed, after all). Until next week, have fun with Rats.