the columnist for tournament Spike column Swimming With Sharks I have had the opportunity to preview some pretty incredible cards over the past few years. Most recently I got to do the honors on Countryside Crusher (already a chase rare and contributor to both Loam-based and regular old G/R Tarmogoyf decks); the set before that, I had a chance to preview both the insanely playable Shriekmaw and the universally beloved (or hated!) Cryptic Command. Previous to those, I was assigned the flexible Pact of Negation, personal favorite Serra Avenger, and sometime "best card in the format" Spell Snare (depending on the format, time of day, who you asked, when you asked them, and so on… but always quite good and usually better than Counterspell itself). And then there were best-card-ever Lightning Helix (of "the $16,000 Lightning Helix" fame); Hand of Cruelty (can't Lightning Helix that); Ink-Eyes, Servant of Oni (half Ninja, half Spiritmonger); and Heartbeat of Spring (of Heartbeat of Spring fame). So basically, I have been really lucky on preview cards, over and over, year-in, year-out, set after set after set...

And yet, never, before today, has my editor ever felt the need to amend his plaintext email describing a new preview card with the words...

And when you see this card, really, there is nothing else you can think to say (after you are finished double-taking, looking more closely, and scratching your temple) but "yes, really." 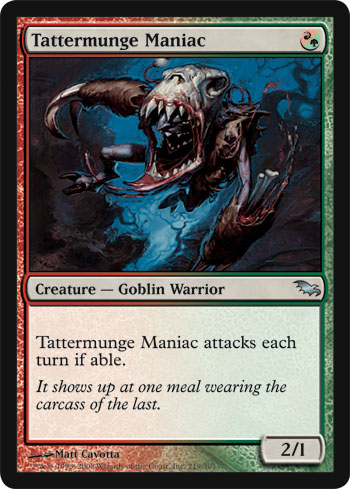 So just when it looks like R&D has removed the fastest one drops – Kird Ape and Savannah Lions – from Standard rotation, they go and print another two power creature for a single mana. More than that, this particular 2/1 for one has perhaps one-half the color discipline of Tarmogoyf (which is not very much at all)! What will, what can, hold back the turn one iron horse, that locomotive of lacerations, this up-and-coming engine of excitation, Tattermunge Maniac? At least they gave him a drawback, such that it is.

Why does a creature like Tattermunge Maniac need a drawback at all?

Numerous analysts "in the know" from the ancient "O" at CMU to the obscure and smoke-filled secret halls in Renton, WA, have maintained for years that Jackal Pup was superior to Savannah Lions... just because it was red, even with the drawback.

As Tattermunge Maniac is even easier to play (even in a red deck), there has to be some kind of tradeoff given the creature's speed and power [-to-mana cost ratio].

Even without the speed and power of the modern dual land, Tattermunge Maniac has essentially no color discipline. In Standard last year, testing Gruul, we had to play a certain number of Forests in order to hit our second turn Scab-Clan Mauler and Tarmogoyf, but it seemed losing with Gruul often went hand-in-hand with drawing too much green and not enough red. Tattermunge Maniac allows the red-hungry Gruul deck to reduce the number of Forests required for first turn action... and that's in Standard. Put another way, you can play him on a Pendelhaven!

One of the stories I like to tell is "that time Jon Finkel made a mistake." It is a pretty glossed over story because it took place in a dominating matchup where Jon ended up crushing anyway and winning the US National Championship within a couple of hours. What happened was that there were two Wild Dogs in play and Jon chose to Vicious Hunger the one with Rancor on it rather than the one without Rancor on it; the problem was that there was a Meekstone in play and the Rancor was essentially already locked down and he just returned it to his opponent's hand to club him for another two via the fast and loose remaining Wild Dogs. Ka-pow! Jon won easily anyway.

So... Wild Dogs. No one ever gamed with Wild Dogs for the Cycling 2. Yes, the ability to get rid of it via cycling when the opponent has more life is nice, but the bet you make with Wild Dogs is that when you play a 2/1 creature for a single

... The opponent doesn't usually have more life than you do and you clock the hell out of him starting with turn two, hopefully having garbed up your Dogs with the in-Block Rancor or some other impressive accoutrement.

No, Tattermunge Maniac doesn't have a fall back plan, but what is the difference in drawbacks? Wild Dogs's drawback is pretty steep. A surprise block and a nicely placed Shock and you might just lose a Dogs covered in all kinds of awesome to the fiery hands across the table.

Tattermunge Maniac... has to attack every turn. Which is exactly what you intend to do with a 2/1 creature for one mana. What's the point of that drawback anyway? You were going to attack! Sure, there are awkward board positions. Sometimes you will end up throwing away your card for free. But Tattermunge Maniac is going to have two things going for it as long as it is legal in any relevant format: 1) People don't really block that much in Constructed, and 2)...

Being in red is a huge bonus for this kind of a creature. Why? Red has better capability to seize and cultivate tempo in the early game than any other color. You can lay Tattermunge Maniac out on the first turn, then just Tarfire, Incinerate, Rift Bolt -- whatever -- every creature the opponent plays, every turn, while clocking for two at a time until a friendly body joins the fray for four or seven or whatever, at which point the game ends in a blaze of direct damage (that's the plan, anyway). Sure, you technically have to attack every turn... But that is exactly what Tattermunge Maniac was built to do! With the red side of this "Gruul" creature, you are perfectly set up to clear a path so that the attacks are profitable, over and over, and brutally efficient more often than not.

Let's talk drawbacks. Tattermunge Manic has to attack every turn, which means that after the first turn it is played, the newest member of the efficient beatdown family will not be eligible for blocking; sometimes having to attack is just going to be a waste of card economy. How does this stack up to Jackal Pup's drawback? It's not quite as bad in my estimation. The two cards match up similarly with a superior ground force. Neither one wants to rumble there. Tattermunge has to attack, and will likely meet a quick end. Jackal Pup doesn't want to attack, probably won't unless there is a good reason (and that same good reason would likely apply if the Maniac had taken the Pup's place), but if Jackal Pup doesn't attack... It's probably pretty worthless on defense. Trading using a Jackal Pup is usually a sign of a poor hand, and most of the non-trades a Jackal Pup is typically utilized for tend to be against creatures like Ophidian (which brings up a completely different set of headaches), and blocking there is really just an exploration of options, not a reason to raise the victory banners most of the time.

Once again, whatever is in the plus for Tattermunge Maniac goes double given his family tree. In wide formats that include Onslaught Block, Tattermunge will be the Maniac who starts after the opponent, softening him up for the Goblin Piledriver, Goblin Warchief, and Goblin Ringleader who are going to appear over the course of the next couple of turns. In smaller formats like Standard, Tattermunge Maniac can come back turn after turn thanks to Wort, Boggart Auntie if his relentless attacks prove fatal... and if not? He will be a member of a powerful and synergistic squad. From either side of the format size spectrum, Tatturmunge Maniac can hook up with great burn cards and Tarmogoyf, or make a little extra of himself when trading on offense (or creating a difficult defensive situation) alongside Greater Gargadon; the Maniac's status as a Goblin is intended to be a bonus, and however appropriate he might be with other Goblins, that status should not be considered an inflexible linear tether, as it is with earlier Goblin one drop All-Stars like Goblin Lackey or Skirk Prospector.

Just as Tattermunge Maniac is a Goblin from the red side, it is a Warrior from the green. This is a creature that could be at home with an Obsidian Battle-Axe in hand, setting the opponent up starting turn two for a game ending Profane Command rather than a flurry of red cards. 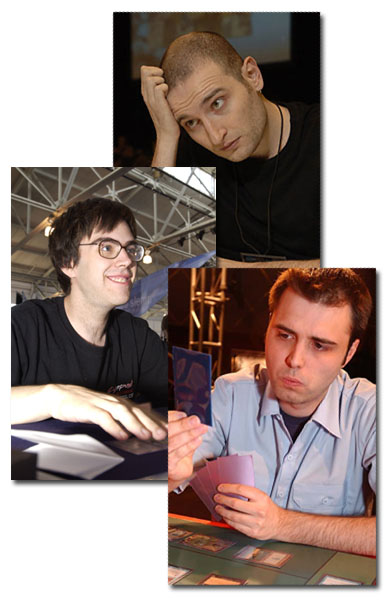 You may not have noticed it but the kings of old school are quietly taking (back) over from their perch in the Greatest City in the World. Following his Hall of Fame induction, Zvi Mowshowitz put up a nice finish at the World Championships. Fellow Hall of Fame player Jon Finkel is a Pro Tour Champion again. Onetime US Open winner Jamie Parke just snuck into the Top 16 of Grand Prix Philadelphia, qualifying for Pro Tour Hollywood... and you might even be able to make an argument for the surprise Grand Prix finals appearance by Meddling Mage Chris Pikula at the last GP Philadelphia… For his part, Chris actually put a fair bit of testing and preparation into this year's Extended PTQ season; many of them own their own Tarmogoyf.

But what about the guy who was, at his height, considered perhaps the most popular Pro Tour player in the world?

Might this new Jackal Pup-like creature be an invitation to return for Pikula's old running mate, the King of Beatdown Dave Price? I remember a few years ago, Randy Buehler, before he was in charge of the digital side of Wizards, before he was in charge of Magic development, whispered that he snuck Goblin Warrior Goblin Raider into the then-new base set "so Dave would have a two-drop to work with" following the success of his Mono-Red Rage Weaver / Firebrand Ranger deck in the summer of 2001 (when everyone else was playing with Blastoderm, Saproling Burst, and Opposition). Well, with Tattermunge Maniac, Dave (should he choose to make a triumphant return) doesn't get quite a two drop… but instead a superb one drop in the tradition of the creatures that helped him to achieve his 1998 Pro Tour victory on the Boat.

Firestarter: What do you think? Will Tattermunge Maniac help to light a fire of success for young mages everywhere?