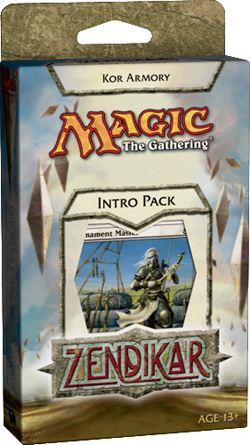 he "Kor Armory" deck puts you in command of the Kor, a resourceful race of adventuring nomads who use Equipment to survive as they wander their dangerous world. Their ingenuity will be your opponents' downfall.

Almost all of your creatures are Kor. Play them out quickly to overwhelm your opponent's defenses. Many of them have kicker abilities that give you a bonus if you pay extra mana when you cast them. For example, Kor Aeronaut can give another creature flying for the turn if you pay

You can make your creatures more powerful by giving them Equipment. Once an Equipment card is on the battlefield, you can pay its equip cost to attach it to any creature you control. Some of your creatures have abilities that turn on only when the creature is equipped. Kor Duelist gains double strike, for example, which means that it deals damage twice each combat, and Armament Master makes your other Kor creatures larger. Conqueror's Pledge makes six 1/1 Kor Soldier creature tokens, which are great both for carrying Equipment and for giving Armament Master an army to lead. With its kicker ability, you can pay eleven total mana to make twelve tokens instead!

Many other cards from the Zendikar set can improve the "Kor Armory" deck. Kor Outfitter attaches an Equipment to any of your creatures for free when it enters the battlefield. There are also many other Equipment cards that can help the deck. Adventuring Gear gives a creature +2/+2 whenever a land you control enters the battlefield. A creature equipped with Blazing Torch can throw it to deal 2 damage to a creature or player. And Grappling Hook gives a creature double strike and the ability to force an opponent's creature to block it.

With the Kor and their Equipment on your side, you'll conquer any obstacle your opponents place in your path! 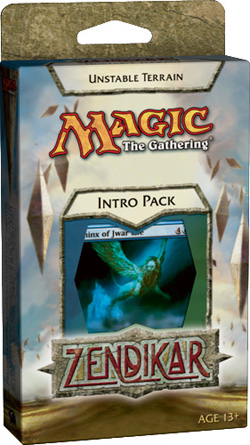 he "Unstable Terrain" deck lets you harness the primal energy of the indigenous wildlife of Zendikar. This dangerous plane's powerful beasts will run roughshod over your enemies.

Many of your creatures have abilities that trigger whenever a land enters the battlefield under your control. Windrider Eel, Territorial Baloth, and Baloth Woodcrasher each get bigger until end of turn; the first two get +2/+2, and Baloth Woodcrasher gets +4/+4 and gains trample too. Grazing Gladehart lets you gain 2 life. Turntimber Basilisk can force enemy creatures to block it so that its deathtouch ability can kill them. Roil Elemental is the most dangerous of them all: it lets you gain control of your opponent's creatures as long as it stays on the battlefield.

Your landfall creatures work best when you have lands to play, and your other cards help you find more lands to feed them. Merfolk Wayfinder and Frontier Guide both have abilities that find you more lands, and the instant Harrow lets you trigger your creature's landfall abilities when your opponents least expect it. You may also need to deal with some of your opponent's creatures. Paralyzing Grasp keeps an opponent's creature from untapping, and Mind Control steals a creature and lets you use it against your opponent.

Many other cards from the Zendikar set can help the "Unstable Terrain" deck. Khalni Heart Expedition is an enchantment that finds you more lands to power up your landfall creatures. Oracle of Mul Daya lets you play with the top card of your library revealed, and you can play that card if it's a land; on top of that, it lets you play an extra land every turn. Finally, Rampaging Baloths is a 6/6 creature that makes you a 4/4 Beast creature token whenever a land you control enters the battlefield!

With the feral might of Zendikar at your fingertips, you'll easily trample any opposition. 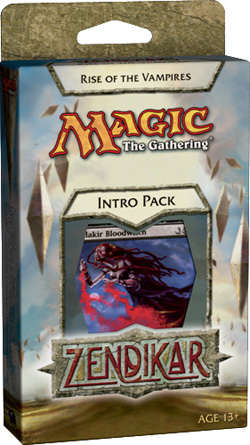 he "Rise of the Vampires" deck puts you in command of a relentless army of undead that's ready to drain the life out of your enemies.

Vampires are the bulk of your fighting force. Small creatures like Guul Draz Vampire and Child of Night come out quickly. Use them to get your opponent down to 10 or less life, when Guul Draz Vampire becomes larger and much harder to block. Acolyte of Xathrid isn't a Vampire, but it fits right in with them when its ability activates to make your opponent lose 1 life. If your Vampires aren't big enough to do the job, try sending in Zombie Goliath or a pumped Vampire Aristocrat.

Your opponent will probably have creatures too. Command your Vampires to eat them with Feast of Blood, or use Hideous End to kill them while also hurting your opponent. In addition, your flying Vampires like Vampire Nighthawk can attack over enemy ground creatures. Malakir Bloodwitch both has flying and drains 1 life from your opponent for each Vampire you control when it enters the battlefield.

The Zendikar set contains many other Vampires that can improve the "Rise of the Vampires deck." Blood Seeker makes your opponent lose 1 life every time he or she casts a creature spell. Bloodghast has haste if your opponent has 10 or less life and it returns to the battlefield from the graveyard every time you play a land. Also, Vampire Nocturnus from the Magic 2010 core set gives all your Vampires +2/+1 and flying as long as the top card of your deck is black! 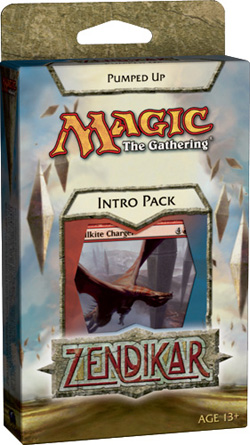 he "Pumped Up" deck lets you command the elemental power of fire and lightning. You'll leave a trail of ashes behind as you burn opposing players and their forces to a crisp.

Use your direct damage spells to decimate your opponent's army. Burst Lightning is great for taking down small creatures, while Spire Barrage and Fireball can deal with larger ones. Your creatures can get into the destructive act too. Torch Slinger deals 2 damage to a creature when it enters the battlefield if you paid its kicker cost, and Prodigal Pyromancer deals 1 damage to a creature or player of your choice every turn.

After you turn your opponent's creatures into piles of ash, your own will be free to pound your opponent into submission. Molten Ravager's ability to get +1/+0 until end of turn for

means that its power is limited only by the number of Mountains you control, so it's perfect to send at a defenseless opponent. You can also send damage directly at your opponent with spells like Fireball. Of course, any red mages worth their salt have a Dragon up their sleeve. Yours is Hellkite Charger, which can attack twice in one turn and inspire your other creatures to do the same.

Many other cards from the Zendikar set can give the "Pumped Up" deck more destructive power. Zektar Shrine Expedition gives you a 7/1 creature with haste and trample when you complete its quest, and Hellfire Mongrel deals 2 damage every turn to an opponent who has very few cards in hand. Many red cards are good at burning creatures, but Obsidian Fireheart can set even your opponent's lands ablaze. Its ability puts blaze counters on lands, and each land with a blaze counter deals 1 damage to its controller each turn!

With fire and lightning leaping from your fingertips, you'll leave destruction in your wake and your enemies in flames. 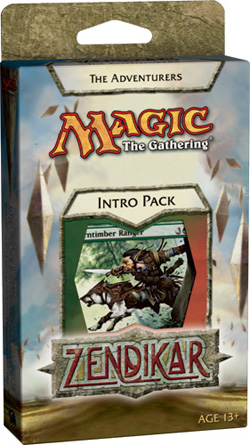 he Adventurers" deck puts you in control of an intrepid party of adventurers who have banded together to explore their hostile and dangerous world. With them at your side, you'll overcome any obstacles your opponents can put in your path.

The most important cards in this deck have the creature type Ally. Many Ally creatures have abilities that trigger whenever any Ally (including itself ) enters the battlefield. Some, like Oran-Rief Survivalist, gain +1/+1 counters. Others, like Joraga Bard, give some bonus to all of your Allies that lasts until the turn ends. A few, like Murasa Pyromancer, deal damage to your opponent's creatures. Kazuul Warlord is the leader of the Allies—it gives +1/+1 counters to all Allies you control whenever it or another Ally enters the battlefield.

Often your Allies will work together to win the game. Other times you'll need to help them with your spells. Use Lightning Bolt and Fireball to clear your opponents' creatures out of the way, and Beast Hunt to find more Allies to overwhelm your opponent. If that doesn't work, use Act of Treason to take your opponent's best creature for a turn, or Overrun to make your creatures enormous for a turn. Because Overrun gives them trample, you'll be able to deal damage to your opponent even if he or she blocks your creatures!

The Zendikar set contains many cards that can help "The Adventurers" deck. The deck's Allies all need each other to truly shine, so the easiest way to improve the deck is to put in more Allies. You could also give your adventuring Allies some quests to go on. Zektar Shrine Expedition gives you a 7/1 creature with haste and trample, Quest for the Gemblades makes one of your creatures larger, and Beastmaster Ascension gives every creature you control +5/+5!

With veteran explorers like these watching your back, your quest for victory can't help but meet with success.