ynergy is the crux of most successful creature-based Magic decks. Whether it's the synergy between Llanowar Elves and Elvish Archdruid or Stoneforge Mystic and Batterskull, the additional value eked out by positive interactions goes a long way over the course of a deck's life cycle.

Sure, there are cards like Bloodbraid Elf, Lingering Souls, and Cryptic Command that scream at you with more raw power than a monster truck on Super Sunday. But most often, these cards supplement more synergistic strategies. Even Lingering Souls can pair up (though not in the soulbond sense) with Drogskol Captain.

The most intense version of synergy is when you have a card that opens so many doorways to possibilities you can build an entire deck around it. Not necessarily a deck that crumbles if you're lacking the key card, but a deck that is significantly enabled once your key card is online.

So, how about we look at a card like that today?

If you're looking for the results of last week's Standard challenge, that will take place next week. Instead, I'm going to spoil a brand new card from Duels of the Planeswalkers 2013—and consequently from Magic 2013—and talk about that.

I sure hope you're okay with this. If you really wanted to see the Standard decklist results, I could hold off my preview card until next week...

Are you sure? Alright, then—a preview it is!

In Avacyn Restored, we printed Wolfir Avenger, a 3/3 flash regenerator for three. That guy Wolf was incredible in Limited and has seen some Constructed play.

I wonder what happens, then, when you make it a 4/4 for four and trade off regeneration for something much more unique?

If you enjoy a good old-fashioned ambush, Yeva is right up your alley. (Well, hopefully not literally.) With Yeva around, attacking into a green mage becomes rather tricky. "Does he have Yeva?" is a thought that must run through your mind every time you could attack. And then once Yeva is in play, it becomes even more complicated. Any creature turns into an ambush! 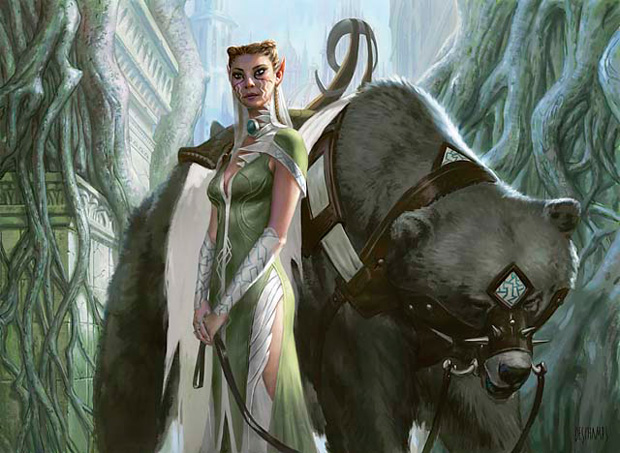 But I'm getting ahead of myself—I apologize for letting my brain drool all over the place like that. There are three steps to building around a single card. I'm going to go through each, highlighting every detail.

Step one is to analyze each piece of the card, so let's do that for Yeva.

Okay, so her mana cost is

. At four mana, Yeva is going to have to compete with Garruk Relentless; Thrun, the Last Troll; and Huntmaster of the Fells—that's some steep competition. Her closest analogue is Thrun—but we'll get into more of that later.

also means she's harder to play in a three-color deck, although her ability pulls you away from that anyway. With all of green's acceleration she can certainly sit alongside other green four-drops in the same deck, but most likely you are going to build your deck to push her above the others.

Ooh, this will go perfectly in my herald deck! I've been waiting for this for years!

The big note here is that Yeva is legendary! Yes, that's right: the core set is doing legends for the first time since Tenth Edition! There are five pretty sweet ones from across the Multiverse—one in each color—and you won't want to miss them.

In any case, legendary status generally pushes me away from wanting to put four of these into my deck. I still might play four, though, if Yeva turns out to be a strong enough build-around-me. If my deck absolutely needs the card to work, I will play four. If it doesn't, then two or three should be sufficient.

Also, note that relevant creature type! There's something to potentially be done there as well, and the kind of edge that would push her over similarly costed creatures.

Yeva is a 4/4 (although in Duels she will actually be a 4/5 until the first patch) which are stats that are neither puny nor out-of-this-world. The 4-power green creature that probably sees the most play in Standard (excluding transformed Werewolves and Wolfir Silverheart) is Thrun, the Last Troll, and he has proved plenty playable.

Now here is where we start comparing abilities. Let's keep up with the Thrun comparison, since Yeva is close in many regards: they both cost

If you're looking for something that doesn't die to Doom Blade, then Thrun is your troll. However, a resolved Yeva might be even more of a control player's nightmare than Thrun! Having to deal with any creature at instant speed means the control deck has no idea what's going on until his or her end step. Normally, it's the control deck playing around in the end step—but not so much with Yeva around! Lethal power can appear out of nowhere.

Of course, Yeva herself is also a problem in the opponent's end step. If a 4/4 appears while the control deck thought the coast was clear, the control player might be in a tough spot as 4 bonus damage comes cruising on in. Sure, Yeva can be countered—but that might just open the door up to you finally resolving a gigantic monster on your turn.

So, Yeva is comparable to Thrun—arguably favorably so—against control. But how about against beatdown? Thrun against beatdown is decidedly mediocre—but Yeva is a gigantic headache.

Let me ask you a question. You control a pair of 2/2s. If you look over to the other side of the table, and your opponent has a tapped Yeva and five untapped lands with two cards in hand, do you honestly feel safe attacking there?

If your opponent has a creature, he or she can just guzzle up one of your attackers and carry on. Not to mention the original 4/4 comes out of nowhere as well, setting up another way to ambush beatdown decks. If you attack into untapped green mana, you're going to have a bad time.

So, what are the takeaways here?

Yeva's stats are playable, and her ability is strong in both beatdown and control matchups. Her legendary status might limit how many copies you want to put in a deck—but that depends on the kind of deck.

Speaking of decks, it's time for step two...

In the first step, you look closely at the card to identify how it compares to similar cards and where its strengths lie. In step two, it's time to get our green thumbs dirty and plant the seeds for decks.

How many decks can you think of using Yeva in?

In Standard, the first thing that comes to my mind is soulbond. Not only will your deck be full of soulbond creatures, but you can cast them at instant speed and put tons of extra power onto the table. Can you imagine an end-step Wolfir Silverheart? That's not an ambush anymore—that's a tactical missile strike!

You could also go the Green Sun's Zenith route—but with only twenty-two lands, I couldn't resist leading the stampede.

The play pattern of this deck is usually pretty simple: play creatures and attack! However, Yeva adds a wrinkle to everything. When do you flash her out? Once she's on the battlefield, which order do you flash out your other creatures in? She certainly adds some elements you wouldn't think about in a deck like this.

There are also a couple other routes you could go with a deck like this. If soulbond isn't your thing, perhaps you want to stay local with Yeva and use some of :

Just like in Magic 2011 and 2012 with the Planeswalker-referencing cards like Ajani's Pridemate and Liliana's Specter, in Magic 2013 we're doing the same thing to the five legendary creatures! Each legendary creature has a card at common or uncommon that is good on its own, but even better with the legend on the battlefield. 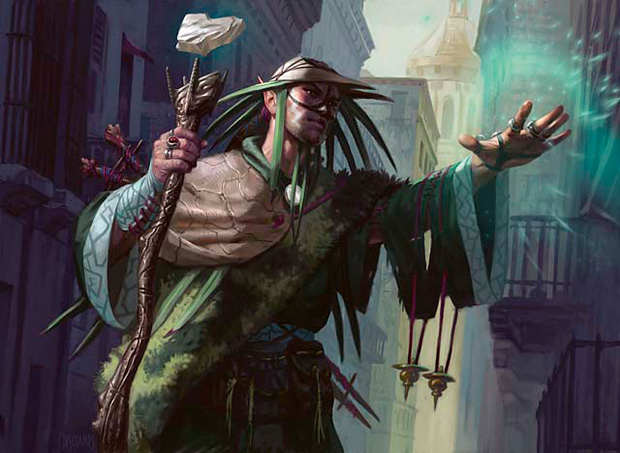 In this case, take Yeva's Forcemage. On its own, it's a sorcery speed +2/+2 spell attached to a 2/2 body—not too bad. But at instant speed, it can be a Briarpack Alpha-esque blowout!

The above decklist was something more experimental using soulbond. But considering green decks have been quite powerful in recent Standard, there's plenty of room to just slot Yeva into existing decks as well. Take a look at this red-green beatdown deck with Yeva:

In this kind of deck, Yeva is just a cool 4/4 for four with all kinds of interactions that open up thanks to her flash.

Does Yeva have a place in Standard? I'd certainly say so!

Now that I've shown you some lists, it's time for step three!

So you've analyzed a card and built some decks using it. Now what? Play Magic, of course!

Part of the joy of seeing a new card is having the opportunity to play with it. I've already had plenty of time to play with Yeva—now it's your turn. Use my above decks as models, build your own, or just download Duels of the Planeswalkers 2013 and start playing with her for yourself!

Play the Game, Walk the Planes

Duels of the Planeswalkers has some very exciting cards in it—including a bunch of new goodies and old favorites from Magic 2013. And in two weeks, I'm going to be previewing a card for you from that set! Build a deck to the following specifications, and your deck could end up being tweaked using a card from Magic 2013! Here are the guidelines this time around:

Format: Standard
Restrictions: Your deck must be all five colors.
Deadline: Monday, June 18, at 6pm Pacific Time
Send all decklists via email by clicking the "Respond via Email" link at the bottom of this article

Five colors? What in the Multiverse could this preview card be? Well, you'll have to check in two weeks from now to find out! Next week, don't miss the results of the open Standard challenge—there were a lot of really exciting decks sent in this time around.

If you have any questions, just send me a message on Twitter (@GavinVerhey) or leave a comment in the forums. I always love hearing from all of you—I read each and every piece of feedback each week.

Until next week, may you planeswalk to far off places.