A Few Minutes With Richard Garfield

ark Rosewater recently sat down with Richard Garfield to pick his brain about the state of Magic today and the game's run over the past five years. Here's what Richard had to say.

Mark Rosewater: What do you think have been the most fundamental changes to Magic?

Richard Garfield: There have been a lot of changes, so it's hard to choose the most fundamental ones. The ones that come to mind are the tournament system and the consistency of the sets. Those are related changes. The tournament system has led to a standardization of play that didn't exist in the beginning. In the beginning, some groups played ante and others didn't. There were groups that played with only one artifact per deck, while others played with no card limits at all. So I guess I would say the biggest change has been standardization across the board.

MR: What surprised you the most?

RG: I guess I never expected people to take it so seriously. I've always tried to bring science to the games I play, but I never expected it to be taken so far. In Magic, players now analyze percentages for various land mixes and use almost scientific approaches to sideboarding. It's all gone far beyond where I expected it to go.

MR: Some players now play Magic for a living. What do you think of that?

RG: That's a scary thought, particularly for me, because it's a lot of responsibility indirectly on my shoulders. But it makes sense since I view games as being an intellectual counterpart to sports, and plenty of people spend all their time playing sports. Magic sort of fills this vast void because there are far more professional physical athletes than professional mental athletes.

RG: Tournament formats have had a big effect on the game. There are many different ways you can play Magic, and the tournaments define the ones most people choose to play. For example, you could choose to play with five starter decks from your local store - informally without a tournament system. That's how I imagined a lot of people would compete. What the tournament system has done is establish default methods of play.

So now you have Standard, which uses the recent sets; Extended, which is all the reasonable cards you could play; Draft, Sealed, and Constructed in the most recent cycle of cards, and so on. On one hand, Magic is about different environments, so you want to have a lot of different environments. On the other hand, if you have too many environments, people can't find anyone to compete against in their environment of choice. I think the amount we have is about right.

RG: The Internet has had a huge effect on Magic since the early days. I believe the Internet is partially responsible for the fast spread of Magic, because it provided a community wherein people could explore the game. Magic is a lot less interesting if only four people in your area play. But if you're connected to the Internet, you have four people to play against and a world of people to discuss it with.

Recently the focus has changed more to analysis. Good decks and strategies are posted, discussed, attacked, and debated. Some people see this as a negative - or at least a mixed blessing - since maybe Timmy can now win a tournament using somebody's deck he got off the Net. But overall I think the negatives are far outweighed by the positives. The more you know about the game, the more interesting it becomes.

MR: There used to be a lot of mystery to the card sets. Now, we even publish card text in The Duelist. How do you feel about this information explosion?

RG: In some ways, the exploration of the environment never existed for the player who was willing to dig into the Internet. You couldn't keep people from posting complete card lists. I think exploration of an environment is still there for players who want it. Exploring the cards might be obsolete because of the Internet, but all the ramifications, the combinations...there are still plenty of decks for people to explore even if they do use the Internet as a tool.

MR: So what are your thoughts on current deck technology?

RG: Deck "tech" has come a long way. People have archetypes now and can immediately identify the strengths and weaknesses of cards. But the environment keeps changing underneath people's feet. So a good player will be able to look at a card in Urza's Saga and say, "Wow, this gives me this sort of card advantage and this sort of creature advantage." But it takes an expert player to figure out how it fits into the new environment. Maybe the beatdown game can't be done the same way in Urza's Saga. In that case, maybe your card evaluation techniques have to be reevaluated. There are still challenges whenever a new set comes out.

MR: Card design technology has also changed. Has it improved?

RG: Yes. Design technology has gone way up. The history of expansions is a sort of a history of random design flailing. But the more flailing we did, the more information we revealed, and that information was sewn together into a coherent tapestry. You might anticipate this would lead to cookie-cutter expansions. But actually, I think we've only increased our understanding that variety is part of design, and we need to get that variety without using too many rules. That's the ideal: minimum rules for maximum variety.

MR: So what game mechanics have you been happiest with?

RG: A lot of mechanics have intrigued me. One thing that really excited me was cantrips, which was a really simple idea - a card that gives you a card. That came about because we realized that the most important part of the cost of a card was the card itself. Cantrips were a really easy way to cancel out that cost. Encapsulating that as a technique was a great design tool. I'm also interested in things like buyback, which really changed the nature of the way the game was played. I like it when mechanics like buyback, cycling, and shadow get spread throughout the game, because they throw unique twists on the whole environment.

MR: What do you think of the concept of mechanics existing for a year and then leaving for a while?

MR: Have you noticed any fundamental changes to the way we make Magic?

MR: What do you mean by designing from the head and heart?

RG: Designing with the head is where you make sure cards are balanced, work within the rules, and result in interesting game situations. Designing with the heart is where you care about whether the card looks cool, fits into the story, and develops a situation that is interesting for some reason other than just the rules. When you have difficulty balancing those issues, you end up with cards that are cool but don't work, like Word of Command or Vesuvan Doppelganger, or you end up with cards that are overly technical - like the Homarids, with tide counters and all these calculations going on.

MR: Where should Magic go from here?

RG: There are all sorts of ways Magic can go, but I'm not sure it needs to go any further than the parameters laid down by Portal, the expansion-level complexity, and Unglued. You need Portal to appeal to people coming into the game. The expansion-level complexity allows for a huge variety of different cards and combinations of card environments. And Unglued allows you to pick up things you can't get in the previous two categories, like physical dexterity cards and cards that ask what you're wearing.

MR: What about ideas Magic has left behind, such as ante?

RG: I actually never thought ante would be played by more than 25 percent of the players. In some ways ante was killed by the game's own success. When people are buying $10 worth of cards, ante does what it's supposed to do - cause card flow and allow you to own cards you normally wouldn't own. But when card prices go through the roof, you don't want to play games for $200. So I don't think the concept was unsound. It was killed by the game's success.

MR: So, looking back on the last five years, what's your overall impression of Magic?

RG: Magic has certainly exceeded my expectations in just about every way. I have very few regrets about the game. Mistakes were made, but decisions were made with the best information at the time. So I don't regret seeing ante go; it was fun while it lasted. I don't regret that we created snow-covered lands or that I made unbalanced cards like Black Lotus. I think we made pretty good decisions with the information we had. 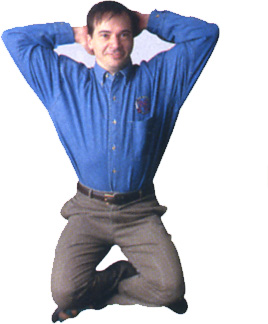 If I had been told five or six years ago how popular Magic would be - how big it would become - I would have had a lot of worries, especially about how to manage it. So, I am delighted that the support people - the designers, developers, and managers of Magic - have done such a good job of figuring out what makes the game tick and maximizing the good while working to get rid of the bad.

It was actually a long time before I listed Magic as the favorite game I had designed. I liked Magic, but I liked RoboRally better, or after that, Netrunner. I would return to Magic after [not playing for] several months, which happens occasionally, and be blown away by a new draft style, or tournament environment, or card set. I realized that Magic had done that to me again and again and again. Magic constantly gave me the variety that led me to create it in the first place. That's why I keep returning to it.