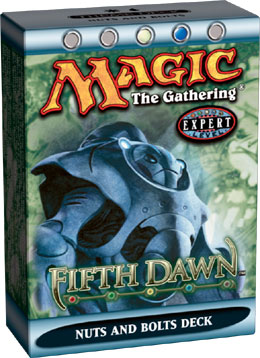 mall, inexpensive artifacts have been staples of the Magic game since its earliest days, but the Fifth Dawn expansion boosts their usefulness to another level. Cards like Auriok Salvagers and Leonin Squire bring cheap artifacts back from your graveyard and apply early attacking pressure. With sixteen artifacts that cost

or less, the "Nuts and Bolts" deck takes full advantage of your creatures' scavenging abilities.

The star of the deck is Trinket Mage. When it comes into play, you can search your deck for whatever little artifact you need, even an artifact land. Let the dumb kids play with the big, expensive creatures. Many of the best Magic decks rely on cheap spells, deck manipulation, and utility. "Nuts and Bolts" has these in spades.

Trinket Mage's partners in crime are Auriok Salvagers and Salvaging Station. They generate great card advantage by getting back the little artifacts you've already used so that you can play them again and again. Just keep your defenses up long enough to get about six lands in play and let these cards do their thing. You can recycle Chromatic Sphere to draw lots of extra cards, Sunbeam Spellbomb to gain tons of life, or Aether Spellbomb - the best artifact to reuse - to repeatedly return all your opponents' creatures to their hands, allowing your creatures to eventually walk in for the win.

Remember to play lots of creatures early and then use Trinket Mage and Steelshaper's Gift to find some devastating Equipment for them. Bonesplitter is always great, but the surprise gem of the deck is Skullclamp — one of the first cards you should search for. Not only does Skullclamp give your creatures an offensive boost, it also converts them into extra cards when they die. As the game progresses, Qumulox and Synod Centurion provide some beefy backup for your army.

If you need an offensive edge, consider adding a few copies of Auriok Steelshaper from the Mirrodin set. Since this creature reduces the cost of equipping a creature by

, it allows you to move many of your Equipment for free. It also gives all your Knights and Soldiers +1/+1 if it has Equipment on it. Extra Bonesplitters and Auriok Glaivemasters combine nicely with the Steelshaper, making your small creatures a force to be reckoned with. 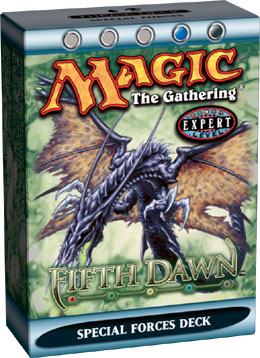 he creatures of the "Special Forces" deck are all mission specialists - the attackers have huge power and the blockers have enormous toughness. Creatures like Dross Crocodile, Plasma Elemental, and Emissary of Despair inflict devastating damage, while Steel Wall and Arachnoid hold down a rock-solid defense.

But what if your foe tries to stop your fragile 5/1 Dross Crocodile with a weenie blocker? That's where your specialized Equipment comes in. Slagwurm Armor and Ensouled Scimitar cover your attackers' weak spots, giving them massive defensive boosts to round them out. Whispersilk Cloak makes an attacker unblockable and untargetable, making its low toughness practically irrelevant. A Cloak-wearing Crocodile can win the game all by itself!

While the attack force is coasting in to smash your opponent every turn, the insane toughness of your defensive stalwarts lets you laugh off any counterattacks. The Equipment helps out here, too. Not satisfied with Arachnoid's 6 toughness? Try equipping it with Ensouled Scimitar or Slagwurm Armor to boost it up to 3/11 or even 2/12. When was the last time your opponent attacked with a Darksteel Colossus that just wasn't big enough to get through?

The "Special Forces" deck also has other cool Equipment combos up its sleeve. Vulshok Gauntlets's drawback doesn't mean much on a Yotian Soldier that doesn't tap to attack. Try Loxodon Warhammer on a Pewter Golem or Plasma Elemental to deal lots of damage and, hey, keep all that life for yourself. Myr Quadropod has high toughness or high power - whatever you need for your current situation. Try putting Ensouled Scimitar on Myr Quadropod and attacking with it as an innocent 2/9. If your opponent doesn't block, a quick switch of its power and toughness deals a punishing 9 damage.

One way to improve this deck is by adding artifact lands and various Nim creatures from throughout the Mirrodin block. Nim Shrieker becomes a 5/1 flier if you have five artifacts in play - a perfect fit in this deck - and toughness-boosting Equipment makes it a real force. Nim Devourer and Nim Grotesque are also fine options. Another way to go would be to add more powerful Equipment cards to boost your offense. Fireshrieker from the Mirrodin set and Cranial Plating turn your already powerful attackers into game-enders. 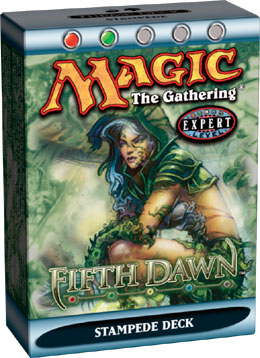 n case you've been in hiding for the last year, the Mirrodin block focuses very heavily on artifacts. Since your opponent is likely to throw all sorts of annoying artifacts at you, any deck you play in this environment needs to be able to handle them. One very good strategy is to pound your opponents into the ground before they're able to bring their artifacts out and use them, and the "Stampede" deck can help you achieve this goal.

The deck plays in a fairly straightforward manner and has a nice progression of creatures and spells. In the early game, play a few of your small creatures and get in some early hits. Between the direct-damage spells and the artifact destruction, you should be able to keep the board reasonably clear early on, allowing your small, unobstructed creatures to deal plenty of damage. Once you get up to four or five mana, start laying down the big monsters and attempt to win with size.

If the game stalls and you find yourself unable to break through for damage, you still have a few options. One of the "tricks" of this deck involves the combination of Rite of Passage with "pingers" like Spikeshot Goblin and Vulshok Sorcerer. By slowly inflicting damage on your own creatures, you can grow them to smash through the stalemate. If all else fails, you can fall back on Grab the Reins and Goblin Cannon to deal the last few points of damage. Other decks may have more late-game options, though, so try to keep the pressure on early to give yourself the best chance of a quick win.

The "Stampede" deck has a number of ways to destroy artifacts, but consider adding more if you play against a lot of decks using Mirrodin-block cards. The best anti-artifact cards to add are those that are also useful against decks that play with almost no artifacts (such as this one), so that they are never "dead" cards. The Mirrodin set's Molder Slug, Creeping Mold, and Viridian Shaman are good examples. 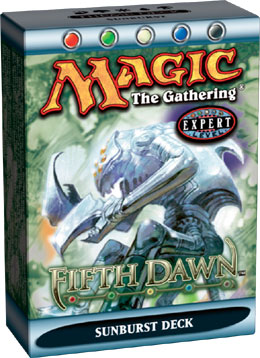 ne of the highlights of the Fifth Dawn set is the new sunburst mechanic. Artifacts with sunburst reward decks that play many colors of mana, and the "Sunburst" deck is set up to take full advantage. If you spend four or five different colors of mana on a card like Skyreach Manta, the results can be devastating. With a little luck and a Sylvok Explorer, you could have that 5/5 flier in play as early as turn four!

The key to winning with this deck is getting access to as many colors of mana as you can as quickly as possible to maximize the power of your sunburst cards. Darksteel Ingot, Pentad Prism, and Dawn's Reflection help your mana so that you don't even need to depend on drawing the right lands to power up your sunburst spells. An early Chromatic Sphere often nets you a card and an extra counter on one of your permanents.

The most important noncreature cards in the "Sunburst" deck are Energy Chamber and Infused Arrows. With an Energy Chamber in play, you can add a charge counter to your Pentad Prism to get more mana or just put another +1/+1 counter on an artifact creature to speed up the assault. Infused Arrows deals with your opponents' small attackers and gets rid of creatures with annoying abilities. It's also particularly nasty when combined with Energy Chamber.

In a deck designed to maximize the effect of sunburst cards, Etched Oracle is a 4/4 creature for four mana most of the time, which is impressive by any standard. Even if your opponent manages to deal with the Oracle, you can respond by using its ability to draw three cards. That's not a bad trade! Suncrusher and Sawtooth Thresher have abilities that make good use of their extra counters.

Play with the deck for a little while until you get a feel for how the mana is set up. Keep in mind that you want to have access to all five colors of mana by the fifth turn (or earlier). You can replace the basic lands with lands that produce multiple colors of mana or add a few Talismans from the Mirrodin set. After you see how much fun Energy Chamber is in the deck, you'll probably want to add more of these as well. Overall the deck is a blast to play—turn-four 5/5 fliers and unlimited charge counters are always fun!