now you've seen Future Sight, the third act of our 'nostalgia' block. Since Matt Cavotta was generous enough to offer me a guest slot here on Taste The Magic, I'm going to use this chance to talk about the whys, whos and hows of this set's readily apparent and striking visual differences.

To hit the "good-ole'-days" notes that Time Spiral had to hit, we employed the comfortable past. Past names, past art, past frames, past concepts, past places. We had rules to do it. (Then) Art Director Jeremy Cranford instituted the no-new-dudes rule, for example. With the excitement over the re-appearance of some past set faves, most of you may not have noticed the conspicuous absence of some of our more recent additions to the 'stable.' If an artist was too recent an addition to Magic's visual landscape, they were given a breather. Time Spiral didn't want the new and the new it does not have. It wanted names that wore the robe of nostalgia, and we delivered. Where did we break this rule? Two words.

Early in our talks of tone and vibe, obscured horizons and things unseen through the thick, noxious clouds, my concept artist predecessor D. Alex Gregory had shown me some images that he hand selected of Craig's work as validation and inspiration. After I cleaned out my pants I ran to Cranford and did my best excited-two-year-old-bathroom-dance while showing him these examples of Craig's work. It was too on-the-money to pass up. We contacted Craig and his rep on a long shot, and he accepted! It broke our no-new rule, but when the fates are smiling you don't dare avert your eyes from their stylish, painterly teeth. Just too hot to pass up.

Okay, so that's the past. What's the future? Well, the opposite of all of all that, of course. If Time Spiral is a look over the shoulder, then Future Sight had to be a squint into the distance. Not comfortable and bye-gone, but rather challenging and biting! New frames, names, places, concepts and card types. And not subtle. No sir, it had to read. It's the entire crux of the set. As unsubtle as straight-up reprinting cards of yore is, we had to hit this visually just as hard. If it's timeshifted, brother you had to know it. Planar Chaos, after all had the middle ground... the viable, alternate frames and art that still relied on the design and tone of contemporary Magic to feel connected to the game and just a bit "alternate" or lateral. We were heading somewhere else now. Edgier art, frames that interact with that art differently, names that have NEVER appeared on Magic cards, and this time the breathers went to the names which donned the cloak of nostalgia. Again, where did we break this rule? Well, we mined the hell out of the art "Graveyard." It's sad and frustrating to watch good, homeless art sit and stare pitifully at us from our Multiverse database. The timeshifted cards' imperative of "each card a disconnected visual of a potential future direction" is the exact opposite of our normal constraints in which it is very difficult to "plug in" Graveyarded art because it no longer represents the block's tone, designs, characters or flavor. It was too perfect an opportunity to grant good homes to art that needed it, and some of this art came from artists whose names do indeed have footprints that go far back into the game. Rescuing art by Rebecca, Donato, and The Brothers Hildebrandt did undermine our topline push for the non-nostalgic, but the opportunity was too rare... too good to pass on.

Our other high profile rulebreaker is our Prerelease art of Korlash, Heir to Blackblade by RKF. After tasking Magic newbie Daarken to create a character worthy of the Blackblade's heft, and to do so in a way stylish and evokative enough stand toe-to-toe with RKF's enigmatic original Dakkon painting (all of which he did beautifully), it was flagged as the prerelease card. The opportunity to let Richard himself paint the Blackblade again was just too hot to pass on. So pass I did not, and paint Richard did, even though I knew full well I was sawing at my own style-of-Future Sight hamstring a bit. It was worth it.

As we close out our talk on bookends, let's take a second to appreciate how perfectly Craig's devastated lands are given up-beat closure by our glimpses of their recovery in Future Sight.

The Sweet Taste of New Blood

Ooo, that sounded dark. You know what I mean... the sweet taste of new eye-blood. The new guys! There we go. If "the nostalgic" is shelved for a set, where do you find not just the "new," but the "new" that LOOKS new?

Again, Planar Chaos's gags were frames and artists that were, in fact, new visual introductions, but felt already at home in the game. Future Sight couldn't be that again. The artists came from all over the place. I had been aware of Eric Fortune's work since a GenCon years ago that I attended in my past civilian life as a wildly underrated visionary watercolorist. (Yes, I was laughing while I wrote that, please don't send me hate mail to knock me down a peg. There's no need.) Omar Rayyan and I had worked on some of the same publications damn near a decade ago, and I have remained a fan of his incredibly stylish work ever since. I saw Anthony Francisco, Jason Chan and John Donahue's portfolios at last year's San Diego Comic Con. D. Alex Gregory now works with Chris Anderson and had him shoot samples my way. Esad Ribic's LOKI graphic novel blows my mind daily (still) so I stalked him down and twisted his arm into working with us all the way from Croatia. Philip Straub grabbed my eyes with his work selected in Spectrum. I saw a piece of packaging art that James Kei had done that was sitting on a shelf at GenCon. Aleksi introduced us to Jean-Sébastien Rossbach. I knew Daarken and Nils from their exceptional Hecatomb work. Michael Bruinsma simply submitted work to our artdrop address. I saw it and the rest is histor... umm... future. Simply put, all the stops were pulled out and painters were hunted down like Jedi.

Wow. That was terrible too.

We needed frames. That felt new. And for some new card types, no less. They had to be as different as the Time Spiral reprints were familiar. Fellow Wizards Art Director Robert Raper was tasked with working directly with our graphic designers to produce this new marvel. My topline was ergonomics (you can listen to me rant about this in our Future Sight Podcast). Ergonomics seemed the perfect way to show a visual progression, be very different, and accomplish 'future' without hinkey sci-fi tropes. How could we arrange information in a new way to make as much accessible both at a glance and across "the fan" as possible? What are new ways for the elements of the card to interact with each other? We found answers. Within a fan of future-shifted cards you can see card type (the new icons), cardname, color, and mana cost (with the colorless costs conveniently lined up). 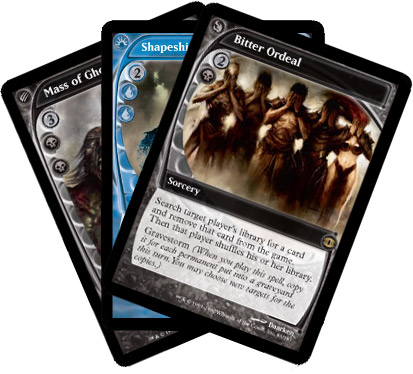 We found new ways for the art to play with the mana cost and the text box and still held true to traditional "beats" within Magic's visual design (color associated texture, for example). Do they take some getting used to? Absolutely! If that answer had been "no," we would have failed. The previous sets were the comfortable and then the alternate but familiar. Future Sight had to push into the challenging.

If we were really looking for a permanent new and upgraded frame we would have approached it very differently, more subtly and consistently with the game's roots. That wasn't the problem we were solving. Love 'em or lump 'em, you can't say they don't come across loud and clear as a blatant new direction, reimagining their uses and components... much the same way the new keywords accomplish this goal mechanically.

Thinking Outside the... Oval

Well, we have painters and we have frames, what do we have the painters fill the frames with? One of my favorite things about this set is the breadth it wanted to have—more freedom of concept, more freedom for artists, more diversity. It's no secret that I like more "spellish" spells. I hate looking across my hand and seeing sorceries that look like creature cards. I really hate playing an aura that shows "just a dude" on my creature card that shows a dude. We got to test these waters with Future Sight. What's a black spell that forces a card from your opponent's hand back down into his/her library? It's one mage blasting another with a purple headache, right? Hell no! It's a stylish metaphor of a brain textured sundial and the dark shadow that bites across the brain-surface of course.

What's a white spell that accelerates or decelerates a suspended card? It's a chrono-mage manipulating the emergence of a large creature through that good ole' blue suspend barrier, right? No way. It's a representation of night and day slipping through the fingers of that chrono-mage as he manipulates the sands of time.

It's stylish, it reads across the table, and I bet you won't mistake the ole' orange brain-dial for one of your Zombies. My favorite concepts? This is clearly more the artists than the concepts, but how ridiculously happy does it make me that within blue, the color of "screwing with you," we managed two illustrations that screw with you? Both Foresee and Mesmeric Sliver play some eye games. Big ups to Ron and Mike for their incredible salesmanship!

Which Noodles Stick to the Wall?

Do the new artists go away? Do the new planes come back? The broader concepts? The blue cards that screw with your eyes? Is none of this "for real"? Oh my friends, some of it sticks. Some of these timeshifted cards are indeed a cardboard window into tomorrow. Future settings are there in your hands right now. Some images were painted specifically for upcoming settings. Some of the artists were specifically selected to reappear in upcoming sets. There are plants and there are patsies. I'll bet the art and artist dividends start clinking into your pockets (your, umm, eye-pockets) as early as Tenth Edition. Time will tell.

(You know you had the posters.)

Here are the new guys:

Guys that have actually done cards before, but you might not recognize: