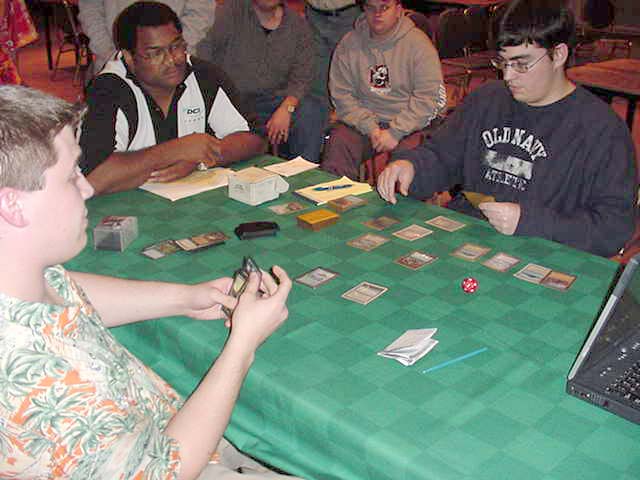 Vowing to avenge his fallen brother, Ben Rubin, Brian Kibler stood as the last, best hope of the Super-Gro players. Kibler's love affair with 6/6 flyers has continued into this tournament. Only this time, his beasts only cost four and have protection from black. Playing the stylish and powerful Super-Gro deck, Kibler cruised to the Top 8, where he got revenge on Bob Maher, Jr. and William Jensen, his only losses in the swiss. Now he sits across from Josh Smith, an amateur (though he earned two byes on rating) from Boston, playing a rogue blue-black-green control deck that's been savaging Gro variants all weekend.

The tone for the first game was set early when Kibler uttered the unfortunate words "I am forced to enter my Discard Step." Three turns later he'd found a Land Grant, showing two Forces, two Looters, two Werebears, and a Plow. Smith Forced. Kibler chose to protect his Grant with Force of Will. He fetched a Tropical Island, and played Werebear.

Smith tried a Deed, which Kibler Forced. He Wasted Kibler's Tropical to slow the flow of Bears. Kibler chose not to overcommit, swinging with his Bear. Deed number two resolved, and cleared the board. Brainstorm turned up nothing for Kibler, and another Wasteland kept his mana pinned. Then he did it again. Said Kibler, "That's a lot of Wastelands." 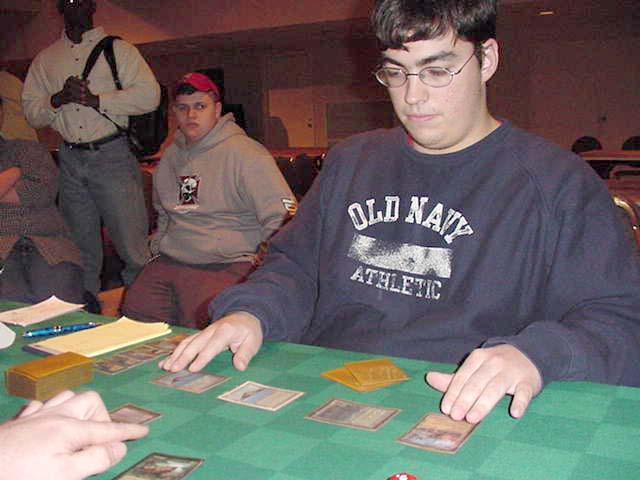 Fact or Fiction gave Smith two land and an Edict. He signed up superstar Jon Finkel, and protected him from Plow with Counterspell. Duress stripped Kibler of his second Plow. When Deed resolved, it looked like it was over. But then, Gush, Werebear and Plow all resolved. Another Duress took a second Gush and saw only lands and a Werebear. Wasteland and Edict left Kibler permanentless. "I like my side of the board." said Kibler.

Smith didn't have much speed going for him, just a Faerie Conclave serving for two in the air. Duress showed him Kibler was holding four green creatures with just basic island on the table. Kibler Brainstormed into Tundra. Smith declined to Waste the Tundra. He was forced to blow up his Deed by Kibler's Winter Orb.

He was still hitting for two, though, and Kibler was just sitting there. Smith Forced a Land Grant, then put Finkel into play, a move Kibler called "Nothing short of obnoxious" before scooping.

Kibler's hand for Game 2 was Force, Gush, Gush, Brainstorm, Mage, Looter and Land Grant. He Granted up a Tropical unopposed, and Brainstormed into Tundra and Plow. The Mage hit play and blotted out Powder Keg. Duress took Force of Will, but Kibler just Gushed into a second Mage, this one stopping Pernicious Deed. 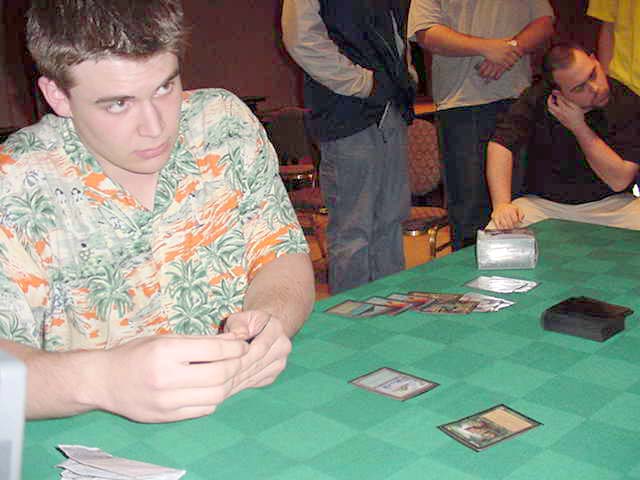 The twin Pikulas hit Smith to fourteen while he wasted Kibler's Tundra. It was okay, Kibler had another. Smith Submerged the Mage naming Deed, but Kibler had the third Mage in hand, who subbed in immediately. Smith Fact or Fiction got him an Edict and a land, but the knowledge let Kibler add a sacrificial Looter to his side of the board.

Desperate, Smith tapped out for Morphling. He Forced the first Plow, but there was a second. Finkel ran up to play defense. Submerge bought him time against Enforcer. The Enforcer came back, and they were on to Game 3.

Smith's draw for Game 3 was nuts. He led with double Duress, taking Force of Will and Gush. Then he tapped out for Finkel. Kibler foiled with Looter and Tropical. Smith calmly Forced.

Smith timewalked with Submerge and got Keg into play. The Looter couldn't get Kibler's draw going. Smith played Fact or Fiction, and the cards came down Force of Will, Annul, Annul, Keg, Submerge. Kibler was taken aback. "You're joking, right?" Smith responded with an easy "I do what I can." 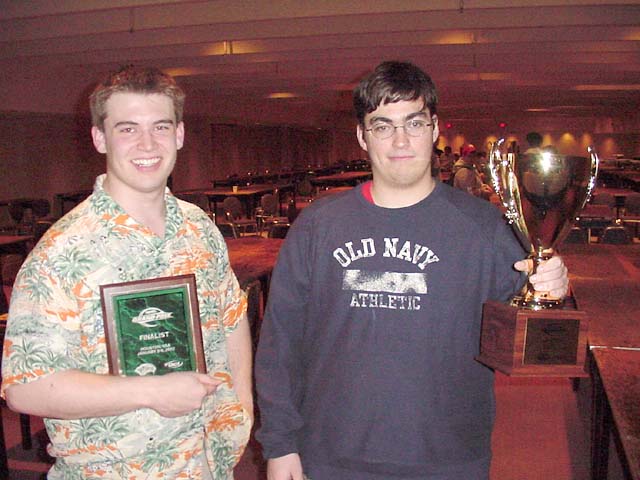 He got another Keg and Submerge. He put the Looter back immediately and Wasted Kibler's third land. After Kibler replayed his Looter, Smith Kegged it. The second Keg hit play. Meddling Mage naming Counterspell found an Edict. The same went for Werebear. Said Kibler "This is one rocky boat we've got."

Finkel found a friend, and now Kibler's way was sliding from bad to unrecoverable. When Smith played Impulse, Kibler lost it. "How did you fit all that stuff in your deck? Did you sideboard into seventy-five cards? I don't think that's legal." Finkels number three and four showed up shortly thereafter, and rather than wait the extra turn to die, Kibler Waxed one of them.