Rickard went first and got off to a slow start, with too many coming-into-play-tapped lands, and got hit four times by a second turn Kavu Titan, going down to twelve while he looked for something to do. 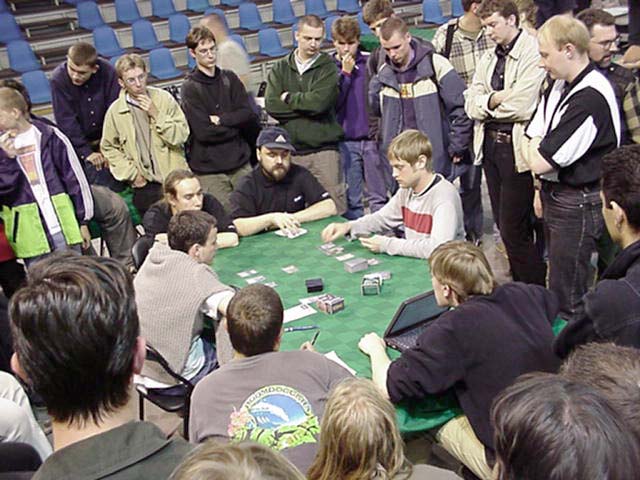 Eventually he summoned a Spectral Lynx, and used Dromar's Charm to force it through. Even then it was Repulsed, and the Kavu Titan got through another two points of damage, putting the Swede on only ten life.

Next turn Österberg replayed the Lynx, as well as casting a Gerrard's Verdict, which gained him three life as a Shivan Reef was among the discarded cards. Once again the Lynx was Repulsed and the Kavu swung in for two again. This time when Österberg attempted to recast the Lynx, Michal attempted to counter with a Mystic Snake but this was Gainsayed.

Now the Czech player was out of Repulses, and decided to go for direct damage, casting an Urza's Rage to bring Rickard down to eight, and then again in the next turn to put him on five. Finally Michal found his fifth land, a surprisingly long way into the game, and cast Kavu Titan with kicker. Being tapped out against the deck Rickard is playing is bad though, and at the end of the turn, Rickard Routed, then untapped and played Desolation Angel. Two turns later, Michal had to concede.

Marcik sided out two Fact or Fictions, an Urza's Rage, and a Prophetic Bolt, for his four Gainsays, whereas Rickard found room for his Gainsays by taking out Probe and Recoil. He also brought in his Slays, of course.

Marcik didn't draw any early creatures in game two, only burn, which is quite bad news for him as it allowed Österberg to get plenty of lands into play. Marcik finally played a creature when Österberg tried to Verdict him - it was countered by a Mystic Snake;

Rickard played a Spectral Lynx, but it was Repulsed and the Snake dealt the first damage of the game. The Czech player gained further card advantage by Repulsing his own Snake when Rickard attempted to Slay it, and then Excluding the Spectral Lynx.

Österberg had two further Lynxes in hand though, and played them both. Unable to block the cats, Marcik went to the head with two Prophetic Bolts instead, putting Rickard on eight, so both players were dealing four damage a turn, and Rickard' attack left both players on eight life, but he was the one with creatures in play.

Michal played a third Prohetic Bolt that reduced Rickard to four, and then played a Gaea's Skyfolk. The Lynxes attacked again, and now both players were on four life. The Swede an Emblazoned Golem, and Marcik Urza's Raged him down to one.

The Skyfolk attacked next turn, and although Rickard had a Rout, Michal could counter it with a Mystic Snake to win the second game

Rickard had to mulligan in game three - his opening hand was seven land! Michal had the opposite problem as his land was a single Shivan Reef. Both players kept their six-card hands, and the final game of Grand Prix Warsaw got under way. Michal made a turn two Blurred Mongoose, but Österberg had to wait until turn three to cast Gerrard's Verdict due to his Coastal Tower.

The Mongoose got in a couple of hits before it's onslaught was halted by a Ravenous Rats. Michak attempted to Mystic Snake the Rats, but that was Gainsayed. Michak then dealt with the Rat with the last card in his hand - Prophetic Bolt. Still Rickard was in control, as he had two Spectral Lynxes in his hand. Marcik only had a second Blurred Mongoose which was no longer a threat.

Michal drew a Kavu Titan and played it with kicker, but it was Slayed, and Österberg attacked repeatedly with one of his Lynxes. Once Michal was down to lower life than Rickard, both of the Lynxes started to attack, and three turns later, Grand Prix Warsaw went to the Swedish Rickard Österberg.