treefolk are Lorwyn's most ancient race, having put down roots on the plane long before there were kithkin living in rustic clachans or elves setting up palaces and claiming to own the place. Treefolk are also the plane's longest-lived race, unless you believe what some giants say. The rings of a treefolk are its woody shrine of memories, and today we take a look at Lorwyn from the perspective of some of that seriously wise xylem and phloem.

The character and role of an individual treefolk on Lorwyn is mostly determined by its species. Most treefolk are ash, black poplar, rowan, oak, and elder trees, although there are a few individuals of other species, including yew, birch, and blackthorn. 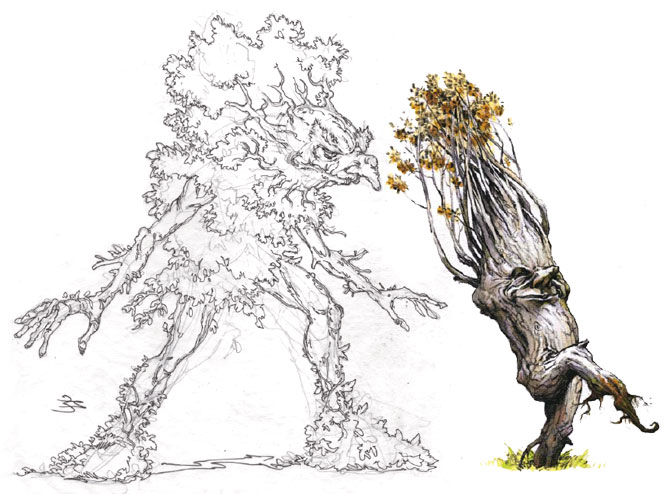 Treefolk are born from seeds like any other tree of their species, but at a certain stage in their development—the triggering conditions of which are mysterious to all but the most learned ash seedguides—the trees gain sentience and motility. This event is known as the Rising. Some treefolk religious theories hold that a treefolk Rising is the result of being seen through the forest by the sun, but many trees grow and flourish under the sunlight for centuries and never Rise.

Treefolk do have two distinct genders, though the difference is subtle and largely academic to the other races. Until a treefolk undergoes the Rising, it is indistinguishable from any other sapling, and thus gets no more attention than any other sapling. That's why orchard wardens and seedguides nurture all young trees equally.

Once a treefolk Rises it becomes a full, participating member of its grove community. Other treefolk will nurture the newly Risen tree and instruct it in the ways of the world. Most treefolk then choose to pull up their roots, shake off the earth of their birth grove, and leave to wander the plane. 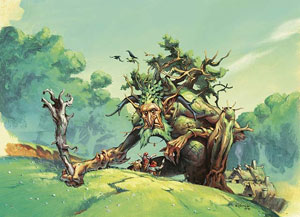 Treefolk don't have individual, unique offspring like elf or kithkin parents do; their seeds generate hundreds or even thousands of saplings during their long lives. In turn, the treefolk emotion of love is more diffuse than that of humanoids, which leads to their more communal approach to rearing the young. The treefolk caretaking attitude spills over onto all the creatures that live in or around the forests, as well; even in places completely inhospitable to treefolk, some trees can be found serving as protectors and teachers for any sentient being they encounter.

However, as individuals, treefolk can display just the opposite attitudes. There are as many belligerent recluses among the tribe as community-minded nurturers. Many an unwary traveler has approached a treefolk for advice, expecting a nugget of wisdom, but instead receiving a clobbering with knobby branches. 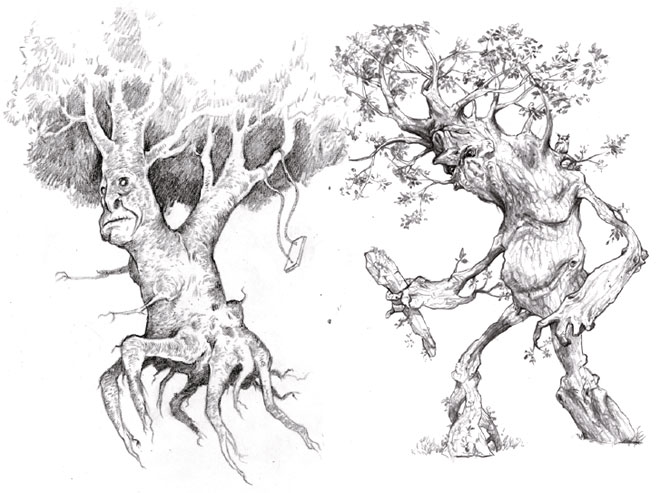 Wood Is Wood, Not Flesh 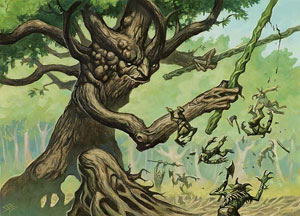 Treefolk are talented woodworkers, and use tools themselves crafted from wood. While treefolk consider it wrong to kill a living tree, they have no qualms about crafting and using wood made from trees that have died. Furthermore, many species of trees are perfectly capable of regenerating from careful harvesting of branches, and treefolk use such wood extensively. Even their own bodies can be sources of material. Warrior treefolk are particularly likely to have weapons and armor crafted from tough wood. It can be a point of personal honor for an oak warrior to craft his staff or cudgel from part of his of her own body.

Doran and Colfenor aren't the only famous treefolk of Lorwyn. Whispers can be heard of these other legends of the treefolk community.

Flann and Fionnsutha, the Wanderer. While most ashes tend to stay in one place for long periods, Flann wandered the world for her entire life, almost never returning to her grove. Flann was a wielder of powerful magics, and many sought her for advice. Flann was killed in a forest fire recently, and a young ash named Fionnsutha found her as she lay dying. Flann passed the mantle of Wanderer to Fionnsutha, as well as her bag of magical tools, but little knowledge. Pilgrims still seek the Wanderer in search of answers, but Fionnsutha gives them much more cryptic advice than Flann did, lacking the worldly wisdom of her predecessor. 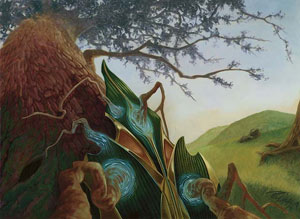 Adair River Span. Eschewing weapons, Adair River Span is a mighty oak monk who wanders the forests seeking out opportunities for proving his prowess in combat. Stories are told of how he once fought two giants at once, reducing both to tears, one with his fists, the other with his insults. It's said that on a bet he once dipped his roots into the Honeystone River and drank it dry. Adair is a good friend of Flann and is currently seeking her. He doesn't know that Fionnsutha has take over the mantle of The Wanderer.

The Sunrise Brake. An organization of mostly rowan treefolk, the Sunrise Brake is devoted sniffing out and destroying the unnatural or artificial. They are nearly fanatics in their opposition to metal, and their larger goal is discover the location of the Faerie Queen, Oona. 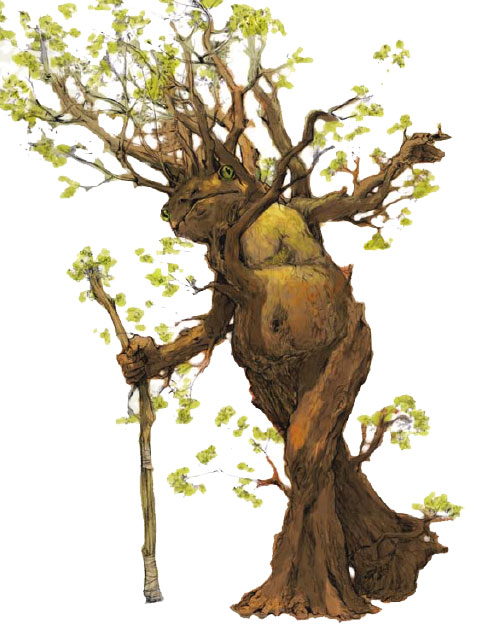 All forests on Lorwyn are the province of treefolk, but some groves are especially important to them.

The Murmuring Bosk. Deep in the heart of Lorwyn's vastest forest is a truly ancient grove of trees. Even relatively short-lived species have representatives here. While the trees cannot think, treefolk can empathically understand them as though they could speak. The Bosk is a repository of untold thousands of years of forest life, and the treefolk archdruids who tend the Bosk are able to retrieve bits of that wisdom as needed. 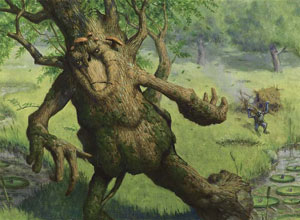 Porringer Valley. The largest single community of ash treefolk live in Porringer, a broad valley cut at its base by the Wanderwine River. It is pleasant and safe because the sheer number of ashes mean that virtually no large threat can exist unopposed. The boggarts love to sneak into the Valley and play tricks, because the ashes often fail to even notice them.

Treefolk are Lorwyn's living repository of experience and lore. Treefolk treasure the experiences embedded in their rings as much as boggarts treasure their hoarded trinkets or elves treasure their own beauty. While their secrets are usually freely given, treefolk aphorisms are rarely understood by the footed folk; it takes the lifespan of a treefolk to understand the sweeping perspective of a treefolk. At its heart, a treefolk's life is based around simple needs: sun, soil, companionship, and water, all of which Lorwyn has in abundance.