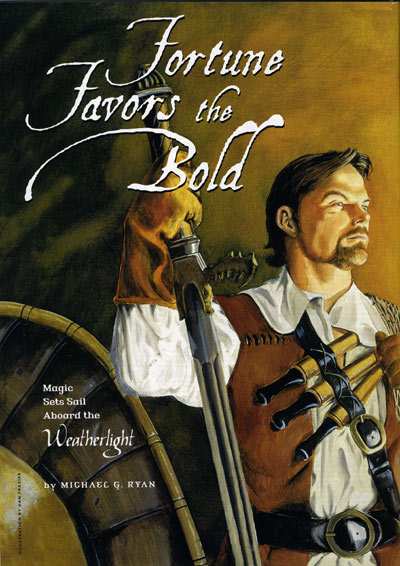 Following the sun we left the old world.
-- Inscription on one of Columbus's caravels

the story of Homelands ended, the tale of Baron Sengir came to a close. The legendary Urza and Mishra have all but faded into history, though their artifacts occasionally filter their way down to the present day, and Lim-Dûl and Freyalise are only distant memories. Now, as we leave Jamuraa behind, the characters from the Mirage setting are about to disappear as well, leaving something of a void in the development of the worlds of Magic.

From the comics to the novels to the online encyclopedia entries, many of the stories of Magic are connected only by the backdrop of the multiverse itself, with its minotaurs, elves, goblins, angels, and myriad other races. But in truth, a Serra Angel is not really a character -- she has no name, she has no personal background, she has no friends or enemies. She has only an image to offer players, and an image is no longer enough.

Late last summer, Mark Rosewater and I began a discussion about the necessity of long-lasting stories. Why do worlds like Star Wars, Star Trek, BattleTech, and Dragonlance capture the enduring attention of their fans? What sorts of characters, settings, mythologies, and plots push the envelope and make for exciting tales of adventure in these environs? At the same time, members of Wizards of the Coast's Continuity team were having a similar discussion, and were doing in-depth research into the specific archetypes that build these worlds.

Mark and I then set out to develop a story arc that would not only address the "classic" archetypes (character, setting, plotting, and themes) but would engage Magic players in a way unusual in trading card games -- through multiple media. We wanted to tell some of the story through the cards (emphasizing strong integration of card mechanics, art, card names, and flavor text), more of the story through various short story venues, and still more of the story through novels or comics. Each medium would contribute an integral piece to the whole. We wanted special tie-in products to support new characters, unique artist interpretations of these characters, and the possibility of expanding into a wide variety of unexplored media. And through all of this, we wanted to maintain the spirit of excitement that Magic fans expect: high quality art from the most talented artists working today, unexpected twists on familiar themes and plots, and cohesion between game play and story. Add to this some creative surprises from the designers and the return of some traditional Magic settings like Llanowar and Benalia, and you have the ingredients for epic storytelling.

Traditionally, however, epics span great distances and explore uncharted realms (consider The Odyssey or Lord of the Rings). We knew we wanted to take our characters to a dark shadow world, to the keep of a servant of evil, and to a plane where all the world is a market and anything can be bought -- for a price. We also knew that we wanted to tie our most recent stories together with our future tales.

Enter Sisay, captain of the Weatherlight, who joined with Mangara and his allies to defeat Kaervek in Mirage's Jamuraa.

Or, rather, exit Sisay, captain of the Weatherlight.

Have Ship, Will Travel

has been kidnapped. Her crew turns to the one man who is both indirectly responsible for her capture and capable of her rescue -- Gerrard, a Benalish master-of-arms who abandoned Sisay and their mutual quest years before when the burden of responsibility became too much for him. Gerrard, however, may not be ready for such a task, no matter what he thinks. 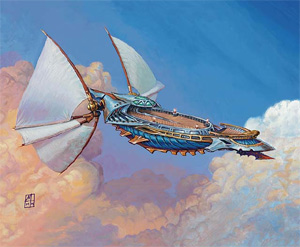 Mark and I recognized right away that the flying ship Weatherlight was an incredibly strong means of transporting us from place to place (or plane to plane) as our story developed. Equipped with a wide variety of unique artifacts (including many strange ones left over from the little-known Thran empire), the Weatherlight was more than capable of transporting our diverse cast of minotaur, goblin, cat warrior, golem, and vampire to ports unseen. Our crew was in place; our captain was at the helm. But what would serve as the impetus to get our adventure started?

We explored many options, analyzing all the elements necessary for creating a solid story: a strong hero, an ambitious villain, and character motivation to carry the story along. At length we realized that a significant sacrifice was needed to really draw players in, such as the loss of Sisay, a character already known to fans of Mirage and Visions. Abducted by Volrath (a servant of the Lord of the Wastes, the mythological embodiment of all evil), Sisay serves as bait to draw forth Gerrard, whose parents were strong foes of the Lord of the Wastes. Gerrard is now the heir to the Legacy, a legendary gathering of artifacts which can collectively destroy the vile Lord of the Wastes.

Gerrard's destiny has always been tied to the Legacy, and from the beginning, Sisay knew of his perceived "responsibility" to take up his heritage. While Sisay raced to challenge the Lord of the Wastes, however, Gerrard went off to chase separate adventures. The loss of a childhood friend to the Lord of the Wastes' machinations convinced him that he and Sisay no longer shared the same ambitions. As a result, Gerrard ended up pursuing his fortune and glory across Dominaria, from the deep swamps of Urborg to the sun-drenched docks of Benalia. Our story begins there, in Benalia, as the crew of the Weatherlight -- most of whom served alongside both Gerrard and Sisay -- seek out their former friend to demand his aid in rescuing Sisay from the Lord of the Wastes.

With a strong protagonist in Gerrard, we made sure that the characters around him were equally strong in their own unique ways. The multiverse of Magic is filled with memorable races, and that diversity is well represented in the Weatherlight crew. From Tahngarth, the minotaur who owes more loyalty to the memory of Sisay than to the presence of Gerrard, to Hanna, the ship archivist who felt betrayed by Gerrard's departure years before, we made sure the relationships among the crew were engaging, deep, and challenging. How does Mirri the cat warrior get along with Squee, the goblin cabin keeper? How does the cursed Crovax fit into such an odd assortment of travelers? What do the other crew members think of Karn, the silver golem, knowing that he is actually part of the Legacy of artifacts? The possibilities of interaction hold as much promise as do the risks of rescuing Sisay.

ensure that the voices of our primary characters would be consistent in tone, structure, and intent, we took a new approach to flavor text. In the past, flavor text has been written by many different people, sometimes as many as twenty. Some writers drafted one or two pieces, others drafted dozens. With the addition of long-term characters to the Magic multiverse, we knew the parameters of such writing would become more difficult: not only did flavor text have to convey a bit of story or character, a little humor or pathos, or an insight or absurdity (all of a brief, specific length), but now it had to convey a consistent voice. Squee the goblin must sound the same each time he speaks; Ertai, the untested wizard who joins the crew late in the game, must stay within the parameters of arrogance that have been established for him.

To get these characters developed to a point where others might imitate them, we chose a select team of authors, and asked each to develop one or two unique voices. Thus, six writers -- Melody Alder, Kij Johnson, Mark Rosewater, Pete Venters, Jennifer Clarke Wilkes, and I -- handled all the voices for the Weatherlight expansion. The result was much stronger character development. Each of these authors will do additional work in future sets, expanding the voice he or she has already begun and taking on new ones as our story develops. Look for some of our secondary characters, like Squee, to become more important in the future.

Every Port in a Storm 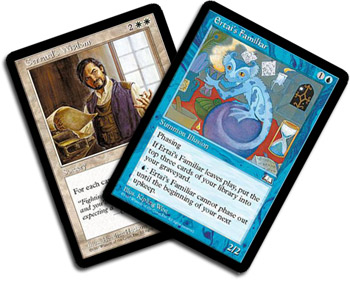 the tale of Gerrard and his quest to rescue Sisay unfolds, players will have plenty of opportunities to get to know the characters and the plot through a number of different outlets, starting with the cards themselves. Beginning with the Weatherlight expansion, players will find cards named for characters, like Gerrard's Wisdom or Ertai's Familiar. Characters will begin to appear regularly in the art (see Who's Who Aboard the Weatherlight for specific card references) and they will be interpreted by many different artists, but always with a consistency that makes them readily identifiable to players. Additionally, the cards themselves will become more and more integral to the story. The Null Rod, for example, will play an important role in a future plot development.

Cards will appear in other storytelling venues as well. The Benalish Missionary, a common white card, appears in the short story in this issue, and future stories will include additional cards that players have become familiar with. These stories will appear online, in The Duelist, and in other outlets, beginning this month. Novels are already being planned to tell the tale of the Weatherlight saga, and these, too, will feature additional links to the expansions themselves.

Carrying this concept a step further, a special project is underway that will allow players to build decks around a given character. A player fond of Mirri the cat warrior, for instance, will be able to construct a deck based around certain characteristics unique to Mirri, who will be represented in a special oversized card. Look for one of four of these outstanding character cards in issue 18 of The Duelist, and eight more different cards through your Arena league this summer.

and I plotted a story that lasts into the year 2000. We worked with a wide variety of people -- flavor text authors, the Continuity team, the Magic editors and Magic team, the art directors, the Book Publishing team, the marketing reps, and outside consultants -- to ensure that we give players the most exciting storytelling experience possible. We will continue to explore other avenues for reaching players.

As the Weatherlight and its crew set sail, I believe that Magic players are in for the ride of their lives -- a ride that will take them beyond Dominaria, beyond the cards, and beyond their expectations.

Where to Find Time Spiral Remastered Previews by, Wizards of the Coast

Time Spiral Remastered previews are upon us! To help our readers and preview seekers, we've created this handy guide to preview season. This page will help you follow along with everythi...

The First Lesson: Introduction to Strixhaven by, Blake Rasmussen

Welcome, students! In just a few weeks, class will be in session at the prestigious Strixhaven: School of Mages, and we're so glad you've chosen to begin your mystical studies with us! Y...