, Johnnies, Spikes, and other huddled mass-types yearning to see previews. For those of you who just want to see the neat new card (and I promise it is all three of those things), you'll have to go hunting for it, Easter Egg-style. For everyone else, please allow me to natter on for a few more paragraphs in order to ratchet up the suspense. 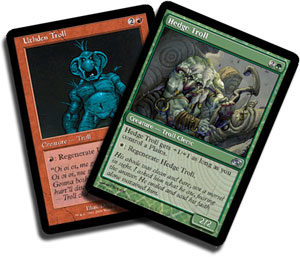 If you've been following along at home, you'll know that each of the sets in this block has a series of "timeshifted" cards. In Time Spiral, a set that represents Magic's past, some of these cards featured abilities that are no longer in that particular colour's repertoire (Psionic Blast, Uthden Troll, Witch Hunter). Then, in the "alternate reality" of Planar Chaos, each colour got to borrow some tools from its neighbours (but don't worry, they'll probably have to return them). These are tools the colour might've had all along, if only the cookie (i.e. the colour pie) had crumbled a little differently (Damnation, Harmonize, Mesa Enchantress). Now, in the speculative future of Future Sight, each colour's timeshifted cards don't just show off some piece of the pie that they used to have, or simply trade pieces of pie with another colour. This is more like some fancy, new and improved pie, made with a dash of necroleum and a pinch of cryo. It's a freaky post-apocalyptic mutant pie. Yeah, you can still see the Statue of Liberty, so you know you're not too far from home, but the people are apes for goodness sake!

Seriously, I have seen the future of Magic: The Gathering, and its name is, uh, Future Sight. Oh, you don't believe me, Mr. Skeptical? Well, what if I told you that my preview card costs

Blah-blah-blah, we've seen that, like, eighty-one times before. Can you get any more boring?

And it's an Enchantment.

Yeah, but this isn't just any Aura. You don't put it on some Elf Rogue or on your opponent's Urza's Tower. You put it on Gifts Ungiven, or Urza's Rage, or, I don't know, Heroes' Reunion.

What if I told you that the first line of text on this card was "Enchant instant card in a graveyard"? That's right. :

The rules FAQ entry for Spellweaver Volute is a bit long, but it's riveting reading. I especially like the part about how you get to attach the Volute to a card in a different zone. Call the physics majors!

As often happens when I see a new card for the first time, I didn't quite realize what Spellweaver Volute was capable of doing. When Scott Johns and I were going preview card shopping, he pointed out the Volute and I thought, "Cool, sort of a Spellweaver Helix meets Yawgmoth's Agenda dealie." So I took the card home, unwrapped it, read the instruction manual, and then it dawned on me: This thing doesn't have to enchant an instant in your own graveyard! I was just assuming that this was the case, and by doing so I caused myself (and someone else) a lot of embarrassment.

No, the fact of the matter is you can enchant an instant in any graveyard. This card is more like Spellweaver Helix meets Yawgmoth's Agenda meets Shaman's Trance meets Animate Dead meets Abbott & Costello meet the Wolfman. It was quite a meeting, to say the least.

It doesn't take a genius to figure out that Spellweaver Volute is a relative of Spellweaver Helix. I know it doesn't take a genius because I figured it out (the Spellweaver part was a dead giveaway). The Volute probably has a slightly lower power ceiling. You won't be able to pull off any infinite loops with it, since you have to remove the copied instant from the game after playing it. However, it's much easier to set up—all you need is an instant, a graveyard, a deck, and a friend. Mark Gottlieb spent a lot of time working on maximizing Spellweaver Helix, and he pointed out the two basic ways you can use it, both of which apply to Spellweaver Volute:


The Volute has some added utility, in that you can use it to hijack an opponent's deck. Of course, you can never be sure that your opponent will be playing with instants at all, much less a ton of them. As a result, it's much more difficult to build a deck with this as your stated goal. It's the same reason Detritivore is not a very good build-around-me card. Still, both cards are potentially great tools for Spikes.

Since you copy your "grumper-dumped" instants and then remove them from the game, I think you want to play a deck with a lot of instants and as few sorceries as possible. That way, you will minimize your chances of running out of gas. As the FAQ notes, if you run out of instants to enchant, Spellweaver Volute will go to the graveyard the next time state-based effects are checked.

So, how can play with a relatively small amount of sorceries and not run out of them? Simple: Play sorceries that you can recur! Here's just a sampling (the first few have been used to great effect with Spellweaver Helix as well):

When you get something for free, you might as well take the biggest, nastiest, most powerful thing you can. There aren't as many ridiculously powerful instants at super-high mana-costs. However, you can still cheat on the mana costs of some nice bombs, like Inferno or Decree of Savagery. The most obvious instant to copy with Spellweaver Volute has got to be Searing Wind. How would you like to halve your opponent's life total whenever you played, say, a Sleight of Hand?

Here's a deck using many of the easily played sorceries that I mentioned above. You can use Compulsive Research and Careful Consideration to fill up your graveyard with gas while you search for your Spellweaver Volutes. Then, use some combination of Hammer of Bogardan, Petals of Insight, and Beacon of Tomorrows to Searing Wind your opponent into oblivion (which isn't a great place to be, to be honest).

Another high-cost instant that I wanted to use with Spellweaver Volute is Hunting Pack. Since you actually get to play the copied instants, you can use Spellweaver Volute to help you up your storm count. With the tokens from Pulse of the Tangle and Hunting Pack, it shouldn't take much more than a timely Decree of Savagery to end things. Mental Note and Fact or Fiction fill up your graveyard with goodies, while Life from the Loam and the Pulse ensure that you will always be able to play a sorcery.

4 Life from the Loam 4 Pulse of the Tangle

4 Sakura-Tribe Elder 4 Life from the Loam

4 Harrow 4 Pulse of the Tangle

Until next time, have fun enchanting your instants!