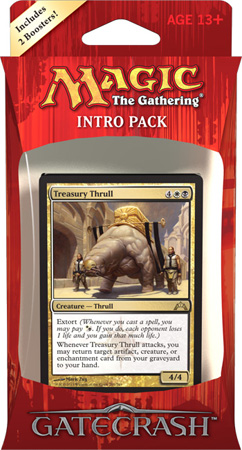 The Orzhov Syndicate's underhanded dealings wear down your opponents, whittling away their life totals until you have it all. Cards with the extort mechanic allow you to pay

whenever you cast a spell to "drain" each opponent for 1 life. Better yet, the ability works in multiples! Get more and more creatures from the "Orzhov Oppression" deck on the battlefield and you can take larger and larger bites out of opposing life totals every time you cast a spell.

For the first few turns of the game, lay the groundwork for massive life total swings later by getting as many creatures with extort onto the battlefield as you can. Don't be afraid to cast creatures as soon as you can instead of waiting a turn hoping to extort. Once you hit the middle of the game, it's time to start extorting! Your opponents may not mind your tariff at first, but as their life totals edge closer to 0, they may quickly find the game slipping away.

You need time to set up your extortion racket, so use your removal spells to fight off creatures that pressure you. Angelic Edict and Murder handles the larger threats, while Blood Reckoning makes attacking you a dicey and dangerous proposition.

If you want to add a big finisher to this deck, consider Sublime Archangel from the Magic 2013 core set. This deadly Angel can fly over opposing defenses to deal massive damage. Another card to find is Obzedat, Ghost Council from the Gatecrash set. The guildmaster of the Orzhov, Obzedat is well-versed in taking an opponent's life and putting it to better use. 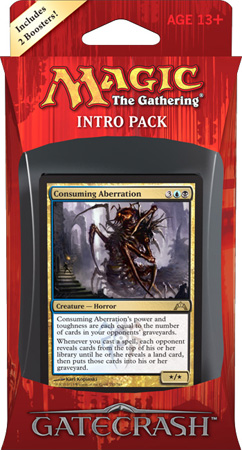 House Dimir values secrecy above all, entrusting only its own agents with valuable codes and information. Whenever you cast a card with cipher, you can exile it, encoding it on a creature you control. Then, whenever the creature slides through and damages a player, you'll get to cast that card again!

House Dimir's knowledge of the undercity can make blocking its attacks nearly impossible. Cards like Deathcult Rogue and Incursion Specialist are experts at navigating directly to your opponent's throat. Set one of them up with a cipher, and you can potentially recast that spell every turn. Send your creature out on a mission to the morgue with Midnight Recovery, returning fallen creatures turn after turn, or perhaps go in for the stealth kill with Shadow Slice. Under such a constant assault, it's only a matter of time until your opponents are overwhelmed.

The "Dimir Dementia" deck benefits greatly from a sparsely populated battlefield. A card like Mutilate from the Magic 2013 core set works wonders, eliminating much of your opponents' planning in just a single spell. Since this deck tends to only have a couple of creatures on the battlefield at a time, you'll be in a better position to recover and take advantage. Also check out Undercity Plague from the Gatecrash set. If you're going to cast the same spell every turn, one that deprives your opponent of life, cards in hand, and permanents is a great way to go! 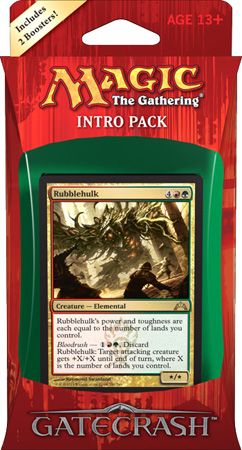 In the Gruul Clans, bigger is better, and with the "Gruul Goliaths" deck, you'll be king of the hill. Gruul creatures crave battle so much, sometimes they don't even wait until they're on the battlefield! The new bloodrush mechanic allows you to discard a creature to pump up an attacking creature. With these creatures essentially joining the fray, you should be able to trump any blockers your opponent can produce. When in doubt, attack!

Cards like Rubblehulk and Zhur-Taa Swine are both big for their cost and have aggressive bloodrush costs to boot. Attack with your small creatures early. If they're blocked, bloodrush can help you smash whatever's in their way. If your opponents aren't blocking much, those creatures can hit the battlefield and keep up the attack. It's a win-win situation.

The huge creatures in this deck put massive pressure on your opponent, especially if you cast them ahead of schedule. Ranger's Path ramps you all the way from four to six mana, meaning you can untap on turn five and cast the mighty 7/6 Ruination Wurm! Arbor Elf and Gruul Keyrune also provide some leaps in mana production.

Large, ruthless creatures are always welcome in a Gruul deck, and Magic offers plenty to choose from. Elderscale Wurm from the Magic 2013 core set is a perfect addition. It's a sturdy 7/7 trampling behemoth that can keep your life total at 7 or more. The soulbond mechanic from the Avacyn Restored set is also definitely worth checking out. Soulbond allows two creatures to pair together, providing a mutual boost to both of them. If large creaturesare good, large creatures working together is even better! 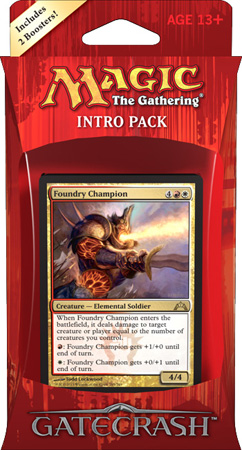 Join the Boros Legion and become part of a unified attack force! The "Boros Battalion" deck hammers that point home by way of the battalion mechanic. Whenever you attack with a creature that has battalion and at least two other creatures, an effect that makes your assault even more powerful happens!

You'll want to speed out of the gates by casting as many creatures as possible during your early turns. Your mission is to control three creatures that can attack, so don't take risks early on. Attack only when the way is clear. Once you have a battalion assembled, use instants and sorceries like Shielded Passage and Aerial Maneuver to ensure you keep enough creatures around to continue the siege.

If your opponent decides to leave an entire bunker's worth of blockers in the way, no problem. Mark for Death limits your opponent's blocking options, and Righteous Charge helps inspire your entire army to rush into the fray and overrun the opponent. Act of Treason lets you borrow an opposing creature—perfect for completing your battalion and leaving the defense lacking.

If you're looking for larger creatures to add to your arsenal, check out Thundermaw Hellkite from the Magic 2013 core set or Hellrider from the Dark Ascension set. They both have haste, so they immediately hit hard, possibly triggering battalion abilities out of nowhere. Increasing Devotion, also from the Dark Ascension set, makes sure your armies are plentiful, giving you five creature tokens the first time around and ten if cast again using flashback! 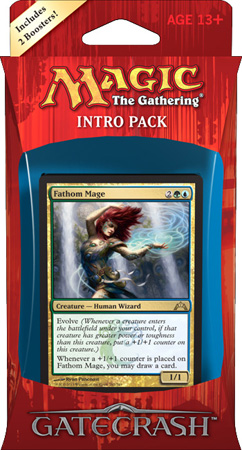 The Simic Combine is always evolving—literally! The evolve mechanic means your creatures are constantly growing into new and unusual forms. A creature with evolve gets a +1/+1 counter if a larger creature (meaning it has a greater power or a greater toughness) enters the battlefield under your control. After enough evolutions, even the smallest creature can sit on top of the food chain.

The "Simic Synthesis" deck takes full advantage of creatures with high power and low toughness, or vice versa. Crocanura and Adaptive Snapjaw grow large quickly because most other creatures in the deck can cause them to evolve. Before you know it, you'll be rolling over your opponent with gigantic creatures.

One of the key spells in this deck is Bioshift. For only

, you can take all of the +1/+1 counters from a single creature and move them elsewhere. Not only can you suddenly make a creature larger in the middle of combat, but you can also use Bioshift to regress one of your evolved creature back to its original state so it can evolve all over again! In conjunction with Sapphire Drake and Crowned Ceratok, Bioshift can also give a creature flying or trample out of nowhere.

If you're looking to kick up the +1/+1 counter theme another notch, take a look at Primordial Hydra from the Magic 2013 core set. This huge Hydra doubles the number of +1/+1 counters on it every turn, giving you plenty of fuel for Bioshift. And don't miss the undying mechanic from the Dark Ascension and Avacyn Restored sets. When these creatures die, they come back with a +1/+1 counter—an upgrade to itself and potentially your creatures with evolve!