Two wizards square off to determine who’s strongest, but as it turns out, their fate is Sealed…

motley crowd of Dominarian riff-raff had gathered in the makeshift arena. It was a shabby, cobbled-together structure with the same rough-around-the-edges feel as the people filling its seats. This fighting arena was run by the magi, a rare sect of battlemages whose purpose was to recreate the glory and grandeur of one-on-one combat—the way it was before war and apocalypse pitted Dominaria's finest warriors and wizards against salt, storm, and starvation. Dominaria was healing—lands were beginning to blossom again, green creeping across their salt-blanched skin. But Dominaria's warriors and mages grew hale as well, with an urge to paint her greening lands red with the glorious brush of battle. 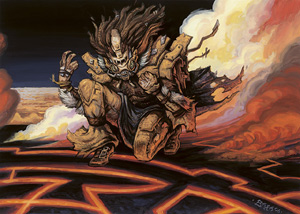 Among the bloodthirsty rabble were two old friends, though neither was yet aware of the other's presence. It had been some years since the two had seen each other, years since each found himself with an unexpected power. Masrath and Tessebik had been accomplished mages since their youth, each with a knack that befuddled their schoolmasters and infuriated the bookworms and grovelers in their class. Their rare skills set them apart from the others, but brought them together immediately. Masrath, the hot-headed, impatient one, had a potent smile and nose for trouble that landed he and the more even-keeled Tessebik in hot water too many times to recount. Tessebik acted as if Masrath was a bad influence, but was quick to take advantage of his friend's ability to find excitement and action seemingly anywhere. "Someone with a cool head has to watch out for you," Tessebik would jest, "or you'll end up toast." Jest or not, Tessebik had bailed Masrath out of trouble many times. But that trouble was always fun.

Their dangerous escapades had almost gotten them thrown out of school. Masrath did not much care for school; he only stuck around to gallivant about slinging spells at monsters with his friend. Tessebik wanted to finish his studies, not convinced that his natural talent was enough to survive on in a world of newly growing threats. Before finishing their final year, something happened to both of them. It coincided with the Mending, the vast interplanar event that sealed the last of the time rifts. The schoolmasters and pupils alike studied the temporal anomalies very closely. When the rifts were closed, they rejoiced outwardly, but lamented privately the loss of such powerful and mysterious subjects. Many classes had to be canceled, experiments abandoned, and books left unfinished due to the loss of the rifts. The school seemed to mourn, except for two prodigal miscreants. 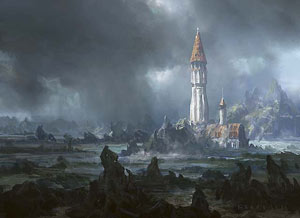 At varying times after the mending, Masrath and Tessebik each gained a sort of seventh sense, a vague awareness of the incomprehensible vastness of the world outside of their own small sphere. Soon Masrath's awareness would grow into an insatiable desire to go, to leave, to fly to who-knows-where and see what it was that called to him so powerfully. Tessebik felt not an urge to travel, but instead an ability to do so. He often said to his friend, "In everything I see a new doorway, but I can't yet see what lies beyond them." Masrath would prod him, "Pick the yellow one, yellow's a happy color!" or "Can you smell what's on the other side? Pick one that smells like good cooking." Tessebik wanted to take his friend's advice, to throw caution to the wind. But it's not something he did alone, and he did not think he could bring his friend through the door with him.

After a few weeks of goading, Masrath could wait no longer. He bade his friend farewell and leapt, somehow, into the great unkown. Tessebik remained at the school to try and learn more about his strange visions. After years of fruitless research Tessebik gave up his search. His desire to know was overpowered by his feeling of loneliness. He could no longer relate to the others at the school. They could not understand his new awareness, nor could they comprehend his altered and expanded magical capacity. He decided to "take the yellow door." 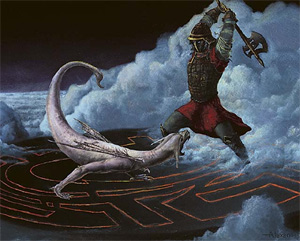 It did not take long for the two planeswalkers to find each other in the crowd. Somehow they just seemed to feel each other's presence. They did not rush to greet each other. Instead, they remained seated and observed, sizing each other up, searching for signs of change. Each had seen and endured much, and each knew that there was a good chance that the other might now be... different. Through the din of combat and the flourish of cheers that followed each landed blow, the two watched each other. Occasionally, Masrath would steal a glance at the combatants in the pit. But it was Tessebik who moved first to approach his old friend.

"You have changed," said Masrath, extending his hand.

"Have I?" asked Tessebik, genuinely curious.

"Since when do you move first?"

With that the two exchanged a hearty embrace and weaved their way out of the hooting crowd.

"That really gets the blood pumping, eh?" said Masrath, motioning toward the arena.

"Come on, old pal! What are you doing here if you're not looking for a little heat?"

The two seemed to walk for days, exchanging stories of the worlds they had seen, the wonders they had assimilated into spells, and the terrible foes they had overcome. Each had seen great nations rise, wars waged, princes crowned, and whole lands changed through blood, battle, and magic. They had served as advisors to kings and as fomenters of rebellion. They had seen and mastered new forms of magic, but neither had found real friendship.

They found themselves searching for others like themselves, others with whom they could share and from whom they could learn. It is what brought them back home Dominaria, the hollow hope in each of finding the other.

And now that they had, the two friends were determined to one-up each other's tales of wizardry and heroism. They laughed and jeered and attempted to impress each other with the spontaneous creation of a Tower of Lead or the summoning of a dragon queen. They magically prepared the finest meals from their favorite destinations, then each insisted vehemently that his fare was superior.

Through all of the boast and flash, each continued sizing up the other. In the end, they decided to "settle it" with a gentlemanly duel of wit and wizardry. What seemed like a simple answer to all the back-and-forth ended up being a back-and-forth all its own. The two discussed at exhaustive length the ground rules of their duel. Each would attempt to strike the other's most impressive forms of magic from the field. Some spells, as they both could tell, would upset the balance of their contest. It was also clear that Masrath had traveled much more than his friend and had an unfair advantage with regard to the range of magic he had access to. The bickering continued until the two of them found themelves laughing at the childishness of it all. 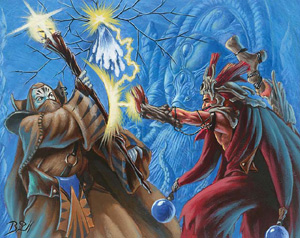 "What are we, twelve-year-olds?" whooped Masrath.

They laughed about the time they decided to race from the school gate to the river, but ended up arguing until sundown over the definition of "river" and "gate" and whether the race was to the river or to the spatial location of where the river was at the start of the race.

"Perhaps we should forget about the duel," suggested Tessebik. "We can just traipse around, slinging spells at monsters like the old days."

Masrath was not quite ready to give up on it. He wanted badly to test his mettle against a worthy opponent, and wanted just as badly to see the mage he knew his friend had become. He was glad to have his partner back, and wanted nothing more than to traipse around slinging spells with him again.

"I believe I have a way we can do both," replied Masrath.

Masrath suggested that the two of them travel to a new plane that neither of them had been to before. They would each spend a few days exploring the lands, assimilating creatures and phenomena into spells, and seeking out new forms of magic native to that plane. Then they'd face off right there, on that plane, to see how sharp each of them had become in the nine years they spent apart.

"Then," added Masrath, "after I have won, we can traipse around the plane together so you can take out your feelings of inadequacy on some of the local bad guys."

"You are as headstrong as ever," replied Tessebik. "But I like the idea. Let us take this door..."

Tessebik motioned to his right then took in a long, exaggerated sniff. "I think I smell some humble pie cooking through there. Come, you look hungry."

Off they went, one following the other's trace through the blind eternities to who-knows-where. They arrived on a sprawling city-plane, in a vast urban wasteland.

And I thought Sealed Deck Week was going to have nothing to do with Magic flavor. Feel free to use the message boards to say who you think won this gentlemen's duel. Also, for the turbo-Vorthoses out there, you can also opine on which colors/guilds each mage might lean toward given his particular character traits.