A look at some great art with a Coalition kicker.

is Kicker Week, and it is only fitting that we pay homage to one of the most potent boots ever to bop a pigskin-Gary Anderson. In the course of his career, he played for 5 teams and kicked more field goals than any other player in history. He's also the only kicker to record a perfect season. If we're going to be talking "kicker," how can we not talk about Gary Anderson?

Actually, it would be easy-because that's not the kind of kicker that interests us here at Taste the Magic (though I will admit, I am a big fan of the "Gridiron"). No, the kicker that interests us is the extra helping of magical "oomph" that mages can infuse into their spells to amp up their power. Now that I think about it, it is quite possible that Gary Anderson is a wizard himself-a pelotamancer, who paid an extra 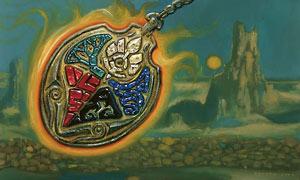 That's right, I am talking about the Coalition. You newcomers may have only seen the tip of that iceberg, Coalition Relic. It's a Future Sight card, a trinket found in the salt-crusted wastes of Dominaria, a symbol of a great war of the past. And so it is into the past that we will be gazing for our Kicker Klatch. There are some kicker cards in Planar Chaos and Future Sight (Ana Battlemage, Citanul Woodreaders, Hunting Wilds, Kavu Primarch, Molten Disaster, Pouncing Wurm, and Ravaging Riftwurm), but they're not the kicker cards we're looking for.

We're looking for the kicker cards for which kicker had a specific meaning. These are the spells from Invasion Block with a special brand of Coalition magic. In a nutshell, the Coalition was a very rare joint effort between members of many factions representing all five colors. It was dogs and cats living together-mass hysteria. But this union of necessity was not borne of peace and friendship. No, the "dogs and cats" had to join forces to fight against the Phyrexian invasion- hence the name of the block, Invasion. 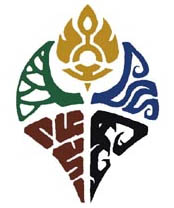 Coalition Relic shows the full symbol of the Coalition, a five-part design with one part representing each color. This symbol represented the dedication to a common cause. In some cases, it conferred magical powers to those who bore it, and in others, it showed up in the magical effects themselves. For members of the Coalition, spells with kicker offered a source of power that the Phyrexians could not access. Creatures, warriors, priests, and mages of one color or another could channel the power of other colors through the different-colored arms of the coalition symbol. For example, a Stormscape Battlemage, a blue wizard, could access white and black magic through the symbols borne on his armor. You can see all of the battlemages' Coalition regalia in this Magic Arcana from way back in '02. The Magic Creative team back then worked hard to show Coalition affiliation on any card with a colored kicker cost (a kicker cost in which at least one mana of a particular color was required.) There were cards with colorless kicker costs that did not show any Coalition symbol. A good example of this would be a card that I illustrated, Canopy Surge.

You can see that, in the original art on the left, the green Coalition symbol was worked into the structure of the vines. At some point, Development cut the

in the kicker cost. That being the case, they decided to treat this spell as if it would not require any extra Coalition mojo. One could argue that a green spell requiring a green kicker would not require any help from the Coalition anyway, but the Creative team made the right move in playing the visual cue out on all the cards involved (with one exception-as far as I can tell, there is no Coalition symbol on Kavu Titan. Vorthos, or even completist Melvins, might wish for the symbol to be present, but the art-lover in me still feels pretty good about this Todd Lockwood gem.) 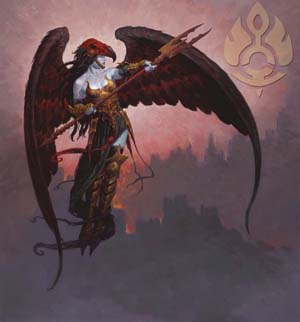 So Wizards cut loose their adobemancers (Photoshop wizards) on Canopy Surge and other cards, to make sure Coalition symbols did not appear on cards without colored Kicker costs. It worked the other way around as well. Cards that did not have kicker when assigned to artists, but did when leaving Development, got the adobemancer touch as well. The good news is that there are many great examples of Coalition symbols being worked organically and masterfully into the art. In such cases I am leaning toward crediting the artists with such deft deployment of Coalition designs, not the Photoshop goblins.

So let's take a look at some of the kicker card illustrations with more skillfully integrated Coalition imagery. Some of these you may have easily spotted on your cards. Others will surprise you, because they are so subtle or small that you need TTM to hook you up with your big art fix.

Dismantling Blow, by Mark Tedin, is a great example of the Coalition symbol appearing as part of the spell's magical effect. You can see the wisps of the blue symbol trailing off near the end of the Blind Seer's staff.

Ron Spencer's Degavolver works in both the black and red symbols. What's cool about this one is that the black symbol, which confers regeneration, is shown over the heart, while the red one, giving first strike, is shown on the gauntlet of the sword arm. Nice.

Dralnu's Pet, by Glen Angus, takes a different tack. In this blue creature illustration, the black symbol is hidden away, Batman-style, as a silhouette in front of the moon. Perhaps the Coalition tapped into Lord Dralnu's black magic by channeling the dark powers of the night, thereby turning the little 2/2 "pet" into a huge, flying, Phyrexian-wrecking machine.

Savage Offensive, by the Brothers Hildebrandt, is one of the examples of Coalition microscopy. At card size, the green symbol looks like a grasshopper clinging to the collar. Here we can see that the three elves all have a nicely rendered green Coalition symbol on the collar and the kavu has one on its wrist. (Hey, are those guys from the Coalition, or the Fellowship?)

Chris Moeller's Illuminate illustration works the same way that the battlemages do-this cat-wizard bears the red and blue Coalition symbols on her clothing, drawing power from them and from her connection to the Coalition

Rakavolver, by Scott Fischer, sports the white and blue symbols on the shield and wings. We can see how the white Coalition magic has empowered the shield with its special "Life Link" ability, and has granted this minotaur-like creature wings.

Skizzik, by Ron Spencer, does a nice job in working the red symbol into the chaotic lightning arcs that form this elemental's "torso." The repetitive design of the red symbol ends up making the body look like an electrical rib cage, from which more electrical appendages sizzle and flail. Apparently, anyone can have an electrical freak-a-zoid monster for a party-crashing, but only the Coalition gets to have one shut the place down.

Orim's Chant, by Kev Walker, does the job by putting the symmetrical white symbol right in the middle of Orim's outfit. Kev made the right move, putting the symbol in the center of an illustration whose power comes from its symmetry.

Anavolver, by Noah Talent-Atall, pulls the same Coalition gag as the other "Volvers." The black symbol is carved into the wooden, regenerative part of the creature's body, while the flight-giving blue symbol is formed in the thin bones of its wing.

Ron Spencer again? I think this makes him the Gary Anderson of Coalition-symbol-depicting artists. Ron's densely detailed style seems to be just what the doctor ordered when it comes to sneaking symbols into the art. Thicket Elemental could be the sneakiest (unless Kavu Titan has sneaked right by me). Even when looking at the enlarged Thicket Elemental, it took me a few moments to find the green symbol. The combination of Spencer's turbo-detail and the elemental's chaotic twist of vines and thorns make it very difficult to find "Waldo." If you look on the left leg (our left), right in the middle of the meaty part, you can see the symbol woven out of the green veiny vines. 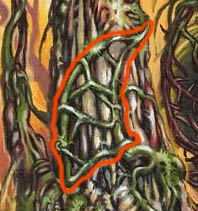 Crack into your old binders and take another look at the kicker cards. There are still some good ones that I did not show here. There are also some dogs. Have some fun trying to figure out which ones are the goblin-jobs. For even more kicker fun, here are the rules to Kick the Can, courtesy of Wikipedia:

Kick the can (a.k.a. "Tip the can") is a game, related to tag, hide and seek, and capture the flag which can be played outdoors by anywhere from three to a few dozen people (kids from about age 7 or older).

In general the game goes something like this: One person (possibly a team of people) is (are) designated as "it" and a can (paint can or metal pail (bucket)) or similar object is placed in the open (usually the middle of a backyard, a green, a cove or cul de sac, parking lot or very lightly traveled street).

The other players run off and hide while the "it" covers his eyes and counts to a previously decided number.

"It" then tries to find and tag each of the players. Any player who is tagged (caught and touched) is sent to the holding pen (jail) which is simply a designated area for all the captured players to congregate, generally in plain sight of the can. Any player who has not been caught can "kick the can" (thus the name of the game). If they can kick the can without being caught then they set all of the captured players free.

If "it" catches all of the players he or she wins that round and generally a new "it" is designated for the next round.

Thus this game is one of skill, strategy and stealth as well as fleetness.