I am a theme deck purist. Today I’ll take a look at what I am sure is the first of many discussions about building a proper theme deck. 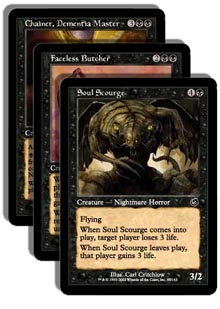 You may have noticed some similarities among the Torment cards unveiled over the past three days. First, they are all black... no bonus points for that one. Second, they are all creatures... ah, getting a little closer. Third, Chainer, Dementia Master is the first “nightmare lord” while Faceless Butcher and Soul Scourge are nightmares (Nightmare Horrors, to be exact).

Those very clever folks in the audience will say “Interesting, all three cards have a word with seven letters in their title, so it must be a bad ‘7’ theme.” Those people already have theme decks down pat, and frankly they’re a little too smart for their own good. For everyone else, the common theme is, of course, nightmares.

I have often invited friends over for “theme parties,” in which we pick a theme ahead of time and all bring our own interpretations in deck form. We usually play a round-robin tournament, though the point is not so much to win the most games as it is to see who has most clearly and creatively built around the theme. In some sense, playing the games is just a way of demonstrating to everyone the hard work you put into building the deck.

Theme decks are an art; They are to Pro Tour decks what poetry is to textbooks. When watching a solid theme deck get played, you should smile at worst and belly laugh at best. This emotional response is the reason to build and play theme decks. Think I’m taking this too far? You, my friend, are not a theme deck purist.

In my theme parties there are four rules:

This last rule looks the most subjective, but I find people quickly can judge the thematic content of a deck. To see what I mean, I’ll look at how I would go about building a nightmare theme deck. 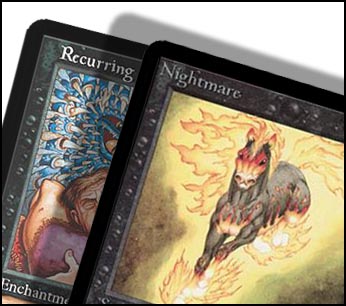 I’ll start out using Chainer, because he is, after all, the nightmare lord.

How many nightmare creatures are there in Magic today? Before Torment, there was only Nightmare. Now there are Faceless Butcher and Soul Scourge. All of these creatures belong in a theme deck dedicated to their creature type. In fact, I will bend the deck to support 4 copies of Nightmare because – geez – its name is the theme.

Recurring Nightmare is the only other Magic card with “Nightmare” in the title*, so it also belongs in the deck. The cool thing is that with Chainer and Recurring Nightmare, the deck is already starting to have a graveyard-animation mechanic to it. This mechanic, in turn, nicely supports Nightmare since normally it would be too expensive to use 4 of in a deck.

FLESHING OUT THE THEME

Here is the part where people get into trouble in their theme deck construction. Now that obvious cards have suggested a graveyard “style” to the deck, many folks will try to look for cards that don’t quite fit the theme but are very cool to use with Chainer and Recurring Nightmare. Don’t use Unnatural Selection. Don’t use Entomb. Don’t use Verdant Force. These are not theme cards.

Instead, it is now time to open your card collection (or even better, load up Magic Encyclopedia, Apprentice, or soon Magic Online) and search for all cards that fit the theme. Usually I will take the time to search through every card in every color. Because of Chainer’s activation cost and Nightmare’s dependence on Swamps, however, I’ll limit my search to just black, artifact and land cards.

First search the card titles, types, and abilities. These are the attributes that will most tightly tie a theme deck together. Then check out art and flavor text.

Here the judgment calls begin. Does Underworld Dreams fit the theme? What about Face of Fear? The Nightstalkers? For now, I include every card that is borderline into my list, using extremely iffy cards as little as possible. The important part is that – in the end – these are the only cards I will use for deck construction.

It sounds crazy, but you would be surprised how easy (and fun) it is to vastly limit your card choices and still make a deck playable. By starting with only the cards that fit your theme, you are guaranteed to have a thematic deck at the end and you won’t be tempted to dip into non-theme cards just because they make the deck more powerful.

It is clear in scanning the nightmare-esque cards printed so far that a lot of them are creature type horror. Horrors, it turns out, have really spooky creepy-crawly names/pictures that are reminiscent of nightmares. There are so many horrors, in fact, that I’ll start with non-horror cards first and fill holes later. I don’t want the deck to appear to be a horror deck, which feels like a dangerous possibility.

The most playable non-horror cards seem to be Terror, Spirit of the Night, Wall of Distortion, and Altar of Dementia. Terror is just an all-around good card, both generally and thematically. Spirit of the Night works great with the graveyard-animation mechanic the initial cards established. Wall of Distortion gets opponents’ cards into the graveyard and has great flavor text (“It reflects only nightmares.”). Altar of Dementia is, quite frankly, a borderline card that happens to work very well with Chainer (allowing you to both sacrifice creatures before they are removed from the game and put more potential creatures in the graveyard for Chainer to animate).

I want to use Fevered Convulsions and Dread of Night, but neither seems to fit what I’m trying to do. Looming Shade and Dungeon Shade both have good flavor texts for a nightmare deck, but including them starts to make me think too hard about the theme just by looking at the decklist. Dumb reason? Maybe, but I also need a reason to winnow cards.

When the dust settles, only two horrors make the cut. Hidden Horror has that under-the-bed feel to it, and works great with getting a fattie into the graveyard to animate. Phyrexian Gargantua, meanwhile, has good enough flavor text to warrant a single copy. I desperately wanted to use Childhood Horror, but I didn’t think a threshold card made sense in the deck.

1 Spirit of the Night
35 Cards

Think you can do better? Throw a “Nightmare” theme party after the release of Torment and see what you and your friends can conjure up. Here’s a hint, though: Don’t use Terror or Fear, since most of the critters will be black.

Next week I’ll have more fun with graveyard animation. See you then!

2 Feast of the Unicorn

*: Except, of course, the ultimate nightmare that is not only the wrong color for this deck but is also too, pardon the expression, nightmarish to use. A braver soul than I might try to work this card into the deck too.