tandard right now is a busy format. With Regionals, Pro Tour Qualifiers, Grand Prix–Barcelona, and Grand Prix–Seattle/Tacoma, everyone is looking for the hot tech. A lot of people seem to be finding it too. From Regionals, the big story was Black-White Tokens. The Fog deck attracted some attention, before Grand Prix–Barcelona fully thrust Cascade Swans on the world's attention. Since then Faeries have resurfaced, and Five-Colour Blood, the cascade aggro deck of choice has flourished into a formidable foe. Meanwhile, Bant Aggro is casting Shorecrasher Mimic and Cephalid Constable now.

Where does this leave those looking to do something fresh and new in the format? There's an argument to say that everyone is being fresher and newer than ever before anyway. Are all the good decks taken? No. The challenge to the rogue deck-builder now is a tough one, though. As is typical of a format full of cards at the end of a block, decks right now are powerful. If we're building something new, we need to find something powerful to compete. 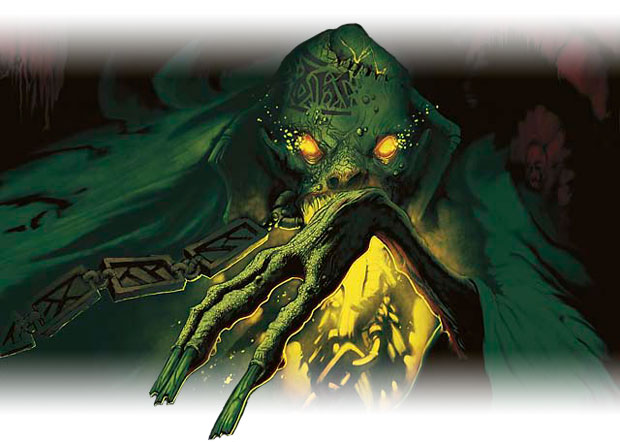 One card that stuck out for me upon checking out Alara Reborn was Anathemancer. This is a guy who can really stick it to decks that are (rightly) trying to make the most of a format that has a lot of rewards for multicolour decks. It really has never been easier to make decks that play a lot of colours, and this Zombie Wizard seemed like the perfect answer.

Now, it is straightforward enough to drop Anathemancer into a red-black aggro deck, but in a format where everyone else is getting a lot of card advantage through cascade and creatures that bring a lot of friends with them, I was concerned that regular red-black aggro might be a little underpowered, and could run out of gas against much of the opposition. Having watched red-black decks in Barcelona, I felt this lack of staying power would be hard work. Also, I really wanted to get maximum value out of those 'mancers. In search of greater power, I went with the following build, which gets to play the grim fandango quite a bit more.


This deck has a lot of ways of getting card advantage, be it Wort, the Raidmother; Profane Command; Siege-Gang Commander; or Makeshift Mannequin. With Death Baron in the mix, those Anathemancers get all the scarier, being able to trade with pretty much everything. Even scarier, Deathbringer Thoctar turns into something of a machine gun when given the power of deathtouch. While sometimes this deck will just beat down, if it does get bogged down, it has the kind of reach to dig right back out again. Just an end-of-turn Makeshift Mannequin on Wort can allow for some impressive rebuilding if that first wave gets held off.

Those Tarfires in the deck have actually proven surprisingly productive. While originally they were Nameless Inversion (for similar synergy with Wort, the Raidmother), being able to off a large proportion of the threats in the format for just a single mana proved more efficient, and allowed for the long game of going to the dome, which is backed up by Profane Command and Anathemancer.

In terms of Anathemancer's power, by playing the slightly longer game, Dead Again gets a little more value than most straight red-black decks. It's able to wait a little longer to cast the Wizard, and then able to get it back more than just once thanks to Makeshift Mannequin. I had a pretty exciting game in testing where a single Anathemancer in the graveyard took out an opponent from 14, as it came into play at end of turn thanks to Makeshift Mannequin, got killed off by my own Mogg Fanatic, and then unearthed to hit my opponent for 7 a second time. That will show those players with complicated mana bases!

My second deck for today doesn't get hit by Anathemancer whatsoever, but that is not the main reason I'd play it. It is simply one of the most fun decks to play that I have built in ages. On the brew for some time, this Esper deck really kicked into gear with the introduction of Alara Reborn and the borderpost cycle.

This is the deck that I find that I play in the tournament practice room on Magic Online Tournament Practice room more than just about any other at the moment. When it is working at its best, it feels like an Extended deck—clearly a good sign in the current Standard environment.


Yes, 11 lands, in a format where other decks are playing 41. This is a deck that just explodes, though, and it has sufficient card drawing to be able to handle having such an insanely low land count. Here Borderposts are actual threats, making Master of Etherium that much bigger, pumping up Glassdust Hulk and Glaze Fiend, and increasing the artifact count to allow for dizzyingly quick Salvage Titan plays.

Etherium Sculptor shines like never before when given some Borderposts to play with, as its ability also reduces the alternate cost of these mana artifacts, frequently allowing the Borderposts to net you mana on turns where they are played by letting you tap the same basic land twice.

The maindeck of this deck is really intending to punish decks with slow draws, or that are light on flyers (which seems to be much of the non-Faerie field). It makes little concession to the field, as it seems that the goldfish-testing speed of the deck is often enough to win things before other decks have really found their feet.

Sculpting Steel is an interesting inclusion in this deck that fills in whatever hole you are missing. More often than not, it will become a second copy of the very best threat that you have in play, but there are definitely occasions where doubling up on Etherium Sculptors allows for some pretty silly turns. Once the Sculpting Steel is in play, though, that isn't to say that it has to remain moulded into one form never to change. With Esperzoa, there is ample potential to upgrade your Steel later in the game, as your priorities change.

This is a deck that has powerful starts and looks to end the game around the time that many others are just getting into gear. I would thoroughly recommend giving it a go—it has produced more than a few surprises for unwary opponents thus far for me.

Finally for this installment, I have a deck that was originally designed by a friend of mine at my local store, Eclectic Games. Cyrus Bales is one of the rogue deck-builders locally who impresses me the most with his constant stream of innovative takes on the metagame. Cyrus was the first person I saw playing with Sanity Grinding, and indeed the first person I saw winning with it. Eclectic would certainly be a word I'd use to describe his deck-building style, and my final deck for the day is my take on a doozy that he came up with just a little before Japan started making waves by casting Fog effects a lot. Check it out.

2 Font of Mythos 4 Howling Mine


This deck is, after a fashion, the Fog deck. While it can deck players, though, this is not its intention. This is a deck which is looking to win through damage (though admittedly not through the combat step). With a similar Howling Mine engine, Cyrus's deck looks to make full use of Underworld Dreams and Spiteful Visions to end the game fast. Its Fog effects do not need to create a hard lock on the game—all they are intended to do is to buy sufficient time to be able to finish the game with damage. There are sufficient Fog effects to force opponents to commit substantial numbers to the board, but there are equally enough Wrath of God effects in this version of the Fog deck to be able to punish such play without needing to stop every single attack step. Here, Batwing Brume also functions as a damage spell, edging another step closer to victory.

The attraction of a deck like this in the metagame is much like that of the Fog deck, inasmuch as it attacks opponents along a line that they are not ready to defend. I played a strange game with this deck in which my opponent played Phosphorescent Feast to gain something in the region of 40 life, but the attack plan of this deck remained solid. Casting Incendiary Command as a small Lava Axe-plus-Winds of Change is enough to deal a truly colossal amount of damage with a couple of copies of Underworld Dreams in play.

The other element of this deck that excites me is the fact that it is wholly creatureless—but has some excellent creature options out of the sideboard—in order to keep opponents guessing about what to do with their creature removal spells. Anathemancer is again a star player, as he gets to bite big chunks out of opponents when the game has run long. Kederekt Parasite also makes an appearance, playing nice with Spiteful Visions in matchups where the deck's win condition needs to be backed up a little bit. Finally, big Demigod of Revenge is potentially a scary individual for control decks to deal with when they have decided that creature removal isn't the way for them. In this way the deck is rather reminiscent of the Heartbeat of Spring decks of old, which had a perfectly serviceable "big hasty monster" plan that kept opponents honest against one of the less honest decks in the format.

Right now we find ourselves in a Standard format where if your deck could realistically be described as 'standard' in its operations, then it is probably not good enough. Whether you are making Quillspike very large with Devoted Druid (and eating the odd persist counter along the way), or casting Dramatic Entrance to get Progenitus into play at end of turn, now is the time for the big plays. Just make sure that your opponent can't see them coming!

Have fun and be lucky!