From the Grave Risen

Hello everyone, and welcome to the inaugural column of Uncommon Knowledge on MagicTheGathering.com! For those who don't know me, my name is Ben Bleiweiss. I'm a former Pro Tour regular, with my top finish being 24th place at Pro Tour - Mainz. Also, I have worked as a store manager for Neutral Ground, a head judge for Gray Matter Tournaments, and an Internet columnist for the Dojo way back in the day. That makes me pretty old school -- I started playing around the time of Revised, and haven't ever really stopped since. So when Mark Rosewater approached me during Pro Tour - New Orleans to write a Magic: The Gathering history column for this new website, I jumped on the opportunity immediately. As I recall, the exchange went a little like this:

Mark: Ben, I need to talk to you sometime during the tournament; make sure you see me.
Me (aside, to a friend): Oh, man, he's finally gotten me banned from the DCI for heckling him during his trivia show six years running!

Mark (later): Ben, we're starting a new website about Magic: The Gathering, and we'd like you to write our Magic history column.
Me: How much do I have to pay you?
Mark: Actually, we'll be paying you.
Me (pen in hand): Where do I sign?

And let me tell you, I'm thrilled to have the game’s history as the focus of my articles. Magic has evolved a great deal since its initial release, with the colors developing different themes, new abilities being infused into the game, and even the physical look of the cards changing every so often. For instance, the ideas of color-coding expansion symbols for rarity (black for common, silver for uncommon, and gold for rare) and adding set collector numbers (the numbers on the bottom center of the card that tell you how many cards are in the set) have only been around since the Exodus card set! For years, people had to find outside sources in order to know the rarities of each card, or if they had a complete set. Now this information is self-contained on each spell.

The most recent cosmetic change to Magic cards came with the previous set, Odyssey. You may have noticed that on the upper left-hand corner of your cards with the flashback ability there is a little tombstone. But what you may not know is that this symbol does not necessarily signify only flashback. Instead, it is a new designator that Wizards of the Coast is currently using to indicate a card that is playable out of the graveyard! Throughout Magic history there have been only a handful of spells and creatures which have had this extraordinarily powerful ability, and Torment will add a new creature to this elite pool: Ichorid.

Ichorid appears at first to be similar to Ashen Ghoul, but in fact it has a much different application. While they are both 3/1 black haste creatures for

that can return from the graveyard, Ichorid returns at no mana cost. It will return to play more readily (it is easier to have one creature in your graveyard than three), and is much more aggressive than its cousin from Ice Age.

The first card that would have been printed with the tombstone symbol is Alpha’s Nether Shadow, starting one half of a tradition for cards with that trait: Black was granted the ability to have creatures which can be re-used from the graveyard. This ability was not revisited until Ice Age, with the aforementioned Ashen Ghoul. However, one other card in Ice Age stands out as a testament of just exactly how powerful self-recurring spells can be: Whiteout.

Whiteout looks innocent enough at first. It has a marginal effect (the “removes flying” part), and can only be returned with snow-covered lands. However, the card saw tournament play when it was first printed.

At the time, “Necro” decks were defining the early Type 2 tournament scene. They used Hypnotic Specter, Order of the Ebon Hand, and Sengir Vampire as shock troops, combined with Strip Mine and Hymn to Tourach to disrupt opponents’ land and hand, and Necropotence to exchange life for more cards. One of the foil decks developed to defeat that design was a red/green Stormbind deck, which used creatures such as Whirling Dervish to plow through black’s defenses, and capitalized on Stormbind's ability to kill virtually any of the opponent’s creatures for a small cost. The card that put this deck over the top was Whiteout, for three reasons: 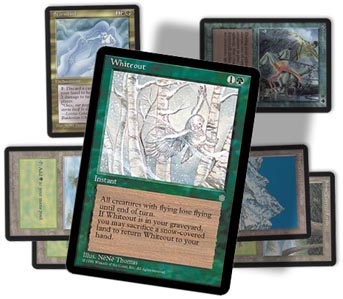 Trust me; I’ve seen tournament matches decided in that fashion.

That's how powerful these self-recursive cards are. Even the most innocent looking ones are capable of winning games almost single-handedly.

Alliances introduced Krovikan Horror and Death Spark to the mix. Death Spark began the second half of the tombstone theme: Red is the color that can recur direct damage spells from the graveyard. And this trend would be no more apparent than in the following set, Mirage, which debuted what was arguably the most powerful self-recurring card ever printed, Hammer of Bogardan. While the tombstone ability was viewed as more of a novelty in the past (Buried Alive hadn't been printed yet, which would be the card to make Ashen Ghoul/Nether Shadow/Krovikan Horror a workable engine), absolutely no one could deny the power of a reusable 3 points of damage per turn. Entire decks were built around it (red/blue decks became known as Counter-Hammer), and the Hammer dominated the limited format, if you were fortunate enough to open one (or unfortunate enough to have to play against one).

The next set, Visions, gave black the largest creature it has to date that can recur itself: Necrosavant. While easily the most restrictive recurring card ever (

plus sacrifice a creature in play to recur him, and only during your upkeep), the ability was well worth it as this creature could "trade-up" from a less-powerful creature to wreck havoc as a monstrous 5/5 that would never go away! On the other end of the spectrum, Tempest gave us Carrionette, a 1/1 with virtually no impact on the game -- while on the table, that is. Once it reached the graveyard, it became a unique entity in all of Magic: The Gathering -- a creature/spell that could affect the game directly from the graveyard! At the time, there was no other card in Magic that could duplicate its ability to kill a creature from beyond.

Stronghold brought us the second of three self-recurring cards that were the focus of entire decks: Shard Phoenix. This 2/2 flyer fueled an engine of near-infinite “counterspelling” when combined with Forbid, and also had the power to clear the board of any small non-flying creatures, ensuring almost total control over the game. And unlike previous creatures of this nature, the Phoenix could send itself to the graveyard at any time, avoiding most remove-from-game effects like Disintegrate or Swords to Plowshares (which had been the bane of recurring creatures past).

Mercadian Masques finished the triumvirate of tombstone-deck built cards with Nether Spirit. Multiple strategies were formulated around solely this card, including a mana-lock with Contamination, a black/blue control deck, and an Obliterate deck. Also appearing in Masques was the first legend that both you and your opponent could play with at the same time. I'm referring to Squee, Goblin Nabob. Sure, you couldn't have two of him in play at the same time, but more often than not he filled the role that Whiteout had in the past: a resource that you could use repeatedly outside of the actual “in-play” zone. Squee became a quick favorite to pitch to Survival of the Fittest, allowing you to search your deck for a creature per turn for only

. Prophecy introduced Coffin Puppets, which had probably the least restrictive return-directly-to-play ability of any black creature before Ichorid (sacrificing two lands is much easier than setting up your graveyard to have three creature cards above Nether Shadow).

The last card that could be retrofitted with the tombstone symbol is Pyre Zombie. This gold Invasion rare combines the black theme of recurring creatures and the red theme of recurring damage spells. You may note that Shard Phoenix and Squee were both creatures, but there is a subtle difference here. The black recurring spells are almost all creatures that want to enter play and beat your opponent's life total to zero through attacking; the red recurring spells are designed more to control the board and effect the game outside the “in-play” zones, such as keeping cards in your hand as a resource (the Phoenix and Squee), or clear the board of creature threats, repeatedly (the Hammer, the Phoenix, and the Spark). Pyre Zombie combines these themes into one neat package -- you can use it as a card-in-hand resource, you can beat down with it, or you can use it to control creatures on the board.

THE PRESENT: FLASHBACK AND BEYOND

This brings us back to Odyssey. With the advent of flashback cards, every color in Magic now has spells that can be played straight from the graveyard. Although none of these are constantly reusable, they bring a powerful aspect to the game by allowing a double-threat out of each spell.

So it looks like we have a new permanent symbol to add to the Magic universe (the tombstone) that signifies a very powerful ability -- each card listed above has been used in a serious, competitive tournament deck at some point. Think about this for a second: How many other abilities in all of Magic: The Gathering have a 100% retention rate for tournament playability? Every single card with the ability to self-recur from the graveyard has been a winner so far. Think about that when you start building new decks with Ichorid, the latest heir to this grand line of spells!