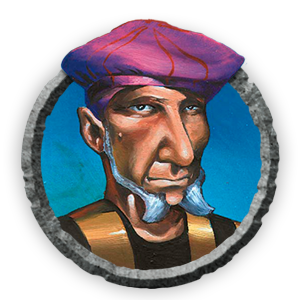 Log Line:
Natives drive out prisoners as they overwhelm the guards in a forsaken subterranean prison.

CB02
Scintilla Farmer
[Unnamed Scintilla Collector Variant - http://community.wizards.com/magicthegathering/wiki/Labs:Gds/gds2/svanes...
B
Creature - Elf Shaman
0/0
CARDNAME enters the battlefield with one +1/+1 counter on it.
Remove a counter from CARDNAME: add B to your mana pool.
Watermark: Native

CB03
Neophyte Assassin
1B
Creature - Human Assassin
1/1
When CARDNAME is put into a graveyard from the battlefield, target player sacrifices a creature.
Watermark: Prisoner

CB08
Mold Creeper
[Mold Creeper - http://community.wizards.com/magicthegathering/wiki/Labs:Gds/gds2/svanes...
3B
Creature - Fungus
2/2
Compost - Whenever a non-token creature you control is put in a graveyard from the battlefield, put a +1/+1 counter on CARDNAME.
B, Remove a counter from CARDNAME: Regenerate CARDNAME.
Watermark: Native

CB10
Contaminated Puma
5B
Creature - Cat
3/4
Countercast - Each counter you remove from a permanent you control while casting this spell reduces its cost by 2.
Deathtouch
Watermark: Native

CB11
Final Haunting
[Weaken with Souls - http://community.wizards.com/magicthegathering/wiki/Labs:Gds/gds2/svanes...
B
Sorcery
As an additional cost to play CARDNAME, exile a creature card in your graveyard.
Target creature gets -X/-X until end of turn where X is the exiled card's power.
Watermark: Native

CB12
Bribe the Guards
1B
Sorcery
Put a +1/+1 counter on up to two creatures, then tap those creatures.
Watermark: Prisoner

CB13
Drain the Land
1B
Enchantment - Aura
Enchant Land an opponent controls
Enchanted Land is a Swamp.
Whenever enchanted land is tapped, put a +1/+1 counter on a creature you control
Watermark: Native

CB14
Insatiable Rot
[Noxious Shroomguy - http://community.wizards.com/magicthegathering/wiki/Labs:Gds/gds2/svanes...
1B
Enchantment
Compost - Whenever a non-token creature you control is put into a graveyard from the battlefield, target player loses 1 life and you gain 1 life.
Watermark: Native

CB15
Bonds of Reprisal
2B
Enchantment - Aura
Enchant Creature
Whenever enchanted creature attacks or blocks, it deals damage equal to its power to its controller.
Watermark: Watcher

CB16
Grand Larceny
2B
Instant
Move up to two counters from target permanent to another permanent of the same type.
Watermark: Prisoner

CB18
Fungal Rebirth
3B
Sorcery
Countercast - Each counter you remove from a permanent you control while casting this spell reduces its cost by 2.
Return up to two target creature cards from your graveyard to your hand.
Watermark: Native

Comments
Per the judge comments, I removed Grift and Recycle from the set. I re-concepted +1/+1 counters as concentrated mana crystals (scintillae) that Natives create through composting and other methods and then consume for mana or utility effects. Prisoners mainly steal and trade counters and use them for their pump effect. Watchers will interact with them in a different way. Rage seemed the most liked mechanic so I focused on Black, which will define much of the rest of the set.

I went with a little less stealing and a little more killing, but the stealing feel is important so I made it less parasitic. Most counter theft abilities always give you a counter and then let you remove one if available. The exception is Grand Larceny, which is a Fate Transfer variant (the proportion of relevant counter generating cards at Common Black is the same as in Shadowmoor)

I kept the number of compost cards low (~5 at common between green and black) and they only see your creatures to minimize board complexity and number of triggers.

Countercast was created as a limited smoothing mechanic, but became quite popular in playtest. There's a nice interaction where you countercast out a big creature, killing your scintilla creature and triggering compost.

Both watcher cards use your opponents cards against them or for you.

Big Bully was changed from a saboteur trigger to an attack trigger so you could get more uses out of it before your opponent dies.