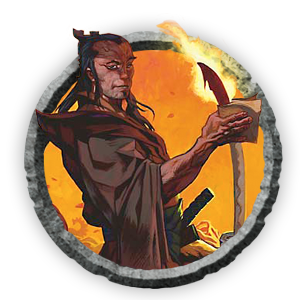 Disparate factions struggle to survive in a wild frontier filled with outlaws, violence, and death

CR1
Howling Coyote
R
Creature- Coyote
1/1
Reveal a card from your hand: If the card you revealed is red, target creature can't block this turn.

CR3
Spellslinger Outlaw
[Duelist- http://community.wizards.com/magicthegathering/wiki/First_Challenge]
1R
Creature-Human Rogue
1/1
When Spellslinger Outlaw enters the battlefield, have a showdown with target creature's controller or target opponent. If you win, Spellslinger Outlaw deals 2 damage to that creature or player. (Each player in the showdown draws a card. Then each of those players simultaneously discards a card from his or her hand. A player wins if the card he or she discarded had a higher converted mana cost.)

CR5
Loose Steer
[http://community.wizards.com/magicthegathering/wiki/First_Challenge]
2R
Creature- Aurochs
3/2
Loose Steer must attack each turn if able.
Whenever Loose Steers attacks, it gets +1/+0 unitl end of turn for each other attacking Aurochs.

CR6
Viashino War Priest 1rr
1rr
Creature- Viashino Shaman
2/2
Trample
When Sand Tribe War Priest enters the battlefield, have a showdown with target opponent. If you win, Sand Tribe War Priest gets +3/+0 and gains haste until end of turn. (Each player in the showdown draws a card. Then each of those players simultaneously discards a card from his or her hand. A player wins if the card he or she discarded had a higher converted mana cost.)

CR7
Sandtribe Raiders
[Waste Scavengers- http://community.wizards.com/magicthegathering/wiki/Your_Cards]
3r
Creature- Viashino Warrior
Retaliate- At the beginning of each player's end step, if a creature you control was destroyed this turn, put a 1/1 red Viashino Warrior creature token onto the battlefield.

CR8
Swooping Thunderbird
3rr
Creature- Elemental Bird
4/1
Haste, Flying
Revelation- Whenever Swooping Thunderbird is revealed from your hand by a spell or ability, you may pay R. If you do, target creature you control has gains haste until end of turn.

CR14
Viashino War Cry
1R
Instant
Target attacking creature gets +2/+0 until end of turn. Have a showdown with the defending player. If you win, that creature gains intimidate until end of turn. (Each player in the showdown draws a card. Then each of those players simultaneously discards a card from his or her hand. A player wins if the card he or she discarded had a higher converted mana cost.)

CR16
Fiery Totem
3R
Sorcery
You may reveal a red card from your hand. If you do, put an X/1 red Elemental creature token with haste onto the battlefield, where X is the converted mana cost of the spell you revealed this way. Exile it at the beginning of the next end step.

I chose red for this challenge because I felt that it had the greatest connection to Deadsands and its mechanics.

In regards to those mechanics, I choose Revelation over Hold Out as it has more design space, is more likely to yield a benefit to the player, and is more Timmy-friendly. I retooled Showdown to reveal less information and still be nonrandom. The discard was added in so that one player couldn't win every showdown by holding onto one big spell. The draw precedes the discard so that players with empty hands won't automatically lose...and then draw a card. Sadly, it no longer triggers Revelation, but I feel its an acceptable loss. I unkeyworded spellslinging since it the timing and frequency of the reveal varies dramatically between cards. I decided to stick to revealing cards of the same color, as my set does not have a multicolor theme. I tried using other card properties, but most of them proved too restrictive in terms of building a deck.

As for my commons, I utilized as many Western tropes as I could. I also made sure that there were multiple ways to cheaply reveal cards at common and that all of my mechanics were well represented.

Random notes:
-Viashino are combat focused, while the bandits are focused on noncombat damage
-Don't worry. Auroch's are not a major part of the set. I wanted a Magic creature type that represented cows/buffalos and they fit the bill quite well.