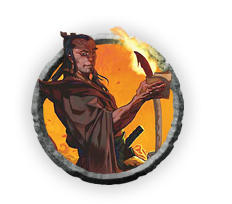 On the lawless frontier, death can come in a flash.

CG05
Elusive Najash
1GG
Creature- Snake Warrior
3/2
Whenever you cast an instant or a spell with flash, Elusive Najash gains shroud until end of turn.

CG07
Hunted Aurochs
[Hunted Aurochs- http://community.wizards.com/magicthegathering/wiki/Guns_for_Hire-_Chall...
3G
Creature- Aurochs
3/2
Whenever Hunted Aurochs attacks, it gets +1/+0 until end of turn for each other attacking Aurochs.
When Hunted Aurochs is put into a graveryard from the battlefield, you gain 2 life.

CG10
Sandtiller Wurm
4GG
Creature- Wurm
4/4
Trample
Whenever you cast an instant or a spell with flash, Sandtiller Wurm gets +2/+2 until end of turn.

CG13
Smoke Signals
[http://community.wizards.com/magicthegathering/wiki/Guns_for_Hire-_Chall...
G
Instant
Prevent all combat damage that would be dealt by creatures with flying this turn.

CG14
Wild Fury
G
Instant
Until end of turn, target creature gets +2/+2 for each instant you cast this turn.

CG15
Track Down
[Sunrise Duel-
http://community.wizards.com/magicthegathering/wiki/Guns_for_Hire-_Chall...
1g
Sorcery
Choose target creature you control and target creature an opponent controls. Each of those creatures deals damage equal to its power to the other.

CG17
Stake a Claim
2G
Sorcery
Search your library for a basic land card and put that card onto the battlefield tapped. Then shuffle your library.
Draw a card and then discard a card.

I made a major change to my theme this week by choosing to focus on instants and spells with flash. My old mechanics started as an attempt to convey surprise and speed, but it has become clear to me that they were no fulfilling that role adequately. I think the new theme should be more fun to play and will truly do this setting justice.

Green is represented on Deadsands by settlers, hunters, trappers, and frontiersman. Green is also represented by the Najash, a reclusive tribe of snake people that is focused on stopping the technological and industrial expansion of the frontier.

Showdown was left out of this submission because it still needs more work and I'm not sure if it belongs at common. My last attempt at the mechanic was "Showdown- If you cast the most spells this turn, GREATER EFFECT". This version was designed to go with the new theme.