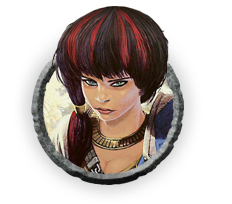 A peaceful world marches to war.

CW01 - Forward Scout
[Plowman to Swordsman by NMEL - http://community.wizards.com/magicthegathering/wiki/labs:Gds/gds2/utopia...
W
Creature - Human Scout
1/1
Mobilize - Whenever another creature enters the battlefield under your control, Forward Scout gets +1/+1 until end of turn.

CW13 - Village Congregation
[United in Focus by Will Blanks - http://community.wizards.com/magicthegathering/wiki/labs:Gds/gds2/utopia...
1W
Sorcery
Gain 2 life for each creature you control.

CW14 - Idealized Purpose
1W
Enchantment - Aura
Enchant Creature
Enchanted Creature has lifelink.
Mobilize - Whenever another creature enters the battlefield under your control, enchanted creature gets +1/+1 until end of turn.

CW15 - Improvised Shield
1W
Instant
Prevent all damage that would be dealt to target creature this turn.
Draw a card.

Comments:
For this round, I wanted to use two mechanics: One to represent white's role in Utopia, and one that could be used across colors and added to the set's identity as a whole.

Mandate (originally named "Plurality") is a bizarrely literal way of representing democracy, but I enjoyed the flavor and gameplay. When you're playing against other creature-based decks, it creates a very interesting struggle for a majority presence on the battlefield.

I originally wanted a mechanic to capture the "adaptation" theme I was going for, but this proved somewhat untenable at common. Flip cards, modified levelers, and other text heavy monstrosities added more complexity than they were worth. Eventually, I decided to leave the adaptation theme to higher rarities and invent something I could use at common with interesting connections to all colors.

I settled on Mobilization (originally suggested as "Creaturefall" by unbroken circle) as something that instead captured the "marching to war," feel of the set, creatures that work as more of their allies enter the fray. One of the primary reasons behind the decision is that it has interesting interactions with each color - merceries in black, fire tokens in read, weenie armies in white, flash creatures in blue, and hulking monsters in green.

Thanks again to everyone who helped me out on this challenge!