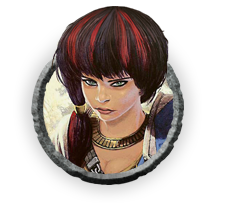 Lower-City Courier (Common)
2B
Creature - Human Mercenary
1/1
Intimidate
Hireling (This creature enters the battlefield with a +1/+1 counter for each gold counter spent to cast it.)

Garden Guard (Common)
1G
Creature - Elf Mercenary
2/2
Hireling (This creature enters the battlefield with a +1/+1 counter for each gold counter spent to cast it.)

Lotus Garden (Common)
1G
Enchantment - Aura
Enchant Land
Enchanted land has "T: Add one mana of any color to your mana pool and gain one gold counter." (Gold counters can be spent as colorless mana or life payments.)

I've concluded that "a peaceful world converting tools into weapons" is a good thematic concept for Utopia in the same way that "a world where destructive natural forces have made civilization impossible" was a good concept for Zendikar. But Zendikar wasn't sold on its complex societal ideas - it was advertised as "Adventure World."

I needed a simple, resonant, saleable theme for Utopia to complement its more complicated ideas. My answer was to make Utopia the "City Set." Ravnica used a city as its flavor backdrop, but it was too full of multicolor and guild themes to represent the idea of a "City World" in gameplay.

There are a number of ways this could be represented, but I chose to focus on expanding and refining my "gold counter" mechanic from previous challenges. It's been a popular mechanic with the public and really embodies the urban theme I'm going for.

Hireling came from a desire to represent the "hiring mercenaries with money" concept while avoiding the pitfalls of repeated shuffle effects and bad associations. Hireling and the other "spend gold counter" abilities are somewhat parasitic, but Gold counters themselves are so open-ended that I'm willing to make some cards that require them.

Thanks again to all the friends, family, and anonymous contributors who have helped and supported me through the Great Designer Search 2.