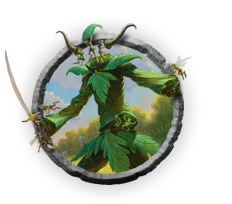 Deep underground a new form of magic threatens to extinguish the light.

Art: A pale gray horror emerging from a large dark crack in the ground.

Art: A bright multicolored elemental flying near a cave ceiling.

Art: An elf with pale skin drawing dark energy from the ground.

Art: A green beast, we see the impact of its back into the cave ceiling.

5) Common Card #5 –
Zyx Scorpion
[Gloom Lurker http://community.wizards.com/magicthegathering/wiki/Labs_talk:Gds/gds2/l...
@
Cretaure – Horror
1/1
(@ can only be paid with colorless mana.)
Deathtouch
Morph B (You may play this face down as a 2/2 creature for 3. Turn it face up any time for its morph cost.)

Art: The defining features of a scorpion (pinchers, tail) can be seen in the darkness.

8) Common Card #8 –
Pilgrim's Eye
[Reprint – Worldwake]
3
Artifact Creature – Thopter
1/1
Flying
When Pilgrim's Eye enters the battlefield, you may search your library for a basic land card, reveal it, put it into your hand, then shuffle your library.

Art: A thopter hanging upside-down from a cave ceiling.

Art: A vampire tending to a bloody wound on an unknown pale creature.

10) Premium Mythic Card –
Liliana Released
5 (cost)
Planeswalker – Liliana
4
+2: During target player's next turn, that player can't attack with more than one creature or cast more than one spell.
-2: Each player sacrifices a colored permanent.
-9: Target opponent gains an emblem with "At the end of your turn, you lose half your life, rounded up."

Art: Liliana, shrouded in darkness, defined by the glowing purple lines on her body.

Art: A flaming axe in the hand of a dwarf.

12) Uncommon Card #2 –
Darkfire
@
Instant
(@ can only be paid with colorless mana.)
Darkfire deals 2 damage to target creature or player. This damage can't be prevented.

Art: A creature being burned by a fire that doesn't give off any light.

13) Uncommon Card #3 –
Amorphize
2U
Sorcery
Draw a card, then put a card from your hand onto the battlefield face down. (It is a 2/2 creature.)

Art: A very bright elemental floating in the center of a large cavern.

16) Token –
Elemental
Creature – Elemental
2/2
Prismatic (This is all colors.)

On @: An empty colorless symbol with a hard dark outline, and colorless cards with @ in their casting cost have punched-up colorless frame to help them stand out. (Similarly, prismatic cards have a punched-up multicolor frame.) Designing with @ has felt like creating the 6th color, without the difficult backwards-compatibility issues. I imagine @ having access to much of the color pie, but with the general theme of making the opponent's life more difficult - damage that can't be prevented, exiling things, can't be countered, unblockable, shroud, deathtouch, etc.

Ideally @ is as draftable as the other colors in limited, as well as being easily splashed. Colorless instants/sorceries are tricks that might be better saved for set two or three, but I'm presenting it here as an option.

On Cavern: Like the other basic lands, players have access to any number of caverns at tournaments, and can play any number in their deck. I can avoid creating a new basic land type by creating a new rule ~305.6b "A basic land with no basic land types has 'T: add 1 to your mana pool.'" This should avoid some of the rules issues a new type creates. Caverns would be distributed to tournament organizers and through booster packs as a possible basic land. I chose to give player's access to caverns because I didn't want people drafting cards they couldn't cast.