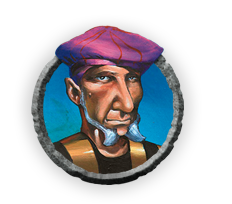 In an underground prison, death is the only escape.

Common Card #3
Decay into Rot
[Fungoid Birth - http://community.wizards.com/magicthegathering/wiki/Labs:Gds/gds2/svanes...
2B
Sorcery
Destroy target non-black creature. Put a 1/1 black fungus creature token with "Sacrifice this creature, target player loses one life and you gain 1 life" onto the battlefield
Art: An ogre is halfway rotted away. His consumed flesh begins to take a new form.

Common Card #5
Enraged Goblin
2R
Creature - Goblin Berserker
2/2
Haste
R: Rage 3 - CARDNAME gets +3/+0 until end of turn. Sacrifice it at the beginning of the next end step. Play this ability only once per turn.
Art: A goblin has impaled himself on a Sentinel's spear, but still landed a killing blow.

Common Card #7
Fury Unleashed
[Makeshift Blade - http://community.wizards.com/magicthegathering/wiki/Labs:Gds/gds2/svanes...
3R
Instant
Target creature gets +3/+0 and gains first strike until end of turn.
Discharge R - You may cast CARDNAME for its discharge cost by removing a counter from a permanent you control.
Art: A restrained ogre snaps apart his magical bonds, stunning and wounding his guard.

Common Card #8
Stalwart Gatekeeper
1W
Creature - Human Knight
2/2
Stalwart - If an opponent controls more creatures than you, CARDNAME gets +1/+1 and has vigilance.
Art: A knight stands alone against a horde of murderers, slaying two as others stream by.

Premium Card (Mythic Rare)
Mylormyx, Arisen
[Mylormyx, Arisen - http://community.wizards.com/magicthegathering/wiki/Labs:Gds/gds2/svanes...
2BG
Planeswalker - Mylormyx
4
+2: Creatures you control have persist until end of turn.
-1: Put two 1/1 black fungus creature tokens with "Sacrifice this creature, target player loses one life and you gain 1 life" onto the battlefield.
-9: You gain an emblem that says: "Whenever a creature you control goes to the graveyard from the battlefield, each opponent sacrifices a permanent"
Art: A giant creature of fungus and rot. Small fungoids spawn from his torso.

Uncommon Card #1
Enclave Aegis Field
2WW
Enchantment
Whenever a creature deals damage to you, put a -1/-1 counter on it.
Art: Several creatures charge through a ring of magical fire and are scarred by it.

Uncommon Card #2
Shackled Tinkerer
3U
Creature - Human Artificer
2/4
CARDNAME enters the battlefield with two -1/-1 counters on it.
1U, T, remove a -1/-1 counter from CARDNAME: Search your library for an artifact with converted mana cost 1 or less and put it into your hand, then shuffle your library.
Art: An artificer shapes his bonds of metal and energy into a magical trinket.

Uncommon Card #3
Insatiable Rot
[Noxious Shroomguy - http://community.wizards.com/magicthegathering/wiki/Labs:Gds/gds2/svanes...
BB
Enchantment
Whenever a creature you control is put into a graveyard from the battlefield, target player loses 1 life and you gain 1 life.
Art: A puddle of rot on the floor engulfs a corpse and exudes noxious looking fumes.

Rare Card
Conduit of Power
2UU
Enchantment
At the beginning of your upkeep, put a charge counter on CARDNAME.
Whenever you cast an instant or sorcery spell with converted mana cost less than or equal to the number of charge counters on CARDNAME, you may pay U. If you do, copy that spell. You may choose new targets for the copy.
Art: A wizard channels energy from a giant overhead crystal into two beams from his hands.

Basic Land Card
Forest
Art: A forest of giant mushrooms. Motes of energy rise from them like spores.

Watermarks are gone. The card concepts should be sufficient to indicate faction.

The pack shows the mechanical core for each faction.

Prisoners have the primary -1/-1 counter interactions, entering the battlefield with them and removing them with triggers or for effects. Countercast (now Discharge) is now a cost reduction mechanic to create shields down moments, get rid of the colored permanent requirement, and because being free really restricted what effects I could use.

Sentinels (formerly Watchers) are perpetually outnumbered, reflected in their Stalwart ability. Additionally, I'm pushing the Sentinels towards playing more non-creature spells to create a pull towards building different decks (particularly in limited). The reward for having few (but not no) creatures is one mechanism. Conduit of Power is another.

Many people questioned why the Natives were important. Mylormyx is the answer to that. He is a native who achieved his planeswalker spark, and then is leading his people in revolt. He is the destabilizing force that sets the events of the block in motion.