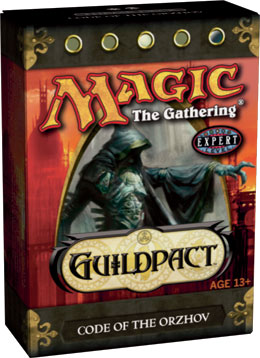 Code of the Orzhov

he Orzhov know how to get what they want—they bleed it out of their victims. Slo-o-owly. While playing the "Code of the Orzhov" deck, you'll strip away all opposing threats while you gradually, relentlessly pick away at your opponent's life total. There's nothing more satisfying to members of the Orzhov than being in complete control of the suffering inflicted on their enemies.

Your first order of business is to set up your defenses. Once you play Souls of the Faultless or Hissing Miasma, or you grant one of your creatures regeneration with Strands of Undeath, your opponent may find that attacking you just isn't worth it! By using your spells to remove select creatures that threaten your affairs, you'll bring the game to a halt. That's when the bleeding begins.

This deck's route to victory is to chip away at your opponent little by little. How? Attack with your 1/1 flying creatures, such as Belfry Spirit (and its batty friends) and Mourning Thrull. Use Orzhova, the Church of Deals to swing a stalemate into your favor. Let Agent of Masks and Blind Hunter do your dirty work for you. The best part of this plan is that the life you squeeze out of your opponent usually winds up padding your own life total.

The haunt ability lets you use some of your best abilities twice: once in life, and once in death. Belfry Spirit and Blind Hunter, for example, both help you from beyond the grave. If you haunt one of your own creatures, you can sacrifice that creature to Plagued Rusalka or Teysa, Orzhov Scion at an opportune time to get that bonus ability right when you need it! With haunt on your side, the longer the game goes on, the better shape you'll be in.

To take this deck to the next level, add more of the cards you see helping you win games. Pillory of the Sleepless is a perfect example: It stops a creature and it bleeds your opponent. Other Orzhov cards from the Guildpact™ set can also improve your deck. Orzhov Pontiff can make your deck much more aggressive, while the diabolical Ghost Council of Orzhova provides a nearly unkillable 4/4 body, more ways to sacrifice your creatures, and more opportunities to drain your opponent's life. When you're beating your opponent a point at a time, every point matters. 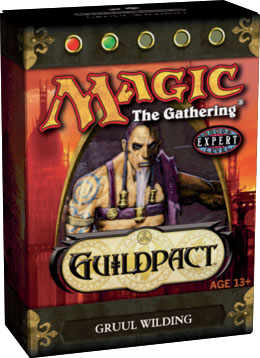 he "Gruul Wilding" deck pounds your opponent with furious monsters. The creatures in your deck are probably already bigger than the creatures your opponent has—but factor in the bloodthirst ability and your power-pumping enchantments and there's no contest! When your opponent starts crying for mercy, don't bother showing any. It's not the Gruul way.

Get your small creatures on the table as soon as possible and start attacking with them. This deck is all about aggression, and you want your opponent to feel the pain—partially because it's fun and partially because you have lots of creatures with bloodthirst, like Bloodscale Prowler and Scab-Clan Mauler. Don't be afraid to play them when you can't get the bonus. This deck will find other ways to make them stronger, and an attacking creature is better than a creature sitting in your hand.

To pump up all your creatures at once, all you need to do is whomp your opponent with Borborygmos. But if he's not around to lead the Gruul into battle, the next best thing is to enchant your creatures with Fists of Ironwood, Fencer's Magemark, and Beastmaster's Magemark. Each Magemark makes all your enchanted creatures bigger, so be sure to spread your Auras around. Gatherer of Graces and Bramble Elemental are particularly good targets; the Gatherer grows stronger when enchanted while the Elemental rewards you with new friends.

If your Auras somehow wind up in your graveyard, Dowsing Shaman can bring them back for more creature-pumping fun. The Shaman is particularly good with Wurmweaver Coil. Play the Aura, sacrifice it to make a 6/6 Wurm, and then return it to your hand to start the process over. There's no such thing as too many Wurms!

To improve the deck, try reducing the number of expensive creatures in favor of more Scorched Rusalkas, Scab-Clan Maulers, and Gruul Guildmages. They'll make the deck faster and maximize the damage you dish out. To add power, check out the Guildpact™ set's other Gruul cards. Some good choices are Rumbling Slum, a four-mana 5/5 creature that guarantees your creatures with bloodthirst all show up huge, and Skarrgan Firebird, a fearsome flying creature that keeps rising from the dead. 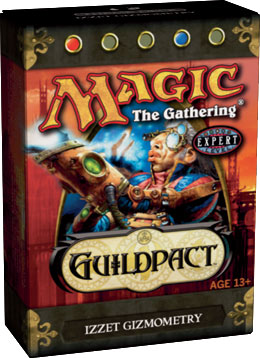 he "Izzet Gizmometry" deck does what the mad Izzet scientist-wizards do best: Whip up tons of nasty instants and sorceries—with explosive results! This deck is jam-packed with instant and sorcery spells, many of which can copy themselves thanks to replicate. Nearly all the creatures in the deck reward you when you play instants and sorceries as well! The replicated copies won't trigger your creatures' abilities, but who cares? You're getting tons of extra spells! It all adds up to an avalanche of magical craziness that'll bury your opponent.

Early in the game, your goal is just to stay alive as you play out your lands. Spells like Electrolyze, Repeal, and Runeboggle all help keep the board clear of annoying attackers while drawing you valuable extra cards. When you can, start deploying your creatures. Gelectrode, Tibor and Lumia, and the enchantment Leyline of Lightning all let you deal extra damage each time you play an instant or sorcery. If you can zap an enemy creature, great! If instead you have to zap your opponent, great! Wee Dragonauts is your main route to victory—depending on how many spells you play, they can bash in for 3, 5, or even 7 damage a turn.

Once you've built up your lands, you can use all that mana to copy your replicate spells a bazillion times. Replicate spells are flexible enough to be good both early in the game and late. Don't hesitate to play Pyromatics or Thunderheads to kill a single enemy creature if you don't have enough mana to replicate them.

Izzet Chronarch is the deck's secret weapon: It lets you pull the exact instant or sorcery you need out of your graveyard. For extra trickiness, use Peel from Reality or Vacuumelt to return Izzet Chronarch and one of your opponent's creatures to their owners' hands, then replay the Chronarch to get that particular spell back. You can keep your opponent's best creature off the table forever.

Like one of the Izzet's mad experimenters, you can customize this deck in a variety of ways. You can combine more Wee Dragonauts and Gelectrodes with cheap card drawing like the Ninth Edition set's Sleight of Hand to churn out bonus damage as fast as possible. Or you can add more Guildpact Izzet cards, like Niv-Mizzet, the Firemind. It's a lot like a Gelectrode . . . that's also a legendary flying 4/4 card-drawing Dragon!