When a game of Magic starts, all cards begin in the deck. Shortly thereafter, both players bring cards into their hands and place them into play. Eventually, some cards end up in the graveyard. Deck, hand, in play, graveyard: Seems simple enough. But there is a "5th dimension" of resources in this game we love, and one that is often ignored: the removed-from-game zone. Sure, people have played with cards like Swords to Plowshares for years, cards that basically banish another card from the game, never to be used again. Most people don’t realize that there are a significant number of cards in Magic which remove cards from the game temporarily, allowing the removed cards to be used as a resource just like those in your hand, your in-play area, your graveyard, or your deck. And in Torment, the ability to remove things from the game for a finite period of time gets the acknowledgement it deserves: the Nightmare mechanic. 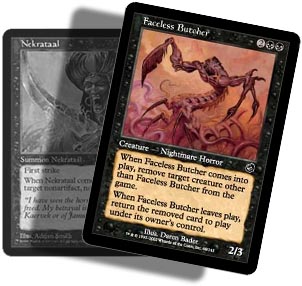 I present to you Faceless Butcher*. One of the most powerful black creatures in recent memory, this Nightmare Horror would, on the surface, appear to be a remake of the black favorite Nekrataal. I don’t wish to dwell on this comparison for too long because the cards have entirely different uses. The Butcher has a higher toughness, can target black and artifact creatures, and removes creatures from the game as opposed to burying them. Well, you ask, wouldn’t you rather have an opposing creature dead than to have it removed from the game with the possibility of returning? Ah, young grasshopper, observe and learn!

Faceless Butcher will remove any creature from the game, with no built-in restrictions. Typically, black removal spells cannot affect black creatures, but the Butcher breaks that rule. In addition, it can be used beneficially to remove your own creatures with comes-into-play abilities from the game. You can remove your own Flametongue Kavu from the game, and should the Butcher die, your opponent will have to contend with having one of his creatures freshly toasted by the re-emerging kavu. Push this one step further: your opponent uses Persuasion to steal your Spiritmonger. Suddenly, you drop down Faceless Butcher to the table, remove the Spiritmonger from the game, and dare your opponent to kill your nightmare!

The card that can most accuratley be called Faceless Butcher's predecessor appeared way back in Arabian Nights, Magic's very first expansion. Oubliette was a cruder version of the Butcher that allowed enchantments to stay on the creature (though it did return the creature to play tapped). The "artifact Oubliette," Tawnos's Coffin, appeared shortly thereafter in Antiquities. This card allowed players to seriously take advantage of creatures with comes-into-play effects (in addition to removing opposing creatures), as you could pick and choose different ways to use it each and every turn.

Legends introduced the second type of card to use the "out-of-game" mechanic. Until then, all cards that removed other cards from the game did so actively. You targeted a creature with Oubliette, or the Coffin, and the purpose was for removing a creature from the game. But with the advent of Knowledge Vault, the removed-from-game zone became the area you placed cards that were waiting to be drawn through delayed activation. These cards were untouchable; without destroying the Knowledge Vault itself, there was no way to directly affect cards set aside in this manner. (Actually, there was one way, but I’ll talk about this unique card at the end.)

The Dark introduced Safe Haven, the first card that could keep multiple permanents in the removed-from-game zone at the same time. That would be the third of the three types of cards that temporarily removed cards from the game.

From the Oubliette school, Oubliette begat Tawnos’s Coffin which begat Icy Prison (Ice Age), which begat probably one of the most fascinating spells in all of Magic, Ertai's Meddling. This spell removes another SPELL from the game, delaying it from resolving for a number of turns. One of the articles I plan to do is a retrospective of all the most powerful cards in Magic that were never used in tournament play, and when I do, Ertai’s Meddling will be very near the top of that list. (If you have any cards in mind that you think should be featured, please drop me a line at uncommonknowledge@wizards.com.)

But I digress. The next card in the line appeared in Urza’s Destiny as Flicker, the first card that could remove an enchantment from the game. 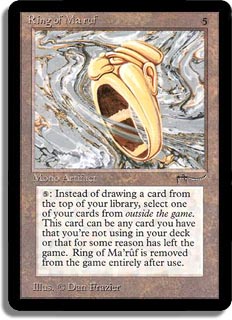 Interesting fact: If you remove a local enchantment from the game temporarily, and it returns to play, you get to choose the new target for the enchantment. For instance, if your opponent has a Gaea's Embrace on his Hollow Dogs, you can Flicker the Embrace and place it on a creature of your own. Sure beats just sending it to the graveyard with a Disenchant!

Liberate from Invasion was the last of these types of spells until Torment came along. And now with Torment this mechanic has a name (Nightmare!), and several cards that utilize this extraordinary ability. And with that, I’ll remove myself from the column for a week and see you next time for a very special look at black.

Oh, and the single card in all of Magic: The Gathering which can affects removed-from-game cards is Ring of Ma'ruf. Under tournament rules, it can either fetch a card that is in your sideboard, or a card that has been removed from the game by any of the means I mentioned above.

NEXT WEEK: From Abandon Hope to Zombify

*: You can get a free Faceless Butcher card - and a lot more Torment preview information - in InQuest Gamer magazine #82. On sale now!