the Magic is a place where you'll find a lot of talk about Magic's flavor, be it art, story, card naming or whatever. Today, we're going to twist the format just a tad. Instead of talking about Magic flavor, we're going to talk about talking about Magic flavor. Yes, I know that sounds a bit weird, but there is a phenomenon that takes place when people talk about Magic that I think deserves a little discussion. The reason Taste the Magic is the place for this is that this phenomenon takes place most often when Magic fans discuss Magic art.

The word “phenomenon” makes it sound like this is some otherworldly event that is only experienced by looneys and people who've had one too many. This is not the case. In fact, you have probably seen it happen more than once. Brace yourself, this is what it looks like:

“Magic art was better back in the old days.”

What!? What is it that makes this rather mundane statement a phenomenon? Is it that all Magic fans feel this way? That would surely be a phenomenon. Yes it would, but no, they do not.

Is it that these words are, when uttered with Iron Maiden's “Number of the Beast” in the background, also an evil incantation that summons a horrible demon? That would be cool, but no. The phenomenon is all wrapped up in the glittering wonderment of “the old days.”

I have a theory about this that I will call “The Golden Age” theory. Don't worry, it's not about old folks or Matlock or Shirley Temple Theater. It's about Magic. It is my hope that my theory might give you a different perspective on the way you think and talk about Magic art.

Before I spell out my theory, let's take a look at the phenomenon in action. Here's how the scene is set. Three Magic fans; Todd, Maria, and Walt, are hanging out in a basement or at a pre-release or in a game shop. They're chatting, of course, about Magic. One of them holds a Kiki-Jiki Mirror Breaker card and makes a comment about the art. “I love goblins, but they were much cooler looking back in the old days.” Her two pals each nod in agreement. The phenomenon takes place. The mystical powers of the words “the old days” takes hold and each one of them drifts off for a moment to remember when Magic art was much better. The strange thing is, they're each remembering a different time! 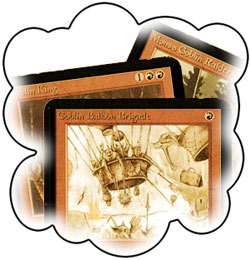 Todd is a long-timer, and trips back to the beginning of it all for his warm, fuzzy feelings about Goblin art. 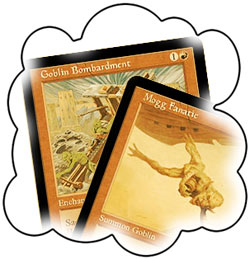 Maria has been playing almost as long as Todd, but was a self-proclaimed “scrub” until she buckled down and really learned the rules right around the time Tempest came out. Shiny, happy Tempestland is where Maria goes when Magic of the “old days” is invoked. 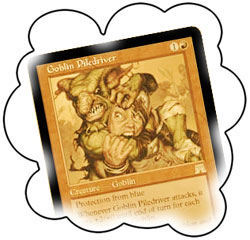 Walt was taught to play by Maria just a few years ago. He knows all the tricks she knows, and owns more old cards than even Todd, but his twinkling journey into the “old days” only takes him back to the days he first learned to play- when he caught the Magic bug.

Piledriver baby! It does not get any better than that.

While I would love to be able to say that Walt clearly knows an artist who can kick out sweet Goblin art, I cannot do that. I cannot, because my “Golden Age” theory does not allow me to.

The theory is that Magic is a personal and precious thing to those who play it,
and the strong feelings they have for this amazing game can warp their objectivity.

For most people, the strongest emotional feelings for Magic occur right when they learn to play, like Todd and Walt. It's when they catch that indescribable fever that compels them to think and talk about nothing but Magic. They spend their last cent on booster packs and they bore their non-Magic-playing pals to tears with talk of cards. Others feel their strongest connection to Magic when they reach a milestone, like winning a first tournament or inventing an infinite combo deck or qualifying for the Pro Tour. Whatever the circumstance is, an intense connection to the Magic cards of that time places an emotional imprint on the mind. 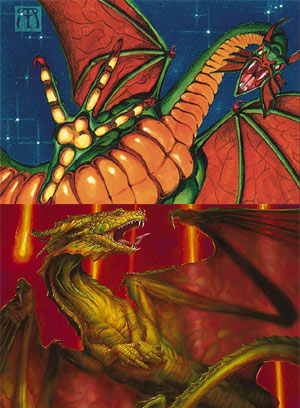 For example; I learned to play right around when Revised Edition came out. I was hooked like a hungry bass. I could not get enough of this game and its little cardboard wonders. It was like puppy love, or a honeymoon- except that I was in love with Amrou Kithkin and we honeymooned in the City of Shadows. My feelings for the cards of this time are changed because they have been imprinted with the feeling of wonder I had at that time. Shivan Dragon was the first card I ever “chased.” Melissa Benson's colorful, storybook-esque dragon defines that time for me. Though every fiber in my artist's body tells me otherwise, I cannot help but feel it is better than Donato's version. I can tell you all sorts of reasons why Donato's painting is a superior piece of art, (and I truly believe it is). It is a museum-quality painting, with technique and color and composition that make the artist and fantasy goob in me gape in amazement. Melissa's dragon does not do this. And yet it still holds my heart like Donato's never will. “The Golden Age” theory is in effect big-time.

Magic cards are like cars, or music, or even a “significant other.” They have an emotional hold on a person, with the ability to elicit irrational feelings. Like my affinity for Melissa's Shivan Dragon, I have an irrational love of the Chevrolet Citation. It was my first car, and I called it the “Ion.” Even though it was a complete crapmobile, I cannot think of it as anything other than the best car ever. Every single car I have driven since then has been mechanically and aesthetically superior to that Chevy, but none hold my heart like the “Ion.”

My first car was my “Golden Age” of driving. My first Magic set was (one of) my “Golden Ages” of Magic. I have been lucky enough to have occasion for more than one soft spot in my heart when it comes to Magic. Learning to play was one (Revised Edition), my first Magic art job was another (Mercadian Masques), and coming to work for Wizards was the third (Ravnica.) Since I am aware of these three tender moments, I can step back from the fuzzy feelings I get when I think about them and make more informed statements about cards from these times. This is the sort of thing I am hoping could happen for you. As an artist who has been working on Magic for about 7 years, and a member of the Creative Team for 1 year, it really saddens me to hear people lay out blanket statements about how new Magic cards are inferior to “the old days.” I would like to think that the art I have done has made some miniscule step in a positive direction. I would also like to think that 10 years of history have allowed those of us in R&D to create cards even better than their predecessors. I would really like to think that my “Golden Age” theory is the reason why you have sometimes heard people loudly claim “Better in the old days.”

The old days were different. In some ways they were better, in other ways they were a Chevy Citation. Let's look upon them with Sunglasses of Urza and be happy that we have a game that can bring us such deep feeling. Let's also be aware that we are wearing these glasses, and remember to take them off when we are bandying opinions on Magic art, or any other facet of Magic. Cards cannot choose when they are printed, and they cannot change the time of your “Golden Age.” When TTM inevitably raises the subject of Magic art, let's try to give cards from all “Ages” a fair shake.

A while back in my feature article, Say My Name, I hinted at a little tidbit that is in Ravnica. Now that the pre-release is over and the cat's out of the bag, let's take a look at what it is.

If you did not get a chance to read that article, or you just don't remember what I'm talking about, here are some snippets from “Say My Name” that will clue you in.

Which Ravnica card is it that makes Papa FedEx so proud? It's Hex . This sexy sixer is not packaged for size, like Fog or Myojin of Infinite Rage , it's packaged for pizzazz! When it came time to name this card, a 6 casting cost card that kills 6 creatures, I knew there was only one way to wrap it up- in a 6-pack! We hunted for names that had “Six” significance, while still making sense on the card. Hex was a surefire winner. I did some extra delving into somehow turning it into a 6 letter name (The Hex and Dethex were options, but “The is generally avoided and “Dethex” is pretty dumb.) So Hex it was. It means both “6 sided object” as well as “curse.” Winner. 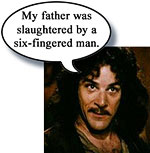 It doesn't stop there. The art is part of the 6 pack as well. Six little voodoo-like figurines are toppled, signifying their magical doom. I have a corny wish that the hand that is toppling them had 6 fingers.

But wait! There's more. I wanted to push this bad-boy to the limit with a 6 word piece of flavor text. I received this gem from our very own Mark Rosewater, “When killing five just isn't enough.” Ha! 6 words, and it's talking about offing six dudes as well! What a party. Hex is my favorite, but Ravnica has another really well-packaged card name, though this one might require a forklift to handle. Check out Autochthon Wurm. With a casting cost of

, this behemoth was just begging for a long, nearly incomprehensible name.