The Horror, The Horror... Put Three Horrors on the Stack

Boros Deck Wins had a clearly dominating week this week; though Tsuyoshi Fujita's Stone Rain deck from Pro Tour: Los Angeles has led all decks in number of players to reach Top 8 a couple of times, the Swiss rounds standout doubled the number of Blue Envelopes taken this week at two. It really says something about the diversity of a format when, after nearly two months of amateur tournaments post-Pro Tour, more than 20 archetypes remain viable.

The real story of the week, though, is the emergence of another aggressive deck, Ichorid. Moving from zero to sixty in less than seven days, Friggin' Rizzo's pet deck has gone from a completely unknown commodity to the dominating deck of the format. I am certain that it was the strongest performer by percentage of all decks last week, and the raw numbers put it in fourth place already (third if you don't count Affinity's lack of invitations despite number of raw Top 8s). For example, in the PTQ in Newington, Connecticut, there was, I believe, one Ichorid deck played total, and it went undefeated in the Swiss; the deck took both first and second place in Butler, PA along the way to its lone Blue Envelope, and peppered additional PTQ Top 8s. Consider if you will the raw number of players who consistently don't make Top 8 with highly popular decks like Boros Deck Wins and NO Stick and then compare the numbers on the week's Top 8 tallies. Ichorid finished within two rungs of top position with perhaps 1/20 the player support that Boros Deck Wins commands.

This is the deck I used in Newington: 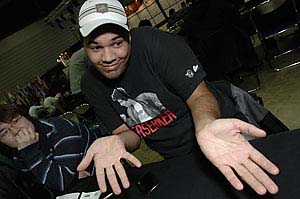 This version remains fairly close to the Osyp Lebedowicz deck discussed in the World Championships Blog. The most important difference, other than cleaning up the main deck numbers (i.e. no Dimir Infiltrator) is in mana base and aggressive sideboard. I played two Riftstone Portals in the main deck and two additional copies in the sideboard to support an overwhelming thirteen total anti-Affinity cards.

Affinity is, if not the deck's worst match-up, its worst expected opponent. The problem is that a bland Affinity draw of Myr Enforcers will be able to trump Ichorid's nuttiest 3/1 draws (though almost no deck can stop the deck's most Wonderful Teeth draw). As such, the direction I decided to take the deck was to ensure that Affinity couldn't win sideboard games (turn 1 Putrid Imp discarding Riftstone Portal, turn 2 Kataki, War's Wage was a common opening), relying on the fundamentally superior game plan of Ichorid to beat any other strategies. This worked up until the Top 8, where I lost my first (and last) match on the day after cleverly declaring three mulligans into a four card, no land, hand.

While many players figured out the Riftstone Portal tech independently, Adam Yurchick's deck from Butler, PA runs a more rounded sideboard and a completely different engine:

Notice how he has two Incarnations main and a mirror Incarnation side. In addition, Yurchick is prepared for multiple matches (CAL, mirror, and especially the hated Heartbeat of Spring) with Coffin Purge access. However, the dramatic graveyard engine Adam's deck has over the one I played is Tolarian Winds.

Consider the Dredge power of Tolarian Winds… You open up by discarding your hand, which might contain Golgari Grave-Troll, or Stinkweed Imp, or both. With Tolarian Winds, you can replace draws with these Dredge spells, ensuring that half your deck is in the graveyard as early as turn two! A two Incarnation – and certainly a three Incarnation – version can expect to have evasion online, Ichorids should be ready with perhaps a two turn clock, and any Psychatogs played will be lethal should they get through. Tolarian Winds is high on the raw power scale, and can super charge the engine of the deck, though it makes many opening hands less steady.

Now a lot of you probably look at these Ichorid decks and wonder how they work. No, they are not intuitive – or even pretty – decks to look at. They are not pretty decks to watch operate, either, though they are a blast to play. Basically you evaluate your opening hand and look if you have some kind of discard outlet (say a lowly Putrid Imp) and if you have a Dredge card. The presence of both elements (and presumably the mana to play the discard outlet) makes for a reasonable hand. Now the difference between Ichorid and other decks is that once you decide your hand is good enough to keep, that's it. You don't really get any more cards.

Assuming you have the lowest generally viable hand, you will generally discard your Dredge card on upkeep, giving your Putrid Imp the ability to vault over any Arcbound Workers, Hounds of Konda, or Llanowar Elves your opponent may have made, and then Dredge on your draw. If you can get to seven cards in the graveyard, great; you might as well hit for two.

Dredge is unusually powerful in this deck. The goal is to mill more and more of your library with Grave-Trolls, filling it with flashback spells, Ichorids, and sundry Black creatures. You will continually “upgrade” your Dredge potential, turning Life from the Loam into Stinkweed Imp into Golgari Grave-Troll for more and more access to more and more of your ‘yard. Turn after turn you will be returning Ichorids to play “for free” and attacking with hasty 3/1 Horrors. Few decks can resist this offense, because 3/1 is big enough to trade with most of Extended's commonly played creatures, and elimination spells don't really hold down the Horrors over the course of multiple turns. Unlike the number of Lava Darts you are willing to spend, or the number of Watchwolves you can put in front of the Ichorids to trade, the Odyssey Horrors don't run out. Golgari Grave-Trolls keep them relentless.

Ichorid is also the best offensive Psychatog deck in the history of Magic. Psychatog is the best overall creature in the game, and there is no deck where Dr. Teeth's offensive capabilities shine more brightly than in this one. If you play a second turn Psychatog off a Chrome Mox, your opponent (who probably just tapped out for a Sakura-Tribe chump blocker) might just die immediately. Between Deep Analysis, Tolarian Winds, and Cephalid Coliseum, setting up a lethal Psychatog is fairly academic via Dredge cards as long as you can get it through.

That said, Ichorid's “fall back” plans, though not as unstoppable as the two above, are both more than good enough to win regular games. Zombie Infestation is in the deck as a general discard outlet for Grave-Trolls and Stinkweed Imps, but it does make 2/2 attackers as well; over the course of a long game where you've flipped Life from the Loam, Golgari Grave-Troll itself moves from pure library manipulation engine to legitimate threat. As each Grave-Troll in the late game is generally a 10/10 or larger flying creature… and almost can't be killed.

What I've basically spent the previous dozen paragraphs saying is this: Be aware of this rising new archetype. Last week you may have had a free pass, but this week, Ichorid is going to be all over the PTQs. Be ready. The deck completely invalidates many older strategies, can mulligan to five (though apparently not four) and thrash the average draw. As its goal is to basically dump its hand, deck itself, and get its creatures killed so that they can come back bigger and with less resistance, the deck is virtually immune to conventional disruption. Its enemies are few.

On the other side of the color spectrum, a rogue deck that has quietly been dominating its local scene is Mono-Green Chalice of the Void. Carl Hendrix took the PTQ in Fort Worth, Texas, which is the second Blue Envelope for this archetype:

2 Kodama of the North Tree 2 Arashi, the Sky Asunder
48 Cards

The all star of this deck is Chalice of the Void. A Chalice with two counters largely turns off the hand of a Boros Deck Wins or Zoo player. The Mono-Green deck has really powerful creatures, many of them huge, and strong enhancement elements from Umezawa's Jitte to Elephant Guide.

Sharing the unusual Green Blue Envelope list this weekend is Kyle Goodman's Tooth and Nail. The onetime dominant Standard deck gains little from Extended's greater card pool, but those gains are substantial. Moment's Peace is a great Time Walk proxy in this deck, especially looking forward to a last week and Grand Prix that look to be covered in Ichorid decks, and Windswept Heath, though a minor tweak, allows the deck to summon Kataki, War's Wage after sideboarding.

The last thing I'm going to say going into the deciding week of Honolulu qualifiers is the same thing I've been saying week in and week out this season: Heartbeat of Spring seems really under-represented given the metagame. Heartbeat is the nightmare pairing for Boros Deck Wins… It can even counteract the Boros deck's relatively thin disruptive elements with Sakura-Tribe Time Walk and Rampant Growth! If Boros Deck Wins continues to be the most populous deck in the last week – and it probably will be – that fact alone justifies a Heartbeat option. More importantly, Heartbeat of Spring is one of the few decks that can trump the ascending Ichorid without twisting itself into a strange and unusual shape. Ichorid wants to deck itself? Heartbeat can exploit that and even win “low Tide” style with the help of the Black player's own Dredge mechanics; Ichorid attacks with a relentless stream of unkillable 3/1 creatures and/or a quickly lethal Psychatog… but no counters. Heartbeat has the best possible response given the format in Moment's Peace. Among archetype decks, Heartbeat of Spring may be the right deck to solve the metagame in this, the last week of PTQs.