Are the Vampires strong enough to take home the top prize at Pro Tour Ixalan? Tune in to twitch.tv/magic all weekend long to follow the action live from Albuquerque, New Mexico!

When the full Ixalan Card Image Gallery was released, my first impression was that Dinosaurs was a complete deck, Pirates had potential, and Merfolk and Vampires would have to wait for Rivals of Ixalan to be competitive. While I feel mostly correct on my initial assessment of Merfolk, Dinosaurs, and Pirates, there have been a couple of Vampires decks showing up on Magic Online that are making me rethink my position.

Take, for example, this deck that juggler314 played to a 4-1 result in a Standard Competitive League:

This is not a dedicated Vampire deck, but it uses Vampire synergies in the form of Mavren Fein, Dusk Apostle and Duskborne Skymarcher. Mavren Fein in particular is a card that plays out much better than it looks. If you start with a one- or two-drop Vampire, then it already gives you an advantage right off the bat, and it triggers itself on an otherwise empty board.

The main issue with this deck is that, right now, it's a little all over the place. It has the Vampire synergies, it has Cartouches and Trials, it has Crested Sunmare and lifelinkers. I think it's spread too thin, and if we want to make it work, we should focus on one or two of those aspects and maximize them.

The part I'm looking to maximize is the Vampire tribal component, specifically Mavren Fein, Dusk Apostle. Standard right now is particularly vulnerable to swarms, since most decks are looking to play one blocker or one removal spell a turn, and while you do become more vulnerable to sweepers if you go this route, a lot of the creatures in the deck are naturally resilient to mass removal; Scrapheap Scrounger comes back, and both Adanto Vanguard and Yahenni, Undying Partisan can become indestructible, which should be enough to overcome Fumigate.

There are currently eight cheap Vampires in the deck, and we have to add some more if we want to get the most out of Mavren Fein. You could play Gifted Aetherborn, but the mana doesn't support playing it turn two every time, so I think the best option is Metallic Mimic, which is both a cheap Vampire to trigger Mavren Fein and also a payoff for when you do trigger it. If you start with a turn-two Metallic Mimic and can follow it up with Mavren Fein, you'll get at least a 2/2 lifelinker and a 3/3. If left unchecked, Metallic Mimic will pump all the tokens from Mavren Fein and Adanto, the First Fort, making sure you win all the long games. 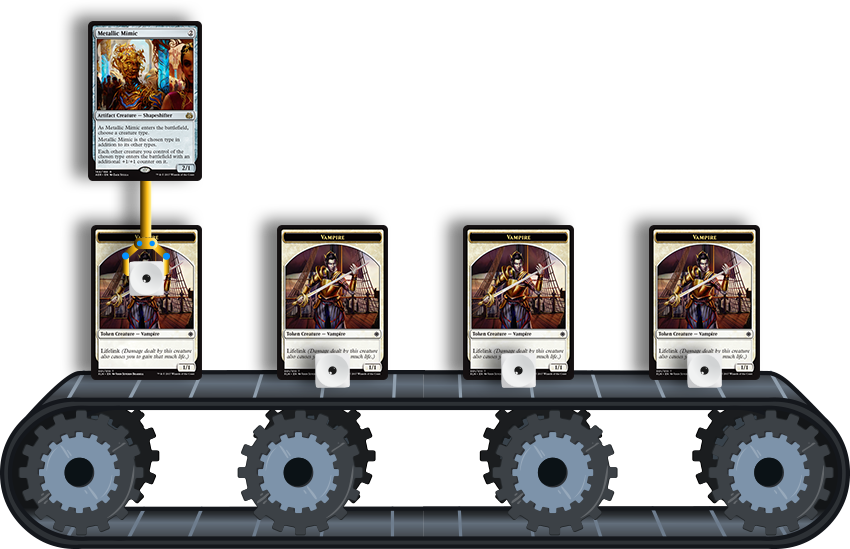 Another card I'm interested in adding is Trial of Solidarity. Not only do you have a lot of creatures in your deck, but you're also already running Cartouches to bring the Trials back. This should let you break through with your tokens if the ground stalls. They aren't very good with Bontu the Glorified, but I think Bontu is a bit weak in the deck as well, and I wouldn't mind removing it.

To add Mimics and Trials, I think we should fully remove the Crested Sunmares from the deck. They're great if you can reliably trigger them, but I'm not interested in playing Bontu or Cartouche of Ambition to begin with, so I'm not going to have many ways of gaining life. Removing Cartouche of Ambition means the Trials are worse, but Cartouche of Solidarity should be enough to make them work.

This is how my deck would look: