Are you ready to make your opponents Walk the Plank?

When Ixalan dropped, it was easy to see that Pirates had some potential in Standard. While the dedicated Pirate deck never took off, cards like Kitesail Freebooter and Hostage Taker found their homes in top-tier decks and proved the power of our high-seas-sailing friends. Rivals of Ixalan brought a bounty of new Pirates to plunder with, and it's these new options that make the difference.

Daring Buccaneer is the most powerful new one-drop option, and its requirement to reveal a Pirate to play it on that first turn means (as Frank Karsten pointed out) its only home will be in a deck full of Pirate friends. Hitting a critical mass of one-drops—somewhere between eight and twelve, an exercise left for the format and reader (and Frank Karsten) to solve—gives aggro decks the fast start they need to close out a game quickly.

Fanatical Firebrand is an echo of and homage to Mogg Fanatic, but tacks on Raging Goblin to boot. While 1 power isn't going to win any games by itself, attacking on the first and second turns is a nice ten percent of an opponent's life total in damage, while giving you the option to sacrifice it for 1 more point of damage elsewhere if the opponent puts up blockers.

Grasping Scoundrel is the "least exciting" new one-drop, but as a de facto 2/1 on the offense it fills an aggro deck's one-drop slots perfectly well. Savannah Lions is fondly remembered as the forerunner of all "2/1 for one mana" creatures, and looking over at the Vampire option of Skymarcher Aspirant shows how far we've come since.

Of Ixalan's Pirate one-drop options in Deadeye Tracker, Siren Stormtamer, and Rigging Runner, only the Siren was particularly strong on the first turn since flying as evasion (on top of the occasional counterspell option) fueled both card selection (Shipwreck Looter) and aggro (Storm Fleet Aerialist).

Rivals of Ixalan didn't leave us hanging for things to play on the second turn either.

There are more plentiful and powerful two-drop Pirates available. Not only did Rivals bring the heat on the first turn for Pirates, it added important options for the following turn as well.

While the common two-drops, specifically Goblin Trailblazer and Kitesail Corsair, are outclassed outside of Draft, it's clear there are way more Pirates pushing the range of potential now. In fact, each of the three Pirate colors (blue, black, and red) got a great new two-drop.

Dire Fleet Daredevil will feel familiar for anyone who played with Abbot of Keral Keep—a solid play on the second turn (following up Daring Buccaneer, for example) that lends itself to great plays later in the game as well. If your opponent is playing spells like Harnessed Lightning or Fatal Push, using their own removal against them is fantastic. If you're flooded on mana, using a Confiscation Coup or Entrancing Melody to steal something bigger like Hazoret the Fervent or Jadelight Ranger (a card that's sure to see some play!) can give you a way back into the game. The Daredevil also comes with 2 power and first strike, which is a solid set of abilities at two mana.

Dire Fleet Poisoner is a much sneakier Pirate, playing a different role if it's a two-drop of choice for you. With flash, you can wait to cast it until it's most convenient for you—or inconvenient for opponents. Curving Grasping Scoundrel into Dire Fleet Poisoner means you can hit for 3 damage on your second turn and threaten attacking for at least 4 on your third. Packing and adding deathtouch also makes blocking hard for opponents who may want to hide behind a Heart of Kiran or Aethersphere Harvester, forcing a trade and limiting the amount of damage an opponent can avoid. Against some decks, waiting to play a creature at the end of their turn is just better, and the Poisoner is one of the three total Pirates with flash we can use to play that way.

Warkite Marauder is blue's best new two-drop, and it does a pretty fair impersonation of Ahn-Crop Crasher. By turning the opponent's best defender into a have-nothing know-nothing 0/1, it forces them to either give it away in a block or just take the damage. Unless your opponent is at a precarious life total already—which is good for you—you can bet they'll take the damage and keep their creature . . . just like the how Crasher works in red decks. Unlike the Crasher, Warkite Marauder also has flying, further limiting the options for opponents trying to stymie the raids you're making.

It's important to note that one- and two-drops aren't the only essential pieces to making Pirates work. But what Rival of Ixalan really pushes is Pirates with distinct two-color themes.

Two-Color Pirates is better than Three-Color Pirates. Admiral Beckett Brass is an amazing Pirate leader, but the newest cards from Rivals push three-color aside for decidedly two-color pairings. Not only does the three-color mana base not work out well, the density of options for each color means you can now have the best of both worlds: consistency and synergy. 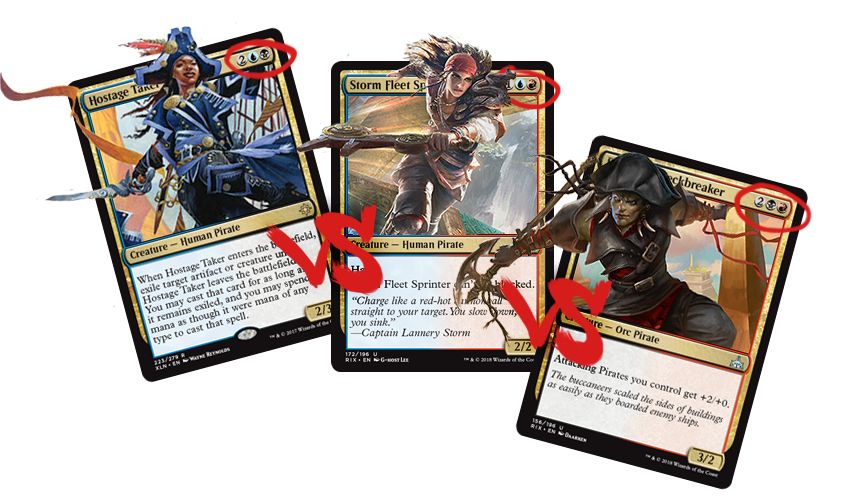 Storm Fleet Sprinter is a new iconic card for blue-red Pirate decks. It's got double evasion: haste to surprise opponents and the literal rules text "can't be blocked." If playing around with Pirate's Cutlass is on your radar, this is the best Pirate to pick it up.

Dire Fleet Neckbreaker is among the most expensive Pirates—a hefty four mana—for aggressive black-red Pirate decks, but dropping this on the fourth turn and attacking with three other Pirates will force your opponent to defend or die. While the non-Pirate option Hazoret the Fervent looms large at the same cost, different aggressive decks will play out in different ways and can leave room for a different sort of four-drop.

Hostage Taker is from Ixalan, but as Rivals doesn't add anything remotely close in power level to the blue-black Pirate count, the flagship choice remains a reason to look at that pairing. Answering and potentially stealing an opponent's best creature still fulfills an excellent role, opening up opportunities for aggression and giving some late-game gusto to Pirates.

So how do these new options shake out for decks?

With haste and flying everywhere, Pirate's Cutlass may be one of the best ways to leverage Pirate tribal synergy. Adapting the proven package of Kari Zev, Skyship Raider; Earthshaker Khenra; and Lightning Strike to a Pirate-flavored package with Lookout's Dispersal and Storm Fleet Aerialist means we can go all-in on attacking and back it up across the board. Any Cutlass on the battlefield turns Fanatical Firebrand, Storm Fleet Sprinter, and Captain Lannery Storm into fast damage. If you want to get tricky, shoehorn in a copy or two of Desert of the Fervent or Desert of the Mindful, a creature like Shipwreck Looter, or even Jace, Cunning Castaway to help massage away extra lands.

Coverage personality Riley Knight shared a different flavor of blue-red Pirates in case Jace and Hazoret the Fervent are more your style:

Pro Tour Hall of Fame player Paulo Vitor Damo da Rosa also took a look at potential Pirate builds. For him, different flavors of blue-black held the most potential. One angle was looking closely at Curious Obsession rather than Pirate's Cutlass.

Drawing extra cards while pummeling the opponent is a dream for aggressive decks, and Curious Obsession backed up with counterspells can mean an avalanche of advantage opponents can't recover from.

Paulo also went with the obligatory controlling angle with Hostage Takers, for anyone who wants to sail the seas at a more controlled speed:

As Paulo put it: "This is a different take—it's much less aggressive, and instead relies on a series of powerful, must-kill creatures to eventually exhaust your opponent's removal spells and eventually take over." If opponents see a Siren Stormtamer and expect a fast deck, they can be surprised by the longer plans Paulo's Pirates partake in. Cards like Chart a Course and The Scarab God take a page out of control decks while making the most of tricky Pirates such as the Stormtamer and Dire Fleet Poisoner.

But going all-in on aggressive Pirates is what the black-red build is all about, and something like this can overwhelm opponents before anything else matters:

Forerunner of the Coalition is a neat search effect for Pirates, and in a deck like black-red it can shine. It can set up the Pirate you need next—perhaps something with haste like Captain Lannery Storm, perhaps a trick to push through damage like Dire Fleet Poisoner, or perhaps an overwhelming power push with Dire Fleet Neckbreaker; whatever Pirate you want, you can go get it. It's also a deck that can take advantage of Ifnir Deadlands, helping ensure extra mana won't go to waste.

Playing 22 lands is pretty tight, but the low mana curve and ability to search or draw extra cards will help keep the deck topped off with relevant plays.

It's obvious Vampires, Merfolk, and even Dinosaurs have nothing on our deck-swabbing alliance. With all these options available, there's only one question remaining: Which team of Pirates will you sail into Standard with?