Standard Decks You May Have Missed from the Pro Tour

We all know the story of the Top 8 decks of Pro Tour Guilds of Ravnica by now: a sea of aggressive Red-White Aggro decks with lonesome Jeskai Control and Izzet Drakes representing "anything" else.

While it's true Red-White Aggro emerged on top and will be an impressive deck until Ravnica Allegiance rolls around in January, it's also true there's a little more to the story. The Top 16—often known as "those who narrowly missed Top 8 by just one match somewhere during the tournament"—showed a little more representation from the format:

In the world where the Top 16 and Top 8 finished in flipped order, it'd be control decks that looked a little more dominant where four different archetypes made an appearance. And digging deeper into Pro Tour Guilds of Ravnica standings by format reveals even more interesting decks.

For example, Guillaume Gauthier picked up a perfect 30 points in Constructed, missing a better finish by going just 2-4 in Draft. His deck of choice?

Just like the powerful Red-White Aggro decks, Mono-Blue Tempo is low-to-the-ground aggression built on one- and two-drops. Mist-Cloaked Herald and Siren Stormtamer are both evasive, with the latter building in a counterspell for removal. Merfolk Trickster keeps the path open when countermagic isn't needed, and Warkite Marauder keeps the offense afloat by neutralizing the best blockers.

But none of that is successful without the toolkit blue offers here. Curious Obsession not only pushes through more damage, it allows an aggressive deck that's playing out its cards to draw more of them. It's also just one mana, and on a creature like Mist-Cloaked Herald, you'll always have an attack to make.

Tempest Djinn is as big as the creatures get, but when your mana base is just 20 copies of Island, it's fair to say that if it lands on curve, it's a 3/4 with flying and a critical 4 toughness. Shock, Lightning Strike, and even Deafening Clarion can't deal with it.

Dive Down, Spell Pierce, Wizard's Retort, Negate, Essence Scatter—Mono-Blue Tempo drops early pressure then defends it by disrupting the opponent. Unlike those other aggro decks that might fold to an unexpected Settle the Wreckage, Mono-Blue Tempo won't let you down.

But Pro Tour Guilds of Ravnica wasn't just about aggressive decks. Both Esper Control and Grixis Control had solid showing in the hands of excellent players, as did Dimir Control piloted by Mark Jacobson.

Jacobson notched 21 points—a 7-3 Constructed record—with his take on control. More importantly, since Wilson Mok played his Round 16 match out against Makihito Mihara (which both knocked Mihara out of Top 8 contention and ensured Mok would have top seeding in the playoff), Jacobson was playing for a potential win-and-in to Top 8 against eventual Pro Tour Champion Andrew Elenbogen.

The narrow difference between sneaking into Top 8 and missing Top 16 really can come down to one match!

Jacobson's deck is precisely the kind of control deck you'd imagine described as Dimir. Eschewing both white and red like the popular Jeskai Control builds, Dimir Control leans totally on black removal and signature blue-black cards in Standard to take over games and close them out.

Thief of Sanity, Hostage Taker, and Doom Whisperer are a three-four-five curve of threats and answers that no other deck offers. Thief of Sanity effectively draws you extra cards against most decks by feeding you a steady stream of extra spells you can cast. Against aggressive decks, you can take powerful things like History of Benalia or Conclave Tribunal away from them. Against other control decks, the extra Negates and countermagic will add up quickly.

Of course, Hostage Taker removes a creature that's already hit the battlefield while Doom Whisperer is a gigantic 6/6 that can block, attack to end a game quickly, and convert life into card selection.

Unlike the countermagic-heavy blue control decks you saw more often at the Pro Tour, Dimir Control looks to answer more of what's in play already or what's waiting in the opponent's hand. Fungal Infection, Cast Down, Vraska's Contempt, Ritual of Soot, The Eldest Reborn, Moment of Craving, and Golden Demise attack creature decks trying to beat you down. Disinformation Campaign, Thought Erasure, and Duress rip away opponent's options before they can cast them. 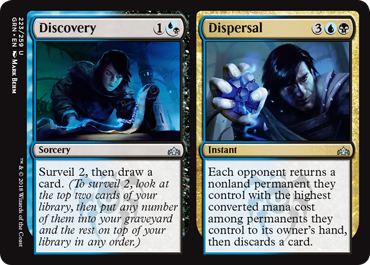 But the hands-down most interesting deck—at least for me—was what Mak Wai Hou wielded to a 6-4 (18 points) Constructed finish:

Big Red is the kind of archetype that pops up over time, when red has a range of answers and a reason to lean into some of the larger midrange things it can do as a color. Against a sea of aggressive decks, cards like Demanding Dragon look great: if your opponent sacrifices a creature, they're down one more way to close the game, but if they don't they're taking 5 and still facing down a large 5/5 blocker in the way. Electrostatic Field similarly blocks well and ensures the series of red removal spells to follow inch a life total down along the way.

Goblin Chainwhirler still kills multiple 1-toughness creatures while Rekindling Phoenix is still the powerful, hard-to-kill blocker and flying threat we know it for. It's a simple-looking deck with a ton of answers, threats, and consistency all baked in with more options and ways to navigate matchups in the sideboard:

If you want to surprise the competition this Friday, or try something fresh on MTG Arena, these three decks from just outside the Pro Tour Guilds of Ravnica feature match view are a great place to start. Good luck!