I Freeze, Therefore I Am

is said that the indigenous peoples of the North American Arctic regions have more than a hundred different words for snow. There’s a word for light, crystalline snow, and one for heavy wet snow. There are words for the crust-like snow on the top and the downy puff beneath. There are words for all of it. But something tells me that even the most verbose would not have a word for the snow that comes to life in the form of a bird-creature-thing, or for snow that is comprised not of frozen water but of frozen magic. Well move over igloo-dwellers, because we have a word for these! It’s called…SNOW!

While the word itself seems pretty ho-hum, there is a lot to it beyond these four obvious letters. While the Ice Age creative folks found it acceptable to have just one kind of snow, we decided to take it a step further and make all sorts of snow cards. Once the rules issues were hammered out, it seemed to be an easy decision to make: all permanent types could be “snow” permanents. It was an easy decision for the card designers, but it was not so easy for the Creative team to deal with.

It was important to us to have a “rime” to the reason (pardon the pun—it was too fat to pass up). What is “snow”? How could enchantments be “snow”? What made creatures or artifacts “snow”? How did they get that way? Why didn’t it happen 20 years earlier during the original Ice Age? As it turned out, the answers to these questions blended in really well with big picture decisions we had already made about Coldsnap.

The big question, 'What is “snow”' found its answer in the big decision to have a quick and unnatural return of magical winter. “Snow” would end up being the word that describes something that is “touched” by the powerful Rimewind ice magic that threw the blanket of winter back over Terisiare. “Wow, that was easy,” we thought. Well, nothing is ever that easy. Snow cards had to mingle functionally with the Snow-Covered Land cards of Ice Age. So it seemed like we needed a way to have Snow cards that were not necessarily a direct product of Rimewind magic. After a few days of frozen vigil inside a hollowed out ice cave, we found the answer, and it is hinted at in the flavor text of Boreal Druid.

Some creatures are bound to the cold by Rimewind magic. Others seek it out, adapted by two thousand years of the Ice. The Boreal, where Heidar’s frigid sway is strongest, is home to both.

While this flavor text speaks specifically about snow creatures, the thought behind it can apply to other permanents as well. There are two basic ways in which something can become “Snow.”

Let’s have a peek at some of Coldsnap’s snow stuff and see how they fit into these two categories. Let’s start with the guy who brought us the flavor text above, Boreal Druid.

What else did Heidar and friends twist into snow minions? Rimescale Dragon, Blizzard Specter, Zombie Musher, Rimebound Dead. In fact, you can read about the creation of Rimebound Dead right on their own flavor text:

“Tresserhorn is ours now. Dredge the lake and bring me all the bones you find. We’ll build you a new army, the likes of which Terisiare has never seen.”
—Heidar, Rimewind master, to Haakon 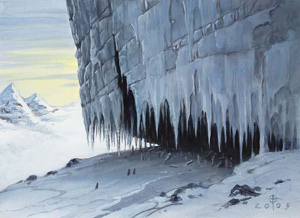 This brings up the subject of Rimewind-twisted lands. If you look back up to the paragraph about naturally “snow” lands, you’ll see that Tresserhorn Sinks is conspicuously missing. That’s because Heidar sunk his clutches in there in order to help create Haakon’s army (and to butter him up and gain access to Tresserhorn’s secret dungeon library)! The Sinks are not the only land to be turned by the Rimewind. Mouth of Ronom and Scrying Sheets were also infused with the essence of cryomancy. The Scrying Sheets were created specifically for divining purposes, but the Mouth of Ronom was a pre-existing landform that just needed a little magical nudge to turn it into a great icy killing jaw. You know, Heidar is a wacko, but he does have some pretty cool ideas.

I encourage you to have a spin through Coldsnap and theorize about how the other snow cards got their flakes. In all, there are 46 snow cards in the set. Buried in the cards and in the supporting Coldsnap story material are the answers for each of these cards. What we do not have, however, are answers to why some non-snow cards are not snow cards. Even before the Rimewind wizards started flinging their icy spells all over the continent, Terisiare had experienced 2000 years of unending bitter winter. That is plenty of time for creatures and lands to start adapting and evolving to “snow.” Just for kicks, here are some of the cards I think should be reverse-engineered to be snow. We will call this “Cavotta-Errata.” (The term, ironically, not coined by me. It’s a Doug Beyer special that I will continue to use as long as Vorthos is alive in my soul.)

While we’re at it, let’s just see what else might have been snow - if Heidar decided to get cranky ten years earlier:

Okay, I need another hot chocolate. My mitts are frozen and, well, anytime is a good time for chocolate. See you next week.