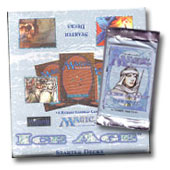 Released in June 1995, Ice Age was the most anticipated set of the era. The first true stand-alone expansion (383 cards), this set is compatible with the basic game, but also contains enough basic land and basic spells to be playable without additional cards.

Mechanics introduced in Ice Age include:

ce Age continues the story of Terisiare, the setting for the conflict in Antiquities.

Thousands of years after the explosion at Argoth ended the Brothers' War, a severe Ice Age has descended over Dominaria, changing the face of the land and reducing the civilizations of Terisiare to scattered tribes. The strong have turned to barbarism. The weak have died. Their struggle is against more than the snow: the people of Kjeldor must battle against the mighty necromancer Lim-Dûl, and his demon lords Leshrac and Tevash Szat. 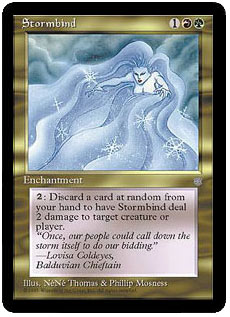