The Innistrad Championship is underway now! With members of the Magic Pro League and the Magic Rivals League as well as top players from qualifying events held on MTG Arena and Magic Online, they battle for $450,000 in prizes in both Standard and Historic formats live December 3–5 at twitch.tv/magic.

You can find the Innistrad Championship decklists online now, with examples of every archetype included below to see what's being played across the tournament. This article covers Historic, but the Standard breakdown has all the same details ready for you.

This article expands on the Innistrad Championship metagame preview, diving into the decklists and analyzing what to expect throughout the weekend. Friday and Saturday feature a combined seven rounds of (best-of-three) Historic. In addition, Sunday's Top 8 double-elimination playoff is exclusively Historic. 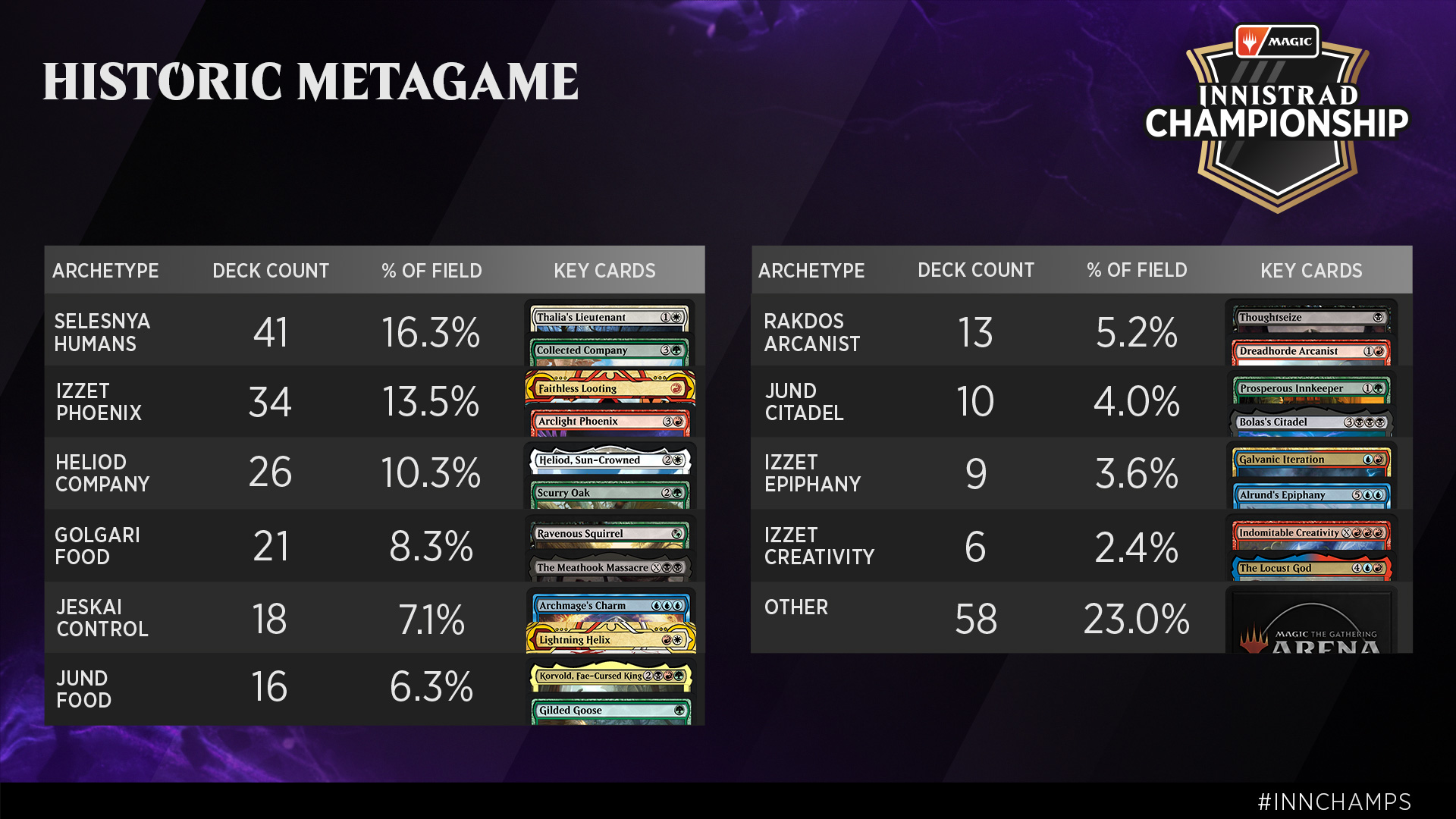 Like Standard, Historic has recently seen the influx of Innistrad: Midnight Hunt and Innistrad: Crimson Vow. But in addition, Historic also saw the release of Jumpstart: Historic Horizons and the suspension of Memory Lapse in the last few months. As a result, the metagame has transformed, and the Innistrad Championship is one of the first major Magic events to showcase for Historic since the start of all these changes.

Looking at the metagame, it's exciting to see a large amount of diversity. The most-played cards overall are Collected Company, Expressive Iteration, Thoughtseize, and Fatal Push, which have been format staples for quite a while. But it's undeniable that the last three sets have reinvigorated the format. Let me give a quick overview of all newly added cards with at least 90 copies across all Historic main decks and sideboards at the Innistrad Championship. (To put that number into perspective: each of these cards is played by at least 10% of the competitors.)

Innistrad: Midnight Hunt' “s most important Historic addition, judging by the total number of copies registered for the Innistrad Championship, was Consider. The cantrip is perfect for Izzet Phoenix as a way to either mill or return Arclight Phoenix. In part due to the introduction of Consider, Izzet Phoenix has become the second-most popular Historic archetype.

Another relevant addition was Brutal Cathar, which has the right mix of creature types, mana value, and disruption to slot right into Selesnya Humans.

Finally, The Meathook Massacre encouraged many Cauldron Familiar afficionados to drop the red and switch to Golgari Food. Red offers Korvold, Fae-Cursed King and Mayhem Devil, but The Meathook Massacre can be just as powerful against opposing creature decks. If things go right, it sweeps their entire board while a huge Ravenous Squirrel on your side survives. Even more importantly, The Meathook Massacre has mana value two, which opens up Lurrus of the Dream-Den as a companion. All Golgari Food decks had Lurrus as their companion, and it's the fourth most-played Historic archetype at the Innistrad Championship.

Voice of the Blessed, the final major addition, could be seen as an upgrade to the already existing Trelasarra, Moon Dancer, but it's usually played in addition rather than instead. Moreover, thanks to Soul Warden, a Heliod Company player can easily put four +1/+1 counters on Voice of the Blessed and fly over for the win, which provides a solid game plan if you don't draw all the combo pieces.

Selesnya Humans (41 players): These decks curve out early with Esper Sentinel into Thalia's Lieutenant and have an awesome collection of three-mana creatures to hit with Collected Company. Elite Spellbinder is a frequently-played one, but it's not a universal inclusion. Roughly a quarter of Selesnya Humans players are experimenting with Innistrad: Crimson Vow's Hamlet Vanguard.

Heliod Company (26 players): When Scurry Oak enters the battlefield, Soul Warden gains a life, which in turn triggers Heliod to put a +1/+1 counter on Scurry Oak. Scurry Oak then creates a token, and you can loop this as often as you like.

4 Trail of Crumbs 4 The Meathook Massacre

Golgari Food (21 players): The trio of Cauldron Familiar, Witch's Oven, and Trail of Crumbs has remained a powerful core ever since the inception of the Historic format. In Golgari Food, they are joined by Ravenous Squirrel and The Meathook Massacre in a low-curve, two-color deck that exploits Lurrus of the Dream-Den as the companion.

2 Mizzix's Mastery 3 Anger of the Gods

Jeskai Control (18 players): Archmage's Charm and Lightning Helix deal with anything the opponent might attempt, and Teferi, Hero of Dominaria will win the game in the end. Slightly over half of the Jeskai Control decks also have the potential to cast Magma Opus from the graveyard with Torrential Gearhulk.

Jund Food (16 players): Most versions have adopted Ravenous Squirrel, but apart from that, decklists look very similar to lists from a year ago. Then again, Gilded Goose ramping into Mayhem Devil and Korvold, Fae-Cursed King is still as strong as ever.

2 Sorin the Mirthless 1 Chandra, Torch of Defiance 2 Leyline of the Void
53 Cards

Rakdos Arcanist (13 players): An ideal curve would start with Thoughtseize, Inquisition of Kozilek, or Unholy Heat on turn one, followed by Dreadhorde Arcanist on turn two. An escaped Kroxa, Titan of Death's Hunger will seal the deal.

Jund Citadel (10 players): When you see Gilded Goose and Mayhem Devil, you might expect Cauldron Familiar or Witch's Oven, but nearly all Jund Citadel players cut the Cat-Oven combo. Instead, their card choices are geared towards ramping into Bolas's Citadel as quickly as possible. Once the artifact is on the battlefield, you can usually cast an absurdly large number of spells from the top without paying their mana cost, while regaining some life with Prosperous Innkeeper.

2 Lier, Disciple of the Drowned

Izzet Epiphany (9 players): If it works in Standard, then why not in Historic? Unexpected Windfall, Galvanic Iteration, Alrund's Epiphany are legal in Historic as well, and it's even better when you can support them with powerful spells like Archmage's Charm.

1 The Locust God 1 Sage of the Falls

1 Sage of the Falls

Izzet Creativity (6 players): Hard Evidence conveniently provides two targets for Indomitable Creativity, and when an Izzet Creativity player casts it for X=2, they should hit the only two creatures in the deck: The Locust God and Sage of Falls. Together, they'll immediately create a game-winning number of 1/1 hasted fliers.

Five-Color Niv-Mizzet (5 players): Pretty much every spell in this deck is multicolored in order to maximize Niv-Mizzet Reborn. The Triome-heavy mana base required to support Niv-Mizzet also supports Territorial Kavu perfectly—a 5/5 on turn two is not out of the question!

Azorius Affinity (5 players): This deck is not as hyper-aggressive as old-school Modern Affinity—the prevalent Historic version is grindier and more interactive—but the name is adequate. Indeed, the deck features the actual affinity mechanic on Thought Monitor, an actual artifact land in Treasure Vault, and a mix between Cranial Plating and Master of Etherium in the form of Nettlecyst.