Of Intros And Feathers

Howdy. My name is Jay Moldenhauer-Salazar and it is my job, every Thursday, to make you tap your lip.

I started playing Magic in 1996 while my wife and I were in graduate school at the University of Michigan. Over the past six years (egads!), I have dabbled in competitive Magic, joined a couple Magic teams, moved to the San Francisco Bay Area, written for a few Magic websites, and made somewhere in the neighborhood of one zillion decks. Really. One zillion. I, um... well, I really like deckbuilding.

My most fun moments in Magic happen before competitive play even starts. I enjoy taking new cards, old cards, good cards, really bad cards, existing formats, made-up formats and mashing things together to see what happens. To me, winning a tournament is not quite as satisfying as seeing my new deck win its first game. Once it has won that game, I often get bored and start working on the next deck.

It might be a sickness. I spend far too much time staring at two cards that just... might... do something cool together, tapping my lip and wondering how I can build a deck to make that “something” happen.

Tapping lips -- it's what this column is about. I want to inspire your creativity for deckbuilding in as many different ways as I can think up. You can play these decks if you want, but I’ll be much more satisfied if you test yourself to make a deck that is more competitive, fun, thematic, etc., than the ones I post here. From time to time, I may even give you a deckbuilding contest to let you showcase your innovative spirit. 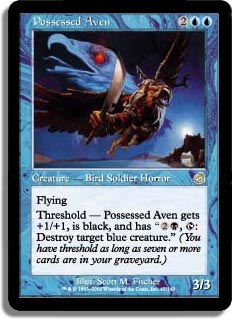 Oh, and the best thing about this column is that I get to show you new cards. Check out Torment’s Possessed Aven.

My first inclination with new sets is to find a few interesting cards and build as many decks around them as possible. I am a firm believer that no card is strictly unplayable, and most cards can be used in multiple ways. To give you an idea of what I mean, here is where my mind immediately went when looking at Possessed Aven. Consider this foray a brief example of what to expect in future weeks...

MEASURING UP THE BIRD

In terms of deckbuilding, what's cool about Possessed Aven? What does it offer as a deck centerpiece?

2) It's a blue card with threshold.

Blue has lots of ways to get cards into the graveyard. That is why, in Odyssey, blue was denied good threshold cards. Here we have a card finally ready to take advantage of blue's graveyard-filling abilities -- a good card that gets significantly better with threshold and that doesn’t cost an arm and a leg to cast.

It's a blue card that kills other creatures... neat! Oh sure, the creature has to be blue (“possessed” apparently means “cannibalistic”), but last I looked, blue spells could easily change the color of opposing permanents.

4) It's a BIRD SOLDIER HORROR!

Whoah. Did you know there has only been one other non-Legend creature to have three creatures types?* This isn't a deckbuilding perk per se, but it sure is intriguing. And slightly confusing.

PUTTING THE BIRD TO WORK

I created my first Standard deck around Possessed Aven using the following reasoning. Again, make your own decks using the card and see where your mind and mine depart.

First, I wanted to achieve threshold quickly and easily to make Possessed Aven meaner. The most obvious choice was Fact or Fiction, which both helps me find my Aven and fills up the graveyard. Careful Study does the same thing, dropping a whopping 3 cards into the graveyard for one mana. And Probe, which is conveniently better with black mana, fills a similar role. Merfolk Looter, Vodalian Merchant and Tolarian Winds were also viable choices.

I realized that Aether Burst is a fun card to include since it gets better the more copies are in the graveyard and I have just established the deck as graveyard-heavy. It is also cheap and saves my Aven, so it went right into the deck.

At this point I felt confident in the deck’s thresholding ability. Now what would I do with a flying Dark Banishing for blue creatures? 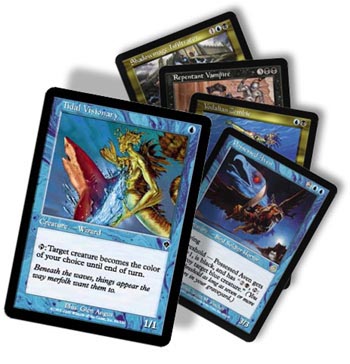 Why, make opposing creatures blue, of course! Tidal Visionary changes creatures’ colors for no mana cost. Metathran Transport does it for

, and has the bonus of being unblockable when opposing creatures are blue. Convenient, no?

Uh oh. At this point I realized the deck was getting weird (read: I was using Tidal Visionary). Oh well, I thought, as long as I’m messing with the color of opposing creatures, I might as well use Vodalian Zombie and Shadowmage Infiltrator, both of which fit my colors and are great creatures on their own. Now Tidal Visionary was looking like more than just an Aven supplement; he was looking pretty darned useful.

I usually start all decks with 23-25 land unless it is obvious the deck needs more or less. So far, the Possessed Aven deck did not look especially mana-hungry or -efficient, which left me with a few extra spots to tie everything together. I decided the deck should have some higher-end threats to compliment the Aven. Since I had the color-changing-goodness theme and was set in blue and black, I opted for Repentant Vampire (who shares some of the Aven’s schizophrenic tendencies) and Crypt Angel. I now had anti-blue, -green and -white cards with little Tidal Visionary sitting in the middle and orchestrating.

Fun stuff, to be sure. But, lo! I didn’t stop there. Below are some other fun ideas to consider with Possessed Aven. Undoubtedly, more Torment cards will be vying to make some or all of these concepts more interesting. Try them out, or better yet look for ways to use Possessed Aven that haven’t even occurred to me.

See you next week, where we’ll talk Torment again and I’ll try my best to give you Nightmares (ominous music).

4 Careful Study 4 Call of the Herd

*: Actually, the other three-type creature is in Odyssey: Aven Windreader. There have been a handful of three-type Legend cards -- the five Elder Dragons (Nicol Bolas and friends); Mirri, Cat Warrior; Lieutenant Kirtar; and Seton, Krosan Protector --but they don’t count since 1) it has always bothered me that “Legend” doesn’t appear in the card’s text box and 2) “Elder” is just a silly creature type.