Is it Live, or Is it Memorex?

I know exactly what I am going to write about. (I think that has happened maybe twice.) Often I rely on theme weeks to lead me toward an interesting topic. Most often, though, I find my inspiration in the email I receive each week. This week is just such a week.

Gabriel sent me an email with his reaction to last week's article, 10, on a Scale of 1 to 5. I got a lot of email regarding this article, mostly just folks taking me to task for leaving out their favorites and for including art that they do not like. (Side note: for the life of me I cannot figure out what people have against D. Alexander Gregory's . Maybe it's just the artist in me, but what I see is an amazing distillation of the human form, the kind of simplicity and grace you don't "try" to get—you either got it or you don't. Trust me folks, he's got it.) Anyway, Gabriel's email was one of the many that had issue with one piece or another, but it raised a subject that I've never really touched upon specifically. Here's some of what he wrote:

I was a big fan of Bradley Williams' art for when it first came out in Mercadian Masques. Although looking at it now it doesn't seem as bold as it did at the time. I still love how it depicts a spell not as a cliched blinding of light and energy but as an actual event, one steeped in the lives and cultural practices of a people in a time of need. The art depicts the spell as a recalling of the planeswalker's journey to Mercadia and his witnessing of the local magic. Drama is in this art. The whole card tells a story and fleshes out the depths of the setting. Which is why I'm so sad to see the art downgraded to what it is in 8th 9th and Xth Edition. A cliched blinding of light and energy.
–Gabriel

Gabriel's email questions something that most Magic fans have always just accepted as one of the game's signature quirks. Gabriel has noticed that magic (and Magic) can be delivered in two different ways: conjured up and straight from the source. In this case, it's that has been delivered to you in two completely different ways.

On the one hand we have Bradley Williams's illustration of a scene in Mercadia in which some Ramosians take part in a traditional story circle ritual, an event in which tales of heroism and history are shared and, through the collective consciousness of all participants, a mystical barrier is created to protect them from the threats described in their stories.

On the other hand we have Aleksi Briclot's illustration of a mage weaving a story circle spell—whirling his arms, generating mystical power, unleashing the magical stuff that will ultimately recreate the effect of the Ramosian traditional story circle.

At the root of it all we have art that shows the inspiration for a spell, and then art that shows that spell being cast. There are those who love to immerse themselves in the story and the world (like Gabriel). These folks would probably prefer to see the inspiration, the full, rich tapestry of characters and events from one plane or another. But then there are those who like Magic art to depict their spells that they use in the battle of mages known as Magic: The Gathering. The good news for all these people is that they will always get some of what they want. The bad news is that no one way is better or more important than the other. In fact, it is incredibly important to the creative team that there is more than one way to depict Magic's spells. First of all, running out hundreds of cards a year all in one particular way would become intensely boring. Secondly, Magic art does not always have the same purpose.

The first thing Magic art has to deliver is the message that Magic is a battle of wits between two or more spell-slinging mages. In order to do this it must, from time to time, come right out and show it, as it is shown in the illustrations done by Aleksi Briclot and Alan Pollack. It is not surprising that, of the three illustrations, these two depict the spell being cast rather than the inspiration for the spell. Both the Briclot and Pollack illustrations were commissioned specifically for a core set. Before anything else, a core set's artistic goal is to communicate basic visual concepts of Magic—wizards are cool, smart, replete with 'tude, and devoid of purple cone hat. They have access to spells that create fire, lightning, protective fields, artifacts, and all sorts of wondrous creatures from tiny evil imps to beautiful warrior angels to terrible fire-breathing dragons. To keep the message simple and easy to digest, core sets will often leave out the extra level of detail. For example, look at the art for . It's pretty plain to see that enemy mages can be toasted with this simple fire spell. But look at the original below. It's a different story altogether—different in that there is story. In an expert-level expansion, Magic has to deliver its message on at least two different levels at the same time. (I say "at least" because I am sure there is some other secret level of which I am not aware.) In addition to continuing to deliver the "you are a powerful mage" message, expert sets must also deliver a whole new world each year, and some storyline to go with it. In order to create a panorama of a new plane, or an old one beset with devastation, a Magic set cannot rely on land and creature cards only. Characters and setting must be shown in the spell cards as well. Instead of just the spell effect showcase, we get specific locations and specific characters in the world. With , one little 3-damage spell shows us the goblins, airships, and great air docks of Mercadia.

In expert sets, spells often act as the "action scenes." Like the Masques , they can show us spell effects and local color. But expert-level spells can go one step beyond that, into the territory that our old friend Gabriel loves to tread. Sometimes a card is best depicted in, for lack of better terminology, its natural habitat. Planes throughout the Magic multiverse are riddled with mages and magic spells, but they are also full of natural phenomena and everyday occurrences of the unexplained. These phenomena

often go on to become the spells of plane-hopping spell-slingers like you and me. I describe how this happens in my article, Spelling It Out. I encourage you to read it if you have not already, because I am not going to get down and dirty into that subject again today. Let's just say that planeswalkers see mighty things, like the hiding deep beneath the snowy surface of Terisiare, or the exemplified by Boros tacticians, or the great gnarr stampedes rumbling across Dominaria as they . In each case we get to see the au naturale view of phenomena that were later assimilated into spells for you and I to cast. This way, we get the biggest bang for our buck with regard to building the panorama of a new world. If we were to see the spell effects on these cards instead, we might see a wizard grinning diabolically as he accesses the ancient lore locked within the glowing inscriptions that float in the air above his outstretched hands. This wizard could look like anything and be anywhere. This is what it might look like when is cast. One thing is for certain—you, out on the field doing battle with another mage, are not transported to the sheets of ice buried deep beneath the snowy surface of Terisiare. You stay where you are and you do battle. Your spell might recreate a magical sheet of ice complete with etchings and a thin connection to Phyrexian madness. It might just simulate the effect of the etchings without much visual fanfare at all. The particular flair of a spell is largely up to its caster. I would imagine that Vorthos's spell would recreate as much of the frigid scene as possible. Spike, on the other hand, would be happy to just squeak out the effect without the dog and pony show. Whichever way it goes down, it's a recreation and not quite as full of information as the real thing.

You can find this sort of card in just about every Magic set, the kind that is not really showing a spell, but rather a phenomenon that a spell might simulate. They usually march out with all the rest of the cards and go about their business without being questioned. I suggest you have a flip through your binder to hunt down and identify some of these spells. Then ask yourself, if I cast this spell, what will it look like? What will happen? What happens when you cast ? Your vanilla dudes get big. Anything else? Do the petroglyphs appear before you? Maybe I need the glyphs to create the magic. Somehow I don't think I'd need a big hunk of rock.

So you're fresh off of a trip to Ravnica and you witnessed the power of the Orzhov and their oppressive Conjurer's Ban. So you form that power into a spell, call it Conjurer's Ban, and cast it on your in-laws. What happens? Do the Orzhov guiltwardens appear? Does you mother-in-law hand you all of her impure thoughts all bundled up in a golden sphere? Do you recoil at the thought of your mother-in-law's impure thoughts? 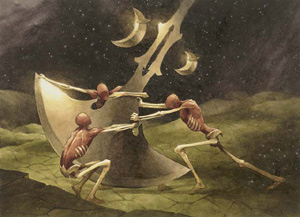 So you want to , do you? Does a troupe of skinless skeletoids accompany you on your walk? Do you actually walk? If you had to explain to someone completely new to Magic, to your mother-in-law, what is happening when is cast, how would you do it?

It's not that easy. Sure, it's a piece of cake to show the effect of . But "take an extra turn" is not so easy to explain. Sometimes Creative needs to be able to depict a spell in a way that does not just plain show it. Sometimes it's just not clear what to show. Perhaps this reveals a third level of communication within Magic art. It's the level of visual communication that says "We know you're smart. We know you will 'get' this." Magic art, like Magic names, flavor text, and stories, is not afraid to step outside of the plain-spoken (Ninth Edition ), away from the embellished (), and into the world of suggestion / abstraction (.) With these cards it's anybody's guess as to what the spells look like once they're cast. A duel takes place in your imagination, so I guess you get to decide how comes out. Now that we're going this way, how about telling me what happens when you cast this spell: