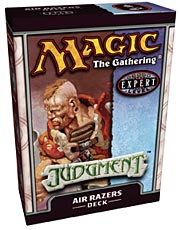 he "Air Razers" deck has a simple philosophy: Whatever it can't fly over, it burns out of the way. The deck comes equipped with fliers, fliers, and more fliers, plus a healthy amount of red direct damage. This deck wins quickly and viciously.

Your basic strategy is to use your mana at the start of the game to put out creatures with flying, even if you're taking some early damage. You'll need to get your Aven air force up and running as soon as possible. Then use your burn spells to clear a path for your fliers or to deal those last few points of damage to your opponent. Blue card-drawing spells like Concentrate and Flash of Insight will refill your hand and get you to your good cards faster.

With the card-filtering effects of Compulsion and Hapless Researcher, "Air Razers" takes full advantage of the Torment set's madness mechanic. Discard either Fiery Temper or Violent Eruption to activate Compulsion's ability and you can play it for its madness cost—and draw a card from Compulsion. And since the deck needs only six or seven lands in play, you can use Compulsion to turn your excess lands into extra cards, too.

The key to winning with this deck is to keep your opponents from blocking your attackers. Shower of Coals and Swelter each take out multiple creatures in one shot, and Shower of Coals gets even better when you reach threshold. Churning Eddy returns a creature to its owner's hand and bounces a land as well. You'll be able to outrace your opponents in the air while they helplessly replay the same creature over and over.

A few Judgment cards can cause problems for the "Air Razers" deck. Anurid Swarmsnapper, for example, is a 1/4 green creature that can block fliers, and the Phantom creatures have a built-in resistance to burn spells. Adding another Churning Eddy or two and some other "bounce" spells, like the Odyssey set's Æther Burst, should get those problem creatures off the table long enough for your attackers to get through. You can also swap some of the Lava Darts or more expensive burn spells for a few Odyssey Firebolts.

Have fun flying the not-so-friendly skies! 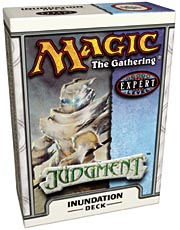 heap white creatures and more cheap white creatures have always been a winning combination, and the "Inundation" deck is no exception to the rule. You should play your creatures as quickly as possible and attack early and often. With this deck, you have to play aggressively. Attack when you can, defend when you must. You may lose a creature or two when you attack, but keep up the assault as long as you can deal damage to your opponent. The first to deal 20 damage wins, and this deck does that faster than most.

Even if your opponent manages to set up a defense, this deck still has some effective weapons. Creatures with flying can often get through for the last few points of damage, and protection from creatures makes Beloved Chaplain and Commander Eesha impossible to block. Battle Screech gives you lots of 1/1 flying Birds in a hurry. After you play it once, you can tap your two new Birds and another creature to play it again with flashback. And with the enchantment Unquestioned Authority, you can give your best creature protection from creatures and draw a card in the process.

The deck also has some tricks to save your creatures again and again. Shelter and Benevolent Bodyguard can each rescue a creature from imminent destruction by giving it protection from the color of your choice. Prismatic Strands is even more versatile. If your opponent attacks you with a bunch of creatures, expecting to win, you can use Prismatic Strands to save yourself and then win with a counterattack. You can use protection effects to get an attacker through, too: If all available blockers are the same color, give your creature protection from that color. Your opponent won't be able to block.

Most decks that rely on small creatures have problems with cards that can get rid of multiple creatures at once, and the Odyssey block is full of cards that can really ruin your day. Adding more Prismatic Strands and Shelters will help the deck against spells like Shower of Coals and Swelter. If you're worried about other mass-removal spells, like Kirtar's Wrath, you may want to splash green for the Judgment cards Genesis and Nantuko Monastery. 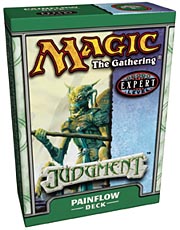 f you like big, fat monsters, then this is the deck for you. Ten cards in the "Painflow" deck provide 5/5 or 6/6 creatures. Thriss, Nantuko Primus can even give a buddy +5/+5 for a turn. Give a creature with trample a boost and stomp your opponent into a bloody pulp. Crush of Wurms can put three 6/6 Wurms into play - the most power and toughness ever produced at one time by a single card - twice! After a few behemoths get into play, it'll be time to show off your victory dance.

The deck may not explode out of the gates, but your goal at the beginning of the game is just to get lands into play. Don't worry if you take a little early damage. Spend your mana putting out Werebears and fetching lands with Deep Reconnaissance. Here's a nice trick for the early game: You can play Diligent Farmhand and then wait to use its ability until it blocks an attacking creature. You'll slow your opponent's assault and get set up for your own at the same time. After you get six lands into play, the fatties will just keep coming out.

Most of the time, you'll be able to overwhelm your opponent's defenses, but you do have a few tricks in reserve. Sudden Strength is a nice surprise, and Seton's Desire can end a standoff quickly if you're at threshold. Just play it on your smallest creature and then attack with everything.

Decks full of fatties sometimes have problems against decks full of really cheap, fast weenies. If your opponent builds up a large army early, you could take a painful amount of damage before your bigger creatures come out to play. Moment's Peace solves that problem, holding off the assault for a couple of turns while you play your monsters.

You could add mountains and some direct damage spells to the "Painflow" deck to make it even better against decks with small creatures, but the deck's true Achilles' heel is blue countermagic. Since your creatures are so expensive and the deck doesn't win quickly, blue counterspells and card drawing can really ruin your day. You might want to use the Judgment card Seedtime to teach those control freaks a lesson. 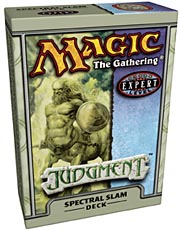 o you hate losing your creatures in combat? Does the thought of a single direct damage spell sweeping away the troops you spent so long building up keep you awake at night? Then the Judgment set has the creatures for you! Meet the Phantoms, a new race of creatures with built-in damage prevention abilities. Their ghostly powers will have your opponents fleeing in fear.

While you're playing the "Spectral Slam" deck, you need to dump everything in your hand onto the table as quickly as you can and then keep attacking. But the key to the deck's long-term success will be keeping your Phantoms around after they run out of +1/+1 counters. If you can boost their toughness with cards like Mirari's Wake and Blessed Orator, the Phantoms are practically indestructible. Creature enchantments like Strength of Isolation and Seton's Desire give a Phantom the extra power it needs to keep attacking. And Elephant Guide is simply amazing. Even if your opponent manages to destroy the creature it's enchanting, you'll still have a 3/3 Elephant token.

Remember, you only remove a +1/+1 counter from a Phantom if its own ability prevents damage to it. If you use the ability of a Hallowed Healer or Benevolent Bodyguard to prevent all damage that would be dealt to a Phantom, you don't have to remove a counter.

Sometimes you'll wind up in a situation where neither you nor your opponent can get through for damage on the ground. Since this deck has only a few creatures with flying, you may have to switch to a new plan: Get to threshold and then enchant one of your creatures with Seton's Desire. All your opponent's creatures will have to block it, so the rest will get through to deliver the finishing blow. You can also wait and build up +1/+1 counters on your Phantom Nantuko. Not many decks can withstand a gigantic trampling Phantom for long.

To make "Spectral Slam" even better, you can add lands that produce both green and white mana, like the Odyssey set's Sungrass Prairie. More damage prevention spells, such as Prismatic Strands, will keep your Phantoms at full health longer. And adding an anti-flying card like Hurricane (from the Seventh Edition set) will rid the battlefield of those pesky fliers.