It's Wedding Season, and a few eager pairs of Tenth Edition cards were simply made for each other...

that love in the air? I hope so. I can't really tell because of these paint fumes. Either way, I'm feeling a little light-headed. As many of you are well aware, it's summer time so Wedding Season is fully underway in my neck of the woods. It coincides with Kitchen Cabinet Painting Season, apparently. I bring this up because I spent this past weekend attending the wedding of my friend Greg (who you might remember as the Teroh's Faithful lover from my Reject Rare Draft articles) and his lovely wife Sarah.

As I've mentioned before, my gaming group is unfortunately spread over the province, but we still manage to meet up every few months for an intense weekend of Magic: The Gathering, sleep deprivation, and an embarrassing amount of Sneak King. We usually play some kind of tournament (Reject Rare Draft, Highlander, plain-old whatever's-recent booster draft) to give the weekend some structure. To add a little something extra to the proceedings, to sharpen everyone's competitive instincts, we usually establish some kind of prize payout. At our last get together, we played a little Time Spiral Sealed Deck, but to keep costs down, we decided that we wouldn't play for prizes. I know, it goes against everything kitchen table Magic is supposed to be about. Bragging rights just aren't enough, since we all talk a bit of trash anyway and without permission! 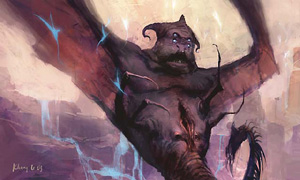 We eventually decided that we would need some stakes after all, and since we knew Greg was getting hitched soon, everyone (except Greg, I guess) agreed that the winner of the tournament would get to choose the name for Greg's first-born child. No prize money, no Pro points. It's kind of like the Magic Invitational, except you really get to screw over your friend. For a number of reasons, I offered up Eron... the Relentless! (all punctuation included). Good for a boy, girl, or Legendary Rogue, I think. With little prompting, Greg himself suggested Kaervek the Hairless, but noted that he would have to run it by Sarah first. Two of the other guys, Justin and Will, put their heads together and came up with [Something Really Offensive] Jr., which strongly suggested that Greg was [Something Really Offensive].

In the end, despite some possible collusion among his opponents, some Tim Donaghy-style refereeing, and the undeniable appeal of having a child named [Something Really Offensive] Jr., Greg won the event and crushed all of our dreams. So Kaervek the Hairless it is (pending approval).

With an assist from my friends Todd and Will, and in the spirit of Kitchen Cabinet Painting Season (or Wedding Season), I'm going to take a look at some other creatures that were meant to be together.

Since X Week was too short, and since I really like the idea of the Tenth Edition Super Limited League that Aaron wrote about last Friday, I'm going to limit myself to creatures from Tenth. Heck, I might even flesh out some of these creature combos, but when I do, it'll be with cards from the latest core set.

Obviously, because it can return permanents you control to their owner's hand, the Mastermind combos with any creature that has a nice comes-into-play ability. I picked Treasure Hunter over cards like Nekrataal, Highway Robber, or Sage Owl because it's a fresh addition to the Core Set and because I feel bad that the intrepid archaeologist was left out of Odyssey. You see, in that set, there was a cycle of creatures that return something from your graveyard to your hand. Reprints Scrivener, Anarchist, Cartographer, and Gravedigger were joined by total noob Auramancer and not Treasure Hunter (or, I guess, Monk Idealist). Maybe now he'll get his day in the sun.

Of course, these two cards don't do a heck of a lot on their own. You need some artifacts in your graveyard to maximize their effectiveness. Luckily, there are a few artifacts in Tenth that you sacrifice for a profit, such as Chromatic Star (draw a card!), Mind Stone (draw a card!), Bottle Gnomes (gain life!), and Composite Golem (add

to your mana pool!). Treasure Hunter is also fine if you're just using him like a Gravedigger to return a fallen artifact creature like Razormane Masticore or Juggernaut.

Besides working well with creatures with comes-into-play abilities, Vedalken Mastermind can also team up with creatures with a short lifespan, i.e. creatures that make you sacrifice them at some point in the game. Fog Elemental is a seriously undercosted 4/4 flyer, with the catch being that you have to sacrifice it if ever gets involved in combat. With Vedalken Mastermind on the table, you can attack with your Fog Elemental, have him deal his damage, then bounce him before "end of combat." For

per turn, you can have the sideways face play offense and defense. You can perform similar self-destruction-dodging tricks with Vedalken Mastermind and either Spark Elemental or Loyal Sentry.

As someone who used to play with Dragon Whelps and Dwarven Warriors, I have a bit of a soft spot for Crafty Pathmage. It makes creatures with power 2 or less unblockable until end of turn, and there are at least two good ways to take advantage of this. The first is to use creatures with a low initial power that can pump themselves up somehow. Creatures like Looming Shade, Nantuko Husk, and Furnace Whelps all fit in this category, starting out small, but capable of doing large amounts of combat damage. The second way to take advantage of Crafty Pathmage is to combine it with creatures that do devastating things when they deal combat damage to your opponent. A hit from a Scalpelexis is perhaps the most devastating of them all, but there are still plenty of other creatures that are worth looking at (which I will get to shortly).

Puppeteer is just fine on its own. It can tap down opposing blockers or give your creatures a makeshift vigilance, allowing them to both attack and block. Of course, it's doubly exciting when you pair it with a creature that has a powerful tap ability. I picked Kamahl, Pit Fighter, but it could have just as easily have been Arcanis the Omnipotent. But why not use both? For example, you could build something along these lines:

Almost every creature in the deck taps for some effect. The ones that don't turn sideways to ping or draw you cards make great targets for Arcane Teachings (especially Horseshoe Crab).

Colossus of Sardia is a huge lumbering beast that requires a constant influx of energy to keep it primed and ready to attack. He doesn't untap in the usual way, so if you send him into the Red Zone, you'll need to invest another nine mana to get him to go back there a second time. Who's got nine mana to spare? Not me. That's why I thought I'd turn to Seedborn Muse, who untaps the Colossus for free during your opponent's untap step. You could just as easily use Puppeteer again, but I figured that putting the Colossus in a green deck makes more sense. This way, your Plan B (untapping the Colossus with actual mana) is much more feasible.

Besides saving you mana with Colossus of Sardia, Seedborn Muse forms a very powerful trio with Elvish Piper and Citanul Flute, allowing you to put a creature from your library into play during each player's turn. Here's a sample decklist:

Scion of the Wild + Siege-Gang Commander

This one is pretty straightforward. Scion of the Wild's power and toughness are determined by the number of creatures you control. Siege-Gang Commander produces four creatures with a single card. It's like the old Keldon Warlord + Thallids team-up, but in reverse.

Like Vedalken Mastermind, Stampeding Wildebeests is best friends with creatures like Kavu Climber that do things when they come into play. In fact, they love each other so much that some are questioning why they don't just get married. One of that "some" is me, so I should probably put them in the same decklist, which is a sign of true commitment. Of all the green comes-into-play creatures, I picked Kavu Climber, because the rest of the good ones in Tenth are elves and I didn't want to build another elf deck. You know, like this one:

One of my favourite cards ever is Llanowar Sentinels, so I was delighted to see that it was joining the core set. It's a card that I haven't played with too much recently, since almost all of my decks currently in circulation are Highlander (or Elder Dragon Highlander), but now that I can re-pair it with Overrun (in Standard, no less) I'll be giving the team much more play.

When I was looking for creatures to "marry" to Cephalid Constable, I figured I'd end up finding something green. After all, green is the main colour of creature-pumping effects, and the Constable likes nothing more than to have its power pumped up. It turns out that green didn't have any creatures that would do the trick (although it has plenty of spells that would), but I was very excited to find Hate Weaver.

As I mentioned above, Crafty Pathmage is best with either creatures that can be pumped up or with creatures that do something brutal went they connect with your opponent. Well, with Cephalid Constable and Hate Weaver, you can have both. Just make the Constable unblockable, pump it with the Weaver, and bounce a bunch of permanents.

Hate Weaver is also good with cheap evasive creatures like Cloud Sprite, Cloud Elemental, and Thieving Magpie (which is also good with Crafty Pathmage). Cephalid Constable, meanwhile, can be supplemented with more bounce (like Unsummon and Boomerang) or with discard (like Hypnotic Specter). Add it all up and you might get something like this:

Update of the People

There is still one week to go in the Auction of the People deckbuilding challenge! For more information about this exciting opportunity to build a deck for this year's Magic Invitational, check out either of my two previous articles: here and here.

Read the rules, build your deck, and send it to me before August 8. Good luck!

Until next time, have fun naming things.