id you see the Scars of Mirrodin card that Mike Flores previewed yesterday? It was Koth of the Hammer, and it looks like this: 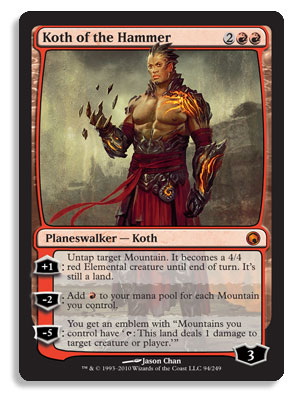 This generated a certain amount of discussion in the Twitterverse. Much of it was Flores himself (@fivewithflores) arguing with Conley Woods (@Conley81) about how good Koth actually is. The winner of that discussion remains to be seen, and we're going to skip it.

The other discussion was who could come up with the best Koth-related pun. Here, as far as we can determine, are the contenders.

Top8Games I am bracing myself for the Koth puns -- High Koth of Living, Koth of Doing Business, Opportunity Koth and so on.

dantack Turn your head and Koth!

cdstocker One of my favorite bands used to be Soul Koth'ing

allanhowls I am drawn to the new planeswalker like a Koth to a flame. #SoM