ello and welcome back to the Lab! This week, as terribly non-theme as it is, I've decided to dedicate my thoughts and words to the soon to be rotated Alara block (made up of Shards of Alara, Conflux, and Alara Reborn.) It seems crazy that it's already time to say goodbye to the most triple colored of all the blocks in Magic history, but I guess every block eventually goes. I've made it an unofficial goal of mine to bid farewell to each block as it passes out of Standard, having paid tribute to Lorwyn, Shadowmoor, and Coldsnap similarly in the past. I even summed up Time Spiral block early on with a neat riff on Riftmarked Knight. 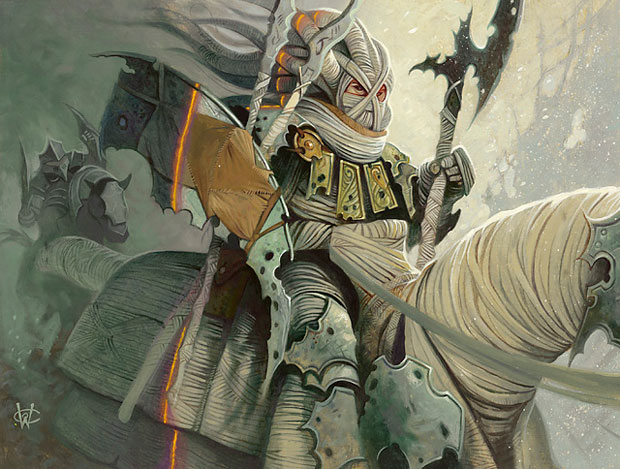 And now, I'm going to do the same with Alara Block. I realize I'm a tad early on this front then I have been in the past, but Scars of Mirrodin is really creeping on the horizon and such horizon-creeping makes me both excited and nervous that I may have missed something from Alara.

So here we go, starting with the first set of the block and proceeding to the last. There is a deck for each set, with some additional comments on cards that catch my fancy (although I don't recall throwing my fancy anywhere in the first place ... is that you, Memory Erosion?)

Saying Goodbye is Shards to Do

Shards of Alara was, I thought, a great idea for both a set and a block. Aligning the five sets of allied colors into different settings must have taken an immense amount of creative thinking and artistic direction, and I hereby applaud those responsible for such things. Oh yeah, and the cards were crazy. I remember scanning the spoiler, with my brain already reeling from such Shadowmoor cards as Wilt-Leaf Cavaliers and Boggart Ram-Gang, and falling out of my chair at a cycle of amazing three-color, three-drop (and four-drop) creatures. Woolly Thoctar and Rhox War Monk pretty much blew my mind.

Archdemon of Unx definitely slipped through the cracks as far as competitive rares went, but I can surely envision pairing the big Demon with Reassembling Skeleton (not a Zombie!) And speaking of my favorite new Skeleton, Death Baron just got an instant four-of to go with it in any dedicated Skeleton tribal deck.

Immortal Coil was last seen being given away by Puca's Mischief and exploited with Relic of Progenitus. Nowadays, we have a Standard (and quite faster) version of that combo. Use Bazaar Trader to give the Coil to your opponent, and follow it up with an uncounterable, manaless Bojuka Bog. Death by Bog!

And now we get to our deck, based around an unfairly forgotten Grixis legend. Sedris, the Traitor King was, I thought, destined to become the king of various graveyard-based casual creature decks. Somehow, it acquired a different, more boring destiny, that of being forgotten in the back of binders worldwide. I'm here to excavate, reveal, or (if I must) unearth it from that dusty dungeon. Yep.

A fun, casual Sedris deck doesn't have to be too complicated or combo frenzied. In my mind, all we need to do is land Sedris onto the battlefield unharmed, through creature-based resources. "Enters the battlefield" and "leave the battlefield" creatures should be staples. 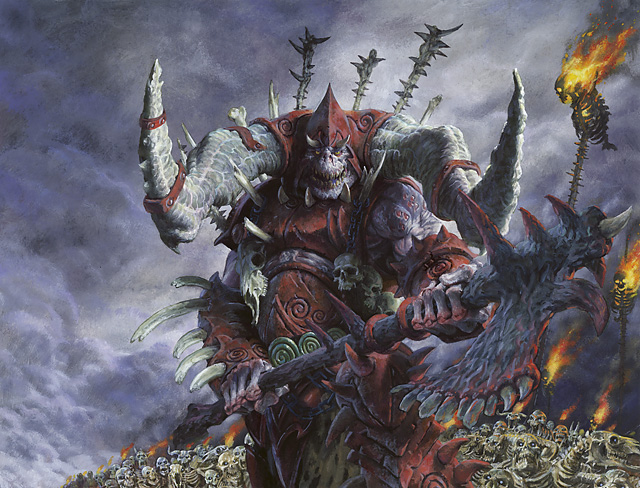 I looked up some unearth tricks that I had forgotten since prematurely dismissing the mechanic about a year ago. Any unearthed creature will be exiled if it were to leave play ... unless the spell that's removing it is also exiling it. Let's say I have both Supreme Exemplar and Mulldrifter in my graveyard. If I unearth Mulldrifter, and then the Exemplar (with Sedris) I can champion the 'Drifter and swing with my flying 10/10. When the Exemplar's unearth trigger exiles it, my 'Drifter will come back as a normal Mulldrifter!

A cool trick that I enjoy with unearth involves one of my favorite corner case cards, Pull from Eternity. Unearth a creature normally, and on your next turn, cast the Time Spiral instant on that card. It'll wind up in your graveyard, ready to be unearthed again. It's a one off, so no true craziness, but it's still fun to find loopholes.

With all this in mind, here's my attempt at a straightforward Sedris deck.


Yeah, that's Leyline of Anticipation kicking around there. Playing Sedris on the end of your opponent's turn gives you a surprise turn of unearthing fun. I contemplated including actual creatures with unearth, but with a higher cost than

(Kederekt Leviathan and Hell's Thunder come to mind) but ultimately I wanted to rely on Sedris a bit more.

The Signets and the Solemn Simulacrums help propel you to Sedris mana. Unearthing Titans is amazing fun, as well as various evokers. Looter il-Kor can get these creatures into the graveyard if necessary. Overall, this is a four-color Sedris deck focused on unearthing things and having fun!

Alright, Conflux! Despite my enthusiasm for Shards' flavor, Conflux was actually my favorite set of the block. This is due in part to the return of domain, or at least the introduction of domain as an ability word. The "domain deck" picked up some mainstays from this set, from Exploding Borders to Spore Burst to Drag Down. Appropriately in a domain set, Conflux also carried a five-color theme, seen in the underrated Dragonsoul Knight and the powerful Child of Alara, as well as the sunburst staple Kaleidostone.

In response to last week's Verdant Void deck, reader Guy Buckridge wrote in to express his shock at my statement "... and Charnelhoard Wurm, a fun Jund Wurm that I apparently haven't used yet." Guy wrote:

"What do you mean, you've never done a Wurm deck! Are you kidding me?! Listen very carefully: Charnelhoard Wurm plus Soul's Fire is easily one of the funniest things I've done in Standard. You must try it." 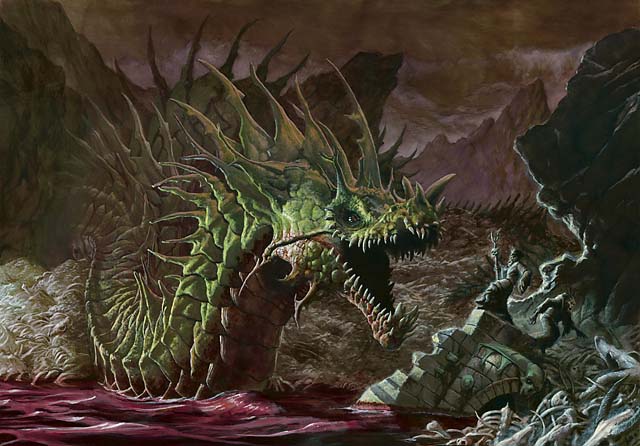 Wow, that's pretty damn cool. With the Wurm on the battlefield, cast Soul's Fire targeting the Wurm and your opponent. The Wurm will deal 6 damage to your opponent, and since it did, its ability will trigger. By this time the Soul's Fire is already in your graveyard, so you can return it to your hand. Voila, a "

Of course, that engine would require

to kill your opponent in one turn. If Charnelhoard Wurm's power was, say, 10, you'd only need two Soul's Fires (

.) To pump up my Wurm, I went with fellow back-of-the-binder Mighty Emergence. One Emergence on the battlefield results in an 8/8 Wurm (three Soul's Fires), and two gets us to the magical 10/10 level.

Another pumper I went with was Bear Umbra, which has the side effect of having totem armor to protect my Wurm. And if you attack, you can untap all your lands and start funneling instant speed Soul's Fires right then and there!

I wanted Soul's Fire to be as versatile as possible, so I used a smattering of 5 power creatures (which lets Mighty Emergence do its job.) Rage Nimbus is a nifty guy; It'll be a 7/5 after Emerging Mightily, and can basically pick off opposing creatures with its activated ability. If you're worried the 7 power will go to waste, that's what Soul's Fire is for! Spellbreaker Behemoth, meanwhile, is pretty broken, plus I've never used it. Summit Apes are a lot more frightening with the Emergence on the battlefield.

Alara Reborn holds the unique distinction of being the only set with 100% gold (multicolored) cards. It also introduced the wonderful cascade (led by torchbearer Bloodbraid Elf) and used a bit of hybrid here and there. Lorescale Coatl is a new Johnny classic, and Wall of Denial is possibly the best Wall ever for multiple-card combo decks. 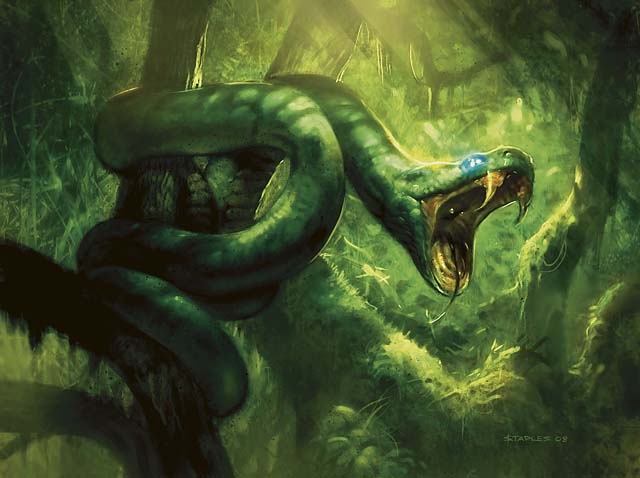 My card for this section is the woefully underappreciated Sages of the Anima. Let's examine this Elf Wizard (these Elf Wizards?) for a second. Whenever you would draw a card, you'll reveal the top three cards and put any creatures into your hand, while flushing the rest to the bottom. This means you won't be drawing any non-creature cards for as long as the Sages are around. It also means Lorescale Coatl is not a super combo with the Sages, as you aren't technically 'drawing' anymore.

Naturally, to maximize this effect, the Sages work well in a creature heavy deck. Getting all three of the revealed cards is the goal. So I paired the Sages with their new best friend, Aeon Chronicler.

Think about it. Suspending the Chronicler for two after casting the Sages means you're getting another draw (which becomes another reveal three), and when it hits the board, it'll presumably be huge. Overbeing of Myth is another perfect fit, drawing extra cards and swelling equally.

My win condition is swinging with these fatties, with the help of Voyager Drake. Ramping up to them should be my goal for the early game. Thus, I went with mana-creatures, such as Sakura-Tribe Elder, Noble Hierarch, and others.

Creature abilities that draw multiple cards, such as Sphinx of Lost Truths or Riptide Survivor, can go nuts with the Sages on the board. Fathom Seer (Aeon Chronicler's right hand man) can activate the turn you cast the Sages! Reliquary Tower can keep your hand loaded.

Sages for the Aeons

4 Sages of the Anima 3 Overbeing of Myth


This is simply a creature packed deck that likes to ramp into powerful things. I like some of my utility choices, like Æther Adept (bounce is always great) and Loaming Shaman (reload my library with fallen creatures!).

A few weeks ago, I ran a poll asking which of three contests you wanted me to run. (Check out that article to see more about the contests.) Here are the results:

Check back in a future article for details!