elcome back to the Lab! I like to write about kooky ways to play and think about Magic on Thursdays, and today's theme is especially exciting. Adventure Week is such a gloriously open-ended theme week that I originally was planning one of what I like to call my "out-there" columns. (Some examples of these would be my two-part saga of Bob from Accounting (Part 1, Part 2), and my Exiled Week column last year, which were in fact quite adventure-themed.) I eventually decided that, after a couple weeks dedicated to my Planeswalker Contest, I really needed to sink my teeth into some Worldwake cards before it was too late. And by "too late," I mean the ever-advancing Rise of the Eldrazi, official previews for which begin March 29.

I had to give this column a title somehow, and referencing one of my favorite films of last year, Zombieland, while also referring to the plane of Zendikar seemed the best option. Now, a fitting synonym for adventure is quest. And quests just happen to be a major theme of Zendikar block. Last year, I covered interesting deck-building strategies for the quests of Zendikar, and today I think I'll do the same for the quests of Worldwake. These four quests, unlike their Zendikar counterparts, aren't bound to a cyclical format, and thus are quite different from each other. One cares about creature types on the way in, another cares about them on the way out, while the other two are interesting variations on casual archetype staples. Let's start the adventure!

Can I just quickly gush for a paragraph on the art for Quest for Renewal? Something about that winding path amidst the green static of trees, the light blossoming from under a branch, and the figure's posture combines to completely envelop me. 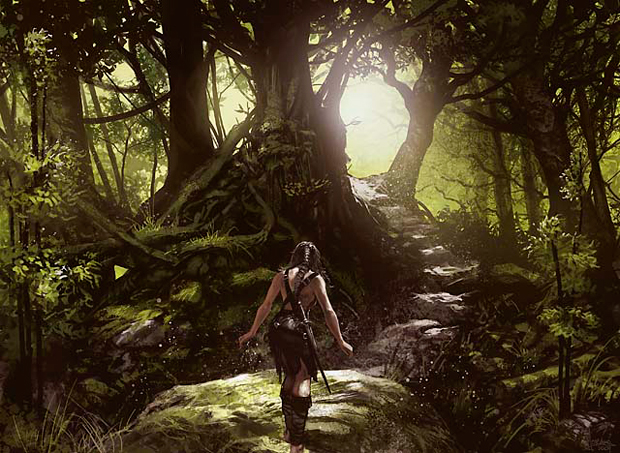 Okay, onto possible card interactions. Quest for Renewal reminds me of Seedborn Muse, which itself is a homage to Awakening, but managed to become far more recognized, both by untapping all permanents and by affecting only your permanents. Quest for Renewal is much cheaper than either of those cards, but it affects only creatures you control.

To amp up this Quest, we need it to notice your tapping of a creature for some effect four times. Creatures tap for all sorts of things, like mana (Birds of Paradise), life (Oracle of Nectars), cards (Archivist), or even creatures (Godsire.) Godsire in particular seems super with a fully loaded Quest for Renewal on the battlefield as well. A casual Standard deck could probably be built around this interaction, using the very underused Behemoth's Herald and other cheap creatures like Knotvine Mystic or Naya Hushblade (both of which are red, green, and white for the Herald.)

However, I'm particularly drawn to the all-Worldwake combo of Quest for Renewal and Scrib Nibblers. The Nibblers untap like crazy anyway, so alongside some other creature-tappers it shouldn't be a problem amping up Quest for Renewal. Once you've accumulated four counters, Scrib Nibblers can successfully do its thing every turn, yours or otherwise.

Getting lands on top of your opponent's library isn't too tricky. Fallow Earth, Plow Under, and Primal Command can do it. However, since we're already in black, I'd like to use a classic overlooked rare from ages past: Volrath's Dungeon. Alongside Scrib Nibblers, your opponent's decision becomes, "Do I allow my threat card to be exiled, or do I let you gain a life and lose my land?" And that's assuming there's a land in your opponent's hand!

Elves of Deep Shadow provide mana and tapping, while Deep Reconnaissance can find lands to untap the Nibblers (and it can be flashbacked after being discarded to Volrath's Dungeon.) Clear the Land is a gutsy combo with Scrib Nibblers. If fate works in your favor, you can clear more land than ever!

Yes, those are Tainted Monkeys in that list. I figured Scrib Nibblers would need some help milling out an opponent's library, and what better card for this deck then the very tap-happy Monkey? If you choose the right word on occasion, it should help. Sprout Swarm is an instant token-maker that my untapped mana-makers could potentially pay for. I threw some fun singletons in there, including Thousand-Year Elixir, which traditionally plays nice with creature-tappers.

Easily the most straightforward of this quartet of quests, Quest for the Goblin Lord has a clear message: PLAY GOBLINS. I won't make a deck list right here, simply because anyone even remotely acquainted with the speedy Goblin deck should be able to piece one together. I'll just note a couple of things. First, this enchantment counts Goblin tokens (because they enter the battlefield, even though they aren't cast.) So Dragon Fodder, Mogg War Marshal and Siege-Gang Commander can account for two, three, or four quest counters, respectfully. Second, when fully activated, Quest for the Goblin Lord pumps up not only your Goblins, but all your creatures. Thus, your deck doesn't even need to be a Goblin deck to get the bonus. Of course, it would help, but even if the only Goblin-related card in your deck was Rise of the Hobgoblins (red and white weenie?) or Empty the Warrens (creature-based storm!) this Quest can help! 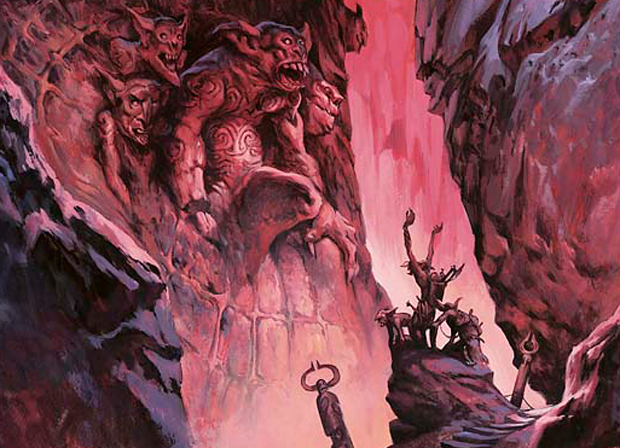 Quest for the Goblin Lord was recently featured in a Daily Deck. That deck was a fun look at Standard Goblins, featuring hasty gobbies like Goblin Guide and Goblin Bushwhacker. 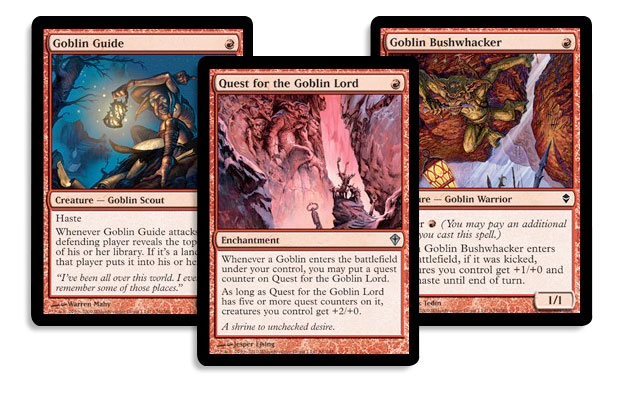 I'm not an expert on Zendikar mythology yet, so I'm not sure just what the Nihil Stone is. What I do know is that this Quest is a very painful variation on The Rack, a classic win condition for discard decks. It's also similar to Megrim, in that it shares the spicy line "Whenever an opponent discards a card ...." I've always liked Megrim, and Quest for the Nihil Stone is a third its cost and hits for a significant 5, rather than 2. 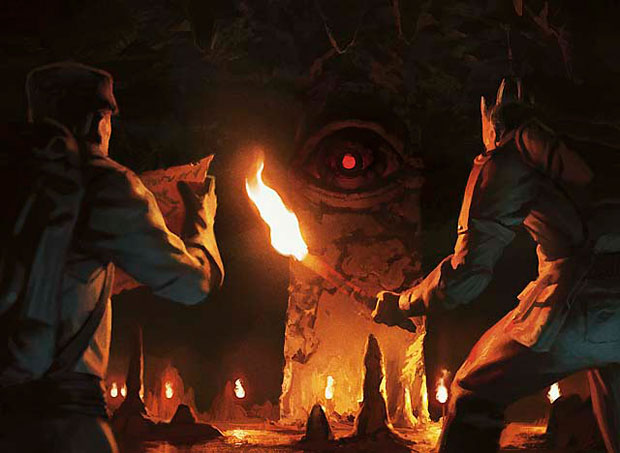 An underused rare from Zendikar that never seemed to cross the casual radar was Guul Draz Specter, the latest in a long line of Specters (creatures that force a discard when they damage an opponent.) Like this Quest, Guul Draz Specter cares if your opponent's grip is empty. Specifically, it boosts itself to 5/5 levels. If my calculations are correct, a hit from a 5/5 plus a smack from the Nihil Stone for 5 is exactly half of 20, meaning your opponent will be through in less than two turns!

Now to actually empty that hand. We're mostly in Standard so far, so let's stick there. The recently reprinted Mind Sludge is completely dedicated to cleaning out hands, while Liliana Vess can perform other tricks, such as finding your Quest, or returning all those discarded creatures to fight on your side of the battlefield. The Specters (including the Hypnotic Specter one) can provide bodies as well as discard. Bloodhusk Ritualist seemed great to me back when I took a gander at all the multikicker cards, so I'll use it here. Nyxathid, meanwhile, is an early (and late) beatstick.

Some black removal rounds out this casually discard-happy deck!

3 Quest for the Nihil Stone

Explorer's Scope is a nifty piece of Equipment that can potentially accelerate your mana base, so I decided to use it. Meanwhile, Rotting Rats can partially fill your graveyard with some black creatures for Crypt of Agadeem, which can fuel a giant Bloodhusk Ritualist.

The last quest I'll venture on today is the quirky Quest for Ula's Temple. This deep-sea voyage on endless seas can conjure up various things from the deep, including, um, Giant Octopuses. Since most of today's decks are my creation, I thought I'd share a cool Ula's Temple deck that was sent in about a month ago by Jared Maas. He created a casual Standard concoction that hit all four of the undersea creature types. Take it away, Jared: 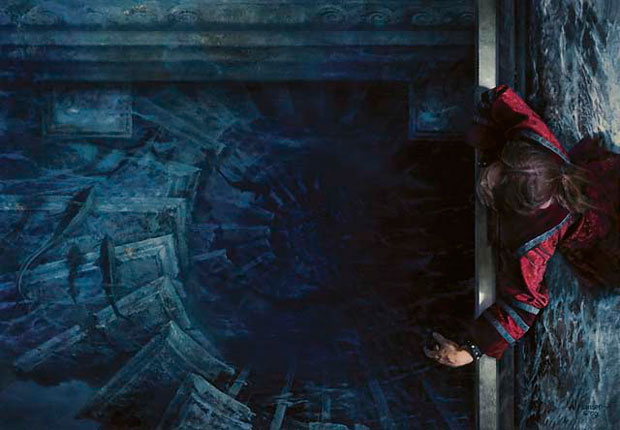 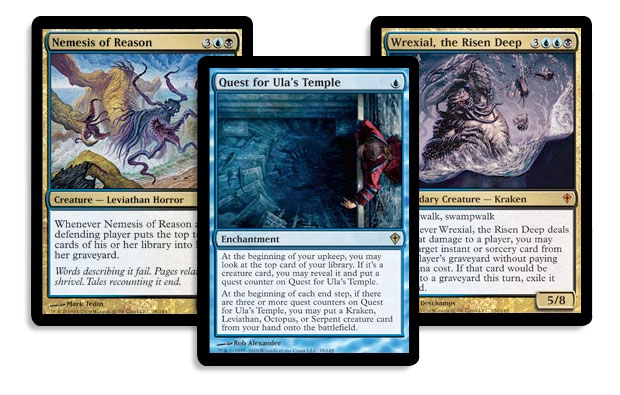 The only aspects of the deck I changed was subbing out four Convincing Mirages for four Kraken Hatchlings, for some early defense and Krakenness. I also shaved some other numbers for Everflowing Chalices, which help accelerate and keep the deck ... flowing. Yeah, I said it.