All-In on the Win

ometimes you can hedge your bets, play it safe, and wait for the right moment.

Sometimes you just have to lay your cards on the table and go for it.

Experimenting is often all about taking risks. You might be wrong, you might look stupid, you might cause a massive explosion and damage valuable lab equipment. You can never be sure about the outcome of an experiment—otherwise, it wouldn't be an experiment at all. The point is, to reach the lofty heights of success, you often have to risk crushing failure.

Today, I have a pair of decks that do exactly that.

Take the Damage and Run

Boros Reckoner has been burning up the Standard scene lately, and players have even taken notice of an infinite combo that the card enables. When given lifelink and made indestructible, the next time the Reckoner is dealt damage, it can deal that damage to itself over and over again, letting you gain an arbitrarily large amount of life. It also combines nicely with Blasphemous Act, where a pair of Boros Reckoners can hit your opponent for 26 damage.

This effect isn't a new thing, and Spitemare is happy to jump in and give you effectively another four Boros Reckoners. We also have Stuffy Doll, which, while incapable of going infinite, will redirect damage from something like Blasphemous Act to your opponent just as well.

Of course, the blasphemous one isn't the only act in town, and an odd creature from Planar Chaos can deal even more damage, provided you're willing to take a bit of a risk. I looked at quite a few ways of dealing damage to your own creatures, from the old-school Stuffy Doll combo of Shivan Meteor to a giant Chain Reaction. Then I remembered Fire Covenant and its Planar Chaos throwback: Volcano Hellion. Volcano Hellion lets you deal as much damage as you want to a creature. The catch is that you also have to take that much damage. Fortunately, a ping from Stuffy Doll or an attack from Boros Reckoner or Spitemare should be enough to make your life total a bit higher than your opponent's, especially if you've given the creature lifelink. As soon as your opponent has less life than you, you can slam down the Hellion, taking yourself to the brink of death and killing your opponent.

As for the infinite life combo, Nearheath Pilgrim is happy to provide lifelink to Boros Reckoner or Spitemare once they become best of friends. You can also just give your creature lifelink directly, thanks to the appropriately named Aura from Magic 2010. Nearheath Pilgrim also combos with Volcano Hellion. You can pair Volcano Hellion when it enters the battlefield, and then choose any amount of damage you want. If you choose 10,000, for example, the Volcano Hellion will deal 10,000 damage to you and a target creature, causing you to gain 20,000 life and survive. Not only does this allow you to use Volcano Hellion on a Boros Reckoner without worrying about life totals, it can be used by itself to gain an arbitrarily large amount of life.

To make the creature indestructible, we'll use newcomer Boros Charm as well as the only slightly less new Rootborn Defenses. There haven't been very many cards in Magic's history that make a creature indestructible, but fortunately this block seems to have provided a pair that are quite effective. When all these pieces come together, the deck looks something like this:


The Bell Tolls for You

Sphinx of the Chimes is a combo engine waiting to happen, but many players have disregarded it entirely. Although there was some talk of combining it with Veilborn Ghoul early on, that combo wasn't rewarding enough to justify the effort. Fortunately, there exists a much more powerful combo if you look a bit further into the past. 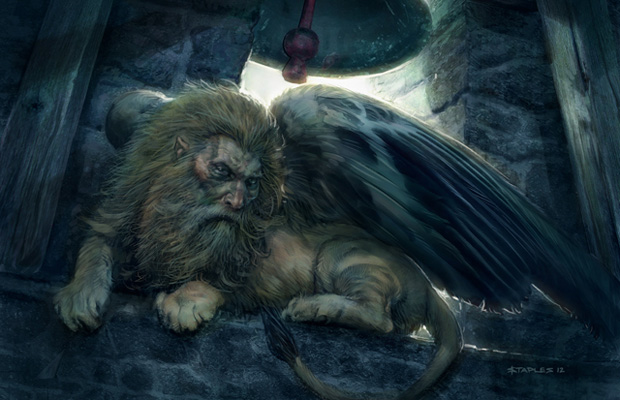 Sphinx of the Chimes | Art by Greg Staples

In the first Ravnica block, the Golgari got a little mechanic called dredge, which allows you to put a certain number of cards from the top of your library into your graveyard and return the dredge card to your hand instead of drawing a card. This mechanic proved to be incredibly powerful and has been the basis for tournament-winning decks in every format. With Sphinx of the Chimes on the battlefield, you can discard two copies of any card with dredge, then replace your first two draws with the dredge ability. The two dredge cards will return to your hand, and you'll draw two cards as usual. Repeating this process lets you put your entire deck into your graveyard and hand.

The real question, then, is which part you want to abuse. There are a number of combos you can pull off by putting your entire library into your graveyard, and several that work well when drawing your entire deck. Most of the combos that came to mind with milling your entire library involve cards like Dread Return, which have seen tournament play for years and aren't exactly new to most players. So, I turned to the hand. The first things that came to mind were pitch cards—spells that allow you to cast them by discarding or exiling cards of their colors from your hand instead of paying their mana costs. The most famous of these is Force of Will, but several others, such as Unmask, have proven to be quite powerful. The one that caught my eye was Blazing Shoal. It allows you to exile a red card from your hand to give one of your creatures a power boost equal to the exiled card's converted mana cost. Unfortunately, there are no red cards that cost fifteen mana to make Sphinx of the Chimes big enough to kill your opponent, but the idea of pumping up the Sphinx's power got my wheels turning.

Soulshriek gives a creature a power boost equal to the number of creature cards in your graveyard. That means, with fifteen creatures in your graveyard, you can one-shot your opponent with Sphinx of the Chimes. The dredge mechanic can put a lot of creatures in the graveyard, but I wanted something to ensure you could get the creatures you drew there as well. I wanted to use One with Nothing because that card is awesome, but at the end of the day, Putrid Imp won out, since the other copies will count as creatures for Soulshriek.

There's one problem with attacking with a 20-power creature for the win: Your opponent can block. Fortunately, this issue was surprisingly easy to fix. Artful Dodge makes Sphinx of the Chimes unblockable and can be cast from either the hand or the graveyard for just one mana. The other obstacle is that Sphinx of the Chimes costs six mana, so I included a play set of Worn Powerstones and a pair of Coalition Relics to make six mana available as soon as turn four.

Selecting which dredge cards you want to use for this combo is surprisingly important. With Soulshriek as the win condition, you obviously want to use creatures. Although the fact that you want all your creatures in the graveyard would push you toward cards with a high dredge number, Putrid Imp will let you discard anything you want. Since you need Putrid Imp and Soulshriek in hand, cards with a low dredge number would be better, to ensure you don't put all four copies straight into your graveyard. Putting these criteria together, Grave-Shell Scarab and Necroplasm appear to be the best options.

Diabolic Tutor will let you search for Sphinx of the Chimes, making sure you aren't missing the key piece of your combo. You'll also need two copies of the same dredge card to get started. Fortunately, there's a tutor that's perfect for that. Although Infernal Tutor is usually used for its hellbent ability, in this deck it's the first part we're interested in. As soon as you have one dredge card in your hand, you can reveal it with Infernal Tutor to go grab the second one. That gives you everything you need to get the combo rolling.

4 Sphinx of the Chimes 2 Artful Dodge

4 Sphinx of the Chimes
37 Cards

Although From the Lab is focused on decks for casual formats, Boros Reckoner presents an opportunity for Standard as well. Therefore, I've decided to present another version of the deck, one that can be played at your local FNM.

We'll use the same basic combo, but instead of the inexpensive Lifelink, we'll use the more versatile Azorius Charm. It can also be used to help keep you alive while you set up the combo. Spitemare and Volcano Hellion will have to go, but we can replace them with more utility cards. Unsummon and Cyclonic Rift can be used to help keep you from dying to aggressive decks while you're putting the pieces together. You can also use them to get rid of an opposing Boros Reckoner if you're going for the Blasphemous Act win.

For the sideboard, Tormod's Crypt gives you some graveyard hate to stop Angel of Glory's Rise combos, while Pillar of Flame and Searing Spear help you fight aggressive decks. Dispel can protect your combo from removal spells and Jace, Memory Adept helps you fight control, giving you a way to find more copies of your combo pieces as well as an alternative win condition.

Time to Bloodrush Off

That's all for today, but tune in next week when I'll be hanging with the kings of crushing, the sultans of smashing, the big bloodrushing bruisers themselves: the Gruul. Although it isn't the most complex and combo-oriented guild, there are some diamonds in the rough if you're willing to look for them. Until next time, may you take the leap of faith and see your risks deliver their rewards.