ello and welcome back to this wonderful Johnny themed column in which I present fantastic concoctions made from my secret diabolical laboratory! Today's topic? Nothing less then Zendikar's most linear of themes, the tribe of Allies! Described as something of a 'Super-Sliver', an Ally works well alongside its compatriots, and the more you have, the stronger your alliance will be. 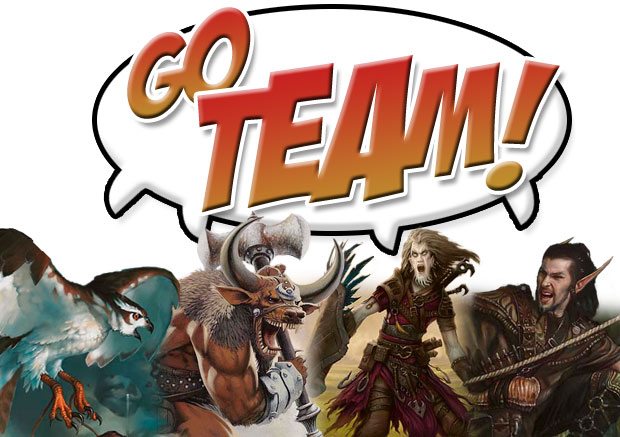 According to this week's Making Magic, which describes the design and nurturing of Allies as a set theme, this theme was almost keyworded thusly: teamwork. Personally, I love the idea of my creatures fully united in teamwork. I imagine them all putting their hands together, shouting some cheer, and throwing them into the air, which would be immediately followed by the Ally-in-question's effect. So a Murasa Pyromancer cheer would be punctuated by a torrent of fire, an Ondu Cleric one could produce refreshing herbs and balms, and throwing hands into the air for a Seascape Aerialist could result in having the rest of your body follow suit.

Teamwork was eventually snuffed out as a keyword, but the Ally tribe remains, to our combination-seeking delight. But wait, I thought Allies were so linear you couldn't find any combos with them? Silly voices in my head, negativity is for skids! Thanks to the latest surge in what has been a tremendous (and extremely appreciated) recent wave of reader email, I've discovered two or three excellent combos with the members of the Ally tribe. Let's head on to these ideas, with the power of teamwork! (Or scrolling.)

I was also considering running a Kathari Remnant or two as it holds the fort pretty well while finding an Ally every time it's played, even if it's just a Stonework Puma.

Nissa, We Miss Ya

Yeah, that was terrible. However, it does let me transition into my section on Nissa Revane, which I'm sure seems completely reasonable right in the thick of Ally week. Wait, it doesn't? This is completely random? Just wait; it'll all tie together at the end. 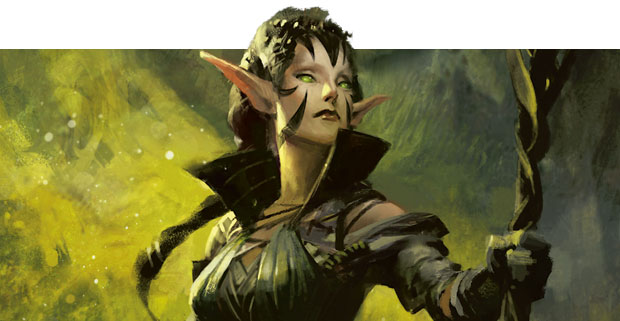 So, Nissa Revane. She's the second monogreen planeswalker in existence and both of them cost 2GG. When I scanned Nissa for the first time, I hadn't yet seen what Nissa's Chosen was, so I was slightly skeptical. Now that I know that the Chosen is an invincible Elvish Warrior, Nissa looks a lot better. Her free Wellwisher ability is absurdly crazy, and is a good way to stall your opponent (notice that this ability adds, not subtracts, loyalty from Nissa.)

Her third ability, though...I am sure that former From the Lab columnist Chris Millar was quivering with excitement upon reading this ultimate. It seems impossible that he, or any lover of the Elf deck, could pass up popping every single Elf from your deck onto the battlefield at once. Long story short: This is insane.

I was sure that there was a way to take an offbeat direction with a Nissa Revane deck, and in a fine email, Havoc Jack proved it. Here's his ideal Nissa activation: 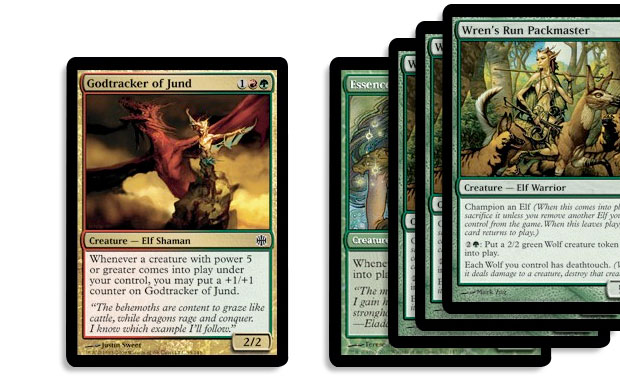 1. Resolve Nissa Revane's ultimate ability, searching up a Godtracker of Jund, an Essence Warden, and no less than three Wren's Run Packmasters.

3. Profit! The Godspeaker has an arbitrarily large number of +1/+1 counters on it, the Essence Warden has gained you infinite life, and the Where Ancients Tread you might have started with on the battlefield burns any number of opponents out.

Yes, Nissa Revane seems the ideal way to pull the 'champion' trick, which revolves around countless leaving and entering triggers and is a rules headache. But Havoc Jack wasn't finished:

Once you've gone that far, you can do even more silly things. For each additional champion (any of the changeling champions will do for this as well), you can add one more 'enters the battlefield' effect on that original creature. So if you kept resetting Wood Elves, rather than just any old Elf to start it off, you'd end up with a whole stack of land. Or use Deranged Hermit for roughly a million Squirrels. 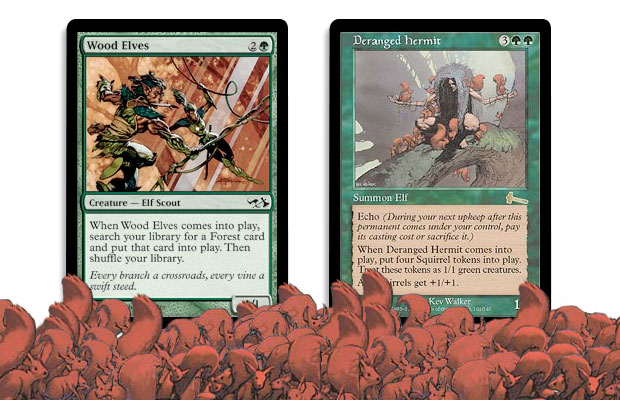 Or Elvish Visionary for drawing your whole deck. Or Wurmskin Forger for beefing up your Elvish army. Well, I'm sure Jack can't ratchet up the complexity further. Let's ta...

Think I can't ratchet up the complexity any further? Think again. If you search up no less than six champions, you can set up two independent cycles. The advantage of this is that if you also search up a Heritage Druid, two cycles net you infinite mana as well.

Okay, Noel, Nissa Revane may be crizazy in an Elf deck, but this is Ally Week! What's with the Elves? Unless you're telling me there are Elf Allies...oh boy. Jack?

One more, slightly unrelated. There are three currently printed Elf Allies. If you summoned all twelve with Nissa Revane, you'd get twelve redundant copies of vigilance! More interestingly, all four Turntimber Rangers would trigger twelve times each. 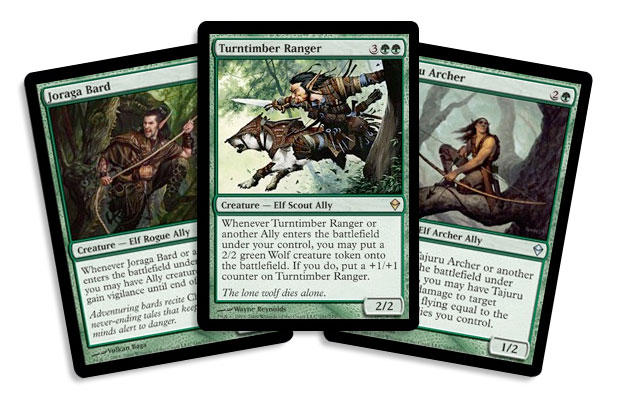 How many Wolves is that? By my count, I'd say at least 117. Seriously, though, slamming all twelve Elf Allies onto the battlefield is pretty awesome. 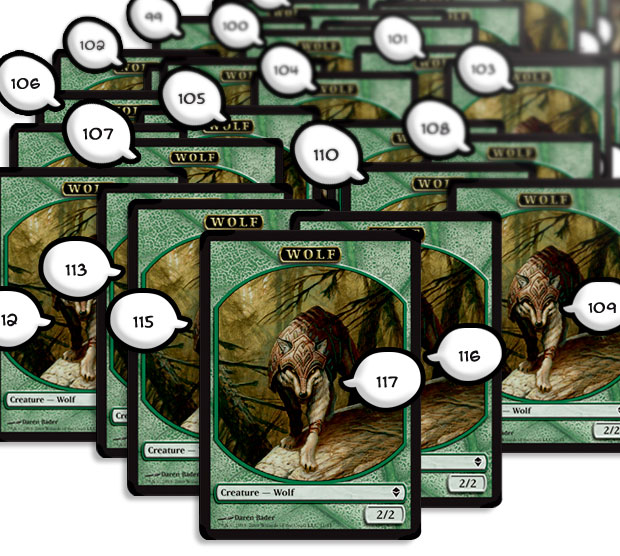 This leads us very neatly into a subsection about Turntimber Ranger. Some readers have pointed out that with a slight manipulation of creature types, this is busted in half. Peter and Nathaniel Miles prefer to use Conspiracy (naming Allies) to create infinite 2/2 Wolf Ally tokens and have an infinitely powered Ranger. Others, like Karl Latremoullie and Mark R. go for Artificial Evolution, to change the Ranger's instance of "Ally" to "Wolf" or vice versa. In Mark's humorous terms, "Turntimber Ranger + Artificial Evolution = Buckets of Lols."

There are so many variations on decklists that could be made to sum up this section. You could slant it heavily towards Allies, or turn it into a 100 card Nissa Revane-themed deck (which sounds fun as hell.) I'll do my best to incorporate a bit of everything, but it'll be tough.

Again, your own interpretations are highly encouraged. As you can see, I shifted the Godtracker of Jund for an Elvish Vanguard, which seems a lot better in this list.

The only thing I worry about is getting Nissa to ultimate levels. I included a lot of chump blockers to help her stay alive (including Nissa's Chosen) but I wonder if it'll be enough. It seemed to be during some brief testing.

Also, I can't help but think Elvish Soultiller finally has a home amongst this set of ideas, in case a Day of Judgment ruins your day. There are tons of quirky Elves that could also find a home here, like Ambush Commander or Voice of the Woods. Have fun!

I knew when Ally Week came I would have to build 'the Ally deck'. This is just like 'the Sliver deck', you know, the one that used one of every Sliver ever in a giant deck? Since there aren't nearly as many Allies in existence, I think we can squeeze this into a 60 card deck. This follows the principle of the 'Insert-Tribe-Here decks': Just play Allies and have fun with them! Enjoy watching a Kazuul Warlord load your team with +1/+1 counters, or Kabira Evangel making your team unblockable or untargetable, or Sea Gate Loremaster tapping to draw four or five cards at once. Overall, just enjoy the mechanic!

Hypergenesis is there as a way to pump out all the expensive Allies from your hand onto the battlefield at once (and to show it's still fun to use it outside of the Cascade deck.) Meanwhile, how could I pass up using Allied Strategies in a domain Ally deck?