reetings, laboratorians! Modern Masters has hit the shelves, and cards we haven't seen in years have become much more available. Today, I'll be looking at a pair of decks that take advantage of some of these cards.

The first card I'll be looking at is Bridge from Below. Not only has the card been reprinted, it has some awesome new art as well. The card has a history of abuse in dredge decks, and as luck would have it, Modern Masters contains quite a few cards with dredge as well. Although Bridge from Below is traditionally used with cards like Narcomoeba and Dread Return, I have something a little different in mind. 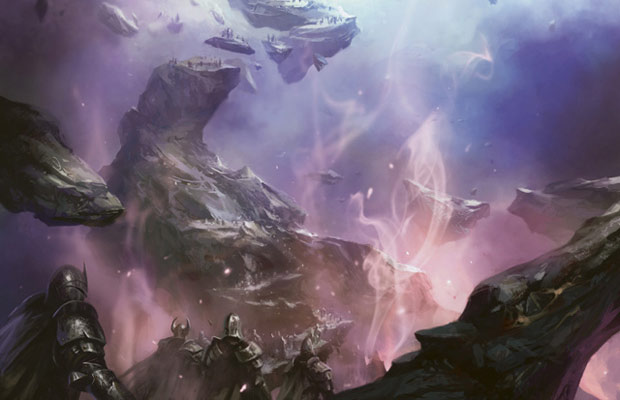 Bridge from Below | Art by Daarken

Unless you can give it haste! If you can do that, the two Hell's Caretakers can return each other indefinitely. With Bridge from Below in your graveyard, that gives you an unlimited number of Zombie tokens. Oh yeah, and the Zombies can have haste too depending how you provide haste to your army.

Putrid Imp and Oona's Prowler allow you to discard cards at any time, making it easy to get Bridge from Below and Anger in your graveyard in case you draw them. They can also be used to put your dredge cards back into your graveyard, allowing you to dredge turn after turn.

Morgue Theft allows you to return one Hell's Caretaker to your hand to get things started. That way you don't have to worry about drawing one, which leaves you free to spend your draws filling up your graveyard. Although it's a bit expensive, the ability to cast it from your graveyard is invaluable in this deck.

Lignify allows you to deal with problem creatures without killing them, keeping you from triggering Bridge from Below's exile ability. A 0/4 is no threat, and since this deck plans on attacking with an arbitrarily large horde of Zombies, the blocker really isn't relevant either.

Finally, a few cycling lands give you the option of playing the land, or if you don't need it, cycling it. That gives you the choice to draw a card or use the dredge ability of a card in your graveyard.


Ach! Hans, Run! It's the Reveillark!

Reveillark has a long history of being used in combo decks, and often quite complex ones. The most common shenanigans involved Body Double and Karmic Guide, but I'll be taking advantage of Saffi Eriksdotter. You can sacrifice Saffi targeting Reveillark, then sacrifice the Elemental to make your opponent mill four cards with Altar of Dementia or to give Devouring Swarm +1/+1 until end of turn. Reveillark's ability when it leaves the battlefield can return Saffi, and Saffi's ability will return Reveillark to the battlefield. Now you're back where you started and you have two potential engines: either you can make your opponent to mill his or her entire library via the Altar of Dementia, or you can attack with an infinitely large Devouring Swarm.

In case neither of these options work for one reason or another, I'll also include Death Cultist. Since Reveillark can get back two creatures with every iteration, you can return the Cultist to the battlefield causing your opponent to lose an arbitrarily large amount of life while you gain that much life.

Eladamri's Call and Worldly Tutor can easily and cheaply search for the combo pieces, making the deck far more consistent. Congregation at Dawn is especially good, allowing you to search for Reveillark, Saffi Eriksdotter, and Devouring Swarm in one go. Although it will take a few turns to draw and cast them, it does guarantee you'll get the combo put together, putting your opponent on a definite clock.

Path to Exile is one of the most powerful removal spells ever printed, and with its printing in Modern Masters, it will be much easier to pick up a few copies if you don't already have them. Getting rid of any creature permanently for only one mana is a bargain, even if your opponent does get to search up a land.

Abrupt Decay is a more recent removal spell that's already making a splash in older formats. It can destroy any permanent that costs three or less, from creatures to enchantments to Planeswalkers. As long as it's cheap, Abrupt Decay will get rid of it for you.

4 Congregation at Dawn 4 Path to Exile

Our two competitors have entered the arena, and now it's time to see who the real Master of Modern is. Will the Zombie horde trample over Reveillark's nest, or will Saffi save the day? Let's find out!

The Zombies cast Buried Alive, getting Hell's Caretaker, Stinkweed Imp, and Greater Mossdog before it then cast Life from the Loam and returned three lands. Saffi's Bird found a fifth land, however, and cast Reveillark to combo off for an infinitely large Devouring Swarm as well as infinite life loss.

Saffi's Bird cast Devouring Swarm, and Stinkweed Imp dredged five, and a trio of cycling lands dredge up a total of eleven more cards. Life from the Loam returned the cycling lands, and three Stinkweed Imps went back to the graveyard during cleanup. Saffi's Bird passed the turn, and Anger Bridge flashed back Morgue Theft to return Hell's Caretaker.

Saffi passed the turn with no play again, and Anger Bridge cast Hell's Caretaker. Before the Caretaker could make it to the upkeep, however, Reveillark hit the battlefield, and an infinitely large Devouring Swarm attacked for the win.

I hope you are all having fun with Modern Masters. The set looks to be a blast for Limited, and I know I'll have played at least one draft and a Sealed Event or two by the time you read this. In fact, I'll be headed down to Grand Prix Las Vegas in a few weeks to play even more Modern Masters! Until next time, may you be able to prove your own mastery. See ya!