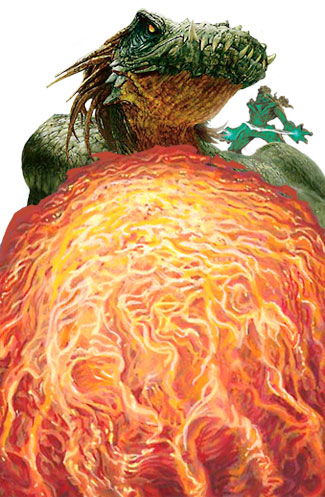 ello all, and welcome back to my diabolical laboratory after a bit more of a break between columns than the usual one week. I'm sad to say that my usually reliable Apple computer had one of its rotten moments, which are few and far between. My article for last Wednesday, which was set to go a couple of days before, was one of the many casualties in the "Grand Document Deathdate," as I am calling it. Thus, I couldn't be ready in time and had to take a blank week.

But enough of this melancholy topic, I say! It's Timmy Week, baby! A week celebrating the joy of the big spell, which may or may not be a giant Fireball; the glorious rush of a Craw Wurm rumbling across the battlefield for 8 (because it's got a Rancor on it, of course!); and most of all, the pure and untainted fun of Magic.

Now I know what you're all thinking: "This is the Johnny column! How can a mad scientist possibly channel the spirit of power gaming?" While I'm as miffed as any combo enthusiast about Johnny not getting his own week (although, Timmy is often contextually followed by his fellow player psychographics ...), I enjoy tapping out for Verdant Force as much as anyone. Conflux still has that new set shimmer to it, so let's see what Timmytastic marvels lie within.

The printing of Thornling in Conflux as a mythic rare highly intrigued me. From my very first glance at the card, I could tell that it was a careful homage to the one-time blue finisher extraordinaire, Morphling. Before Conflux, there were only two previous allusions to Morphling: Pemmin's Aura and Torchling. The one and only Mark Gottlieb named the former with a very appropriate anagram in mind (PEMMINS AURA = I AM SUPERMAN.) The latter was simply a color-shifted version of Morphling itself, with similar activated abilities.

Now we have the second direct color-shift of Morphling, and it makes me wonder whether or not we'll see a black or white 'Ling. My personal conspiracy theory is that we've already seen both combined in the form of Stillmoon Cavalier, but it doesn't hurt to dream, eh?

Now let's fully tackle the deck-building opportunities presented by the thorn-horned Beast. To be honest, after analyzing Thornling completely, I thought it was a great Timmy card (theme week!) but as a Johnny centerpiece? Not so much. As it happens, there's nothing I like better than to combine a seemingly straightforward fatty with a juicy combo, and in a great email, Nate H. did just that. He wrote: 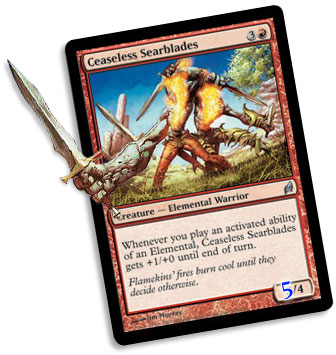 This is a perfect case of right place, right time. It is very fortunate for Thornling that it coexists in Standard alongside Smokebraider, Soulbright Flamekin, Fertilid, and Morselhoarder, which were the mana accelerating Elementals Nate was alluding to. Ceaseless Searblades was definitely a ripe target for deckbuilding before Conflux, but now I just imagine untapping with Thornling also in play for astronomical amounts of damage. As Nate said, "If you have a mana-producing Elemental (especially Soulbright Flamekin) in play with Thornling and Ceaseless Searblades, your opponent is going to be facing some serious damage." Send all that red mana through Thornling's colorless activations (while perhaps spending a green to suit it up with trample) and then attack with it and the now lopsidedly huge Ceaseless Searblades. Smashy!

Nate also thought Incandescent Soulstoke would be a good addition, saying, "Incandescent Soulstoke can drop a creature (preferably a Morselhoarder or Spitebellows) into play for some extra damage, as well as giving Thornling +1/+1 (or potentially +2/+0)." Briarhorn, the amazing Giant Growth on legs, is quite efficient when targeting Thornling, netting as much as +6/+0 or +0/+6.

And as if the great idea wasn't enough, Nate bequeathed me with a Standard decklist, of which I haven't changed a card. If popping huge fatties into play at a discount, or creating ridiculous amounts of mana doesn't say Timmy, then I don't know what does.


If I wanted to add some new cards to the deck, I might go with one or two copies of Glarewielder, since there is a full set of Flamekin Harbingers to find your Elementals. Glarewielder would allow your giant creatures to pass by your opponent's forces untroubled.

Nate's use of Ceaseless Searblades inspired me to find more uses for the unstoppable flamekin. I thought to myself, "Self, what recent subgroup of cards deals with both cheap activated abilities and power level?" The answer came in a flash: the Naya "5 power matters" creatures. Imagine if Mosstodon were an Elemental—you could activate it three separate times (each targeting itself), which would get Ceaseless Searblades to be a 5/4. Then you could target it with Mosstodon and wing with a 6/4 trampler. The same logic applies to Beacon Behemoth, Rakeclaw Gargantuan, and the mighty Speakbreaker Behemoth.

Of course, sadly none of these creatures are Elementals, but that's easily fixed. Either an Artificial Evolution on Ceaseless Searblades or a Conspiracy set to Elemental should rectify that situation.

Another cool pocket of synergy that Ceaseless Searblades shares is with the Mistform creatures from Onslaught Block. Spend a measly 1 to make your Mistform Stalker an Elemental, and then repeat that over and over, making the Searblades very large in the process.

Finally, an already explored Ceaseless Searblades combo is worth sharing here again, since I seem to be exorcising all the possible combos with the creature. Chris Millar discussed it back in the thick of Lorwyn block. Having a Mirror Entity and Brion Stoutarm out alongside Ceaseless leads to an infinite damage combo, which you can read about in Chris's article.

One of my favorite parts of Conflux when I viewed the full spoiler for the first time was the riff on the "5 power matters" theme imprinted within the Naya shard. This concept somehow made its way onto sorceries and X spells, where the requirement was that the X level be 5 or greater. Kenneth Nagle quite appropriately dubbed these spells "explosive spells." That name seems almost literal in the case of Banefire, which actually singed my hand upon touching it.

An aspect of Timmy that I believe X-ists is his love for X spells. How big can I make them? How far can I push one Fireball? With his deck list and idea that he sent me about a month ago, Tony H. decided he was going to push those limits far indeed. His cut-and-dried idea was to use the suspicious Rosheen Meanderer alongside Conflux's exploding spells, to which I cry, "Heck yes!" With a turn-two Druid of the Anima into a turn-three Rosheen Meanderer, a turn-four Apocalypse Hydra could wind up as a 14/14 monster. That's insane! Likewise, a Martial Coup could make seven 1/1 Soldier tokens (while unfortunately killing your mana producers, but we'll handle that in a bit), and a Banefire could straight up slaughter a Windbrisk Raptor.

As I said, though, Tony took even more drastic steps in his quest for giant X spells. He added Lotus Blooms, which are explosive in their own way. Add a Lotus Bloom to the above scenario, and you've got a 17/17 Apocalypse Hydra, or a Banefire that could halve your opponent's life total.

I mentally applauded Tony for thinking outside the box and not restricting himself to the "explosive spells." Sinking all that mana into a Flameblast Dragon attack isn't half bad of an idea either.

The question still remains, however. How can we pull off a Martial Coup while having Rosheen Meanderer survive? I narrowed it down to two solutions: Shield of the Oversoul (which would beef Rosheen up to an indestructible 5/5) or Cauldron of Souls (expensive, but isn't useless on Flameblast Dragon.) In the end I went with a couple copies of the Shield, but please feel free to try something else. Here's a slightly modified version of Tony's deck.

2 Shield of the Oversoul

4 Druid of the Anima 4 Rampant Growth

4 Naya Charm 2 Shield of the Oversoul


Other fun and underused X spells that could be added to the deck are Balduvian Rage, Orochi Hatchery (for which I have a soft spot), Molder (which was in Tony's original deck) and Riptide Replicator, which could churn out giant creatures after a sweeping Martial Coup.

A Spark of Timmy

From a deck-building perspective, I've attempted to hit both of Timmy's major loves: giant creatures and giant spells. What's left but to play around with Timmy himself? Timmy, Power Gamer may specifically cite his desire to pop Leviathan into play, but I have a different idea, one that just might combine Timmy's essence with the Johnny essence of From the Lab—namely, playing Timmy, Power Gamer alongside Mana Echoes.

They seem to be a pretty good match. Timmy's ability requires only colorless mana, and Mana Echoes only produces colorless mana when a creature comes into play. Disregarding some details I'll get to soon, the ideal creature to pop into play with Timmy with Mana Echoes on the table is one that can bounce itself back to your hand. If you have enough of the right creature type, you'll be able to make infinite mana. At that point, you could theoretically use it to pop all the creatures from your hand into play!

As it turns out, this mystery ideal creature is a win condition by itself: Sparkcaster.

Let's say you have five other Kavu in play. When you pop Sparkcaster into play from your hand, Mana Echoes will create five mana. Then the Sparkcaster will return itself to your hand, but not before it has pinged your opponent for 1. Use four of that five mana and repeat the process. Infinite mana and infinite damage!

If you can't find a Sparkcaster, Horned Kavu does the same thing, minus the infinite pinging. You'll still have infinite mana, but your true Plan B should be Kavu Monarch, which will swell with +1/+1 counters. Plus, it has built-in trample!

Timmy can pop things like Kavu Howler and Kavu Mauler into play early than usual, while Thunderscape Familiar can let you drop Timmy earlier than usual. Steely Resolve can protect your Kavu until you build up to five of them. At the end of the day, this is a Timmy tribal deck with a Johnny twist in the mix. Have fun with it, and don't forget to mix and match the Kavu of your choice! 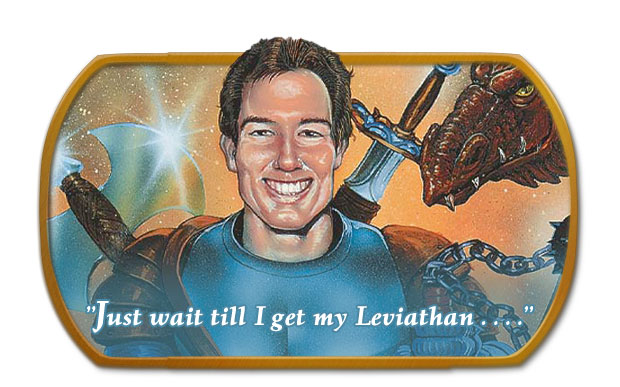