elcome back to From the Lab, Magic players of all shapes and sizes. I'm your ever-so-handsome host this Thursday (just like every Thursday), and today we're going to go on a quest or two together. No, not some sort of spiritually enlightening pilgrimage to a far off place, but a magically enhanced quest to some sort of ascending platform.

I speak, of course, of the cycle of Ascensions that can be found in Magic's latest set, Zendikar. I'm slightly familiar with these enchantments, being one of the first casual players to lay eyes on Pyromancer Ascension (my preview of which can be found here.) My co-columnist and this site's editor Kelly Digges has talked at length about two other Ascensions, Luminarch Ascension and Beastmaster Ascension. Since I rarely feel comfortable riffing on a card that's already been well riffed, we'll pass on those three for now. Instead I really want to focus on the blue and black Ascensions, which haven't been as widely covered. These two Ascensions, Bloodchief Ascension and Archmage Ascension, seem at opposite ends of the spectrum: One requires a relatively easy three quest counters, the other a whopping six. 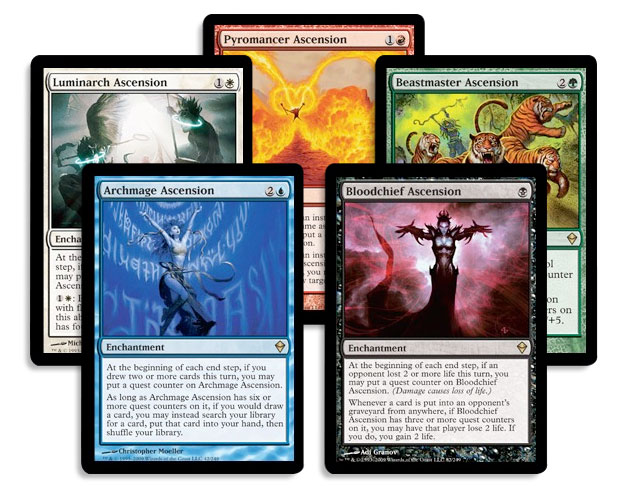 I want to take a paragraph or two to express my personal Vorthos side in regards to this cycle. I love the idea of a bold adventurer of Zendikar hearing about this mystical quest that one can undertake to find one's true calling. Step by tiny step, this adventurer fulfills certain requirements of this calling, such as leaping into the fray of any battle (Beastmaster Ascension) or researching all sorts of information (Archmage Ascension). Once the quest has been fully accomplished, this adventurer finds a great power within himself, such as summoning Angels out of thin air (Luminarch Ascension) or doubling the capabilities of sorcery (Pyromancer Ascension.) This idea is such a large one, and to be accurately represented in a cycle of cards that are fun to play with makes me a happy Noel.

But I digress! There is some ascending that I must partake in! Let's get at the ideas and decklists, shall we? 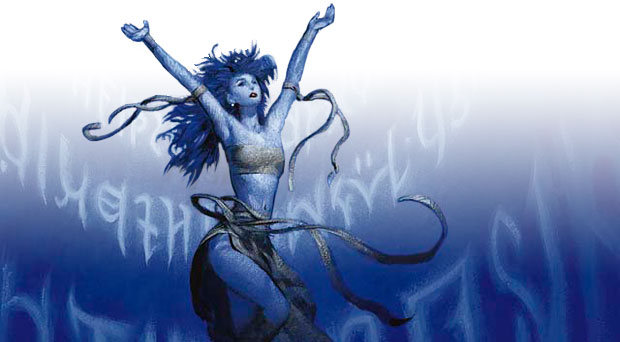 Let's start with that big and blue member of this cycle, Archmage Ascension. To start off with, this card intrigues me for many reasons. You're required to assemble six quest counters on this, meaning you'll have drawn at least twelve extra cards by the time you do so.

The problem with this is twofold. First, if you fill your deck with different spells that draw you two cards, by the time you fully charge up your Ascension there won't be much to search for. As cool as turning Divination into a double Demonic Tutor is, if you have nothing worth searching for other than more card draw, it's almost useless.

Secondly, if you are drawing tons of cards in the first place, there's a good chance that you've already drawn into whatever you might want to search for. So if you're looking to use Archmage Ascension to cobble together singletons for a combo, you might as well drop it for a straight-up tutor.

How could I solve both of these problems (having tons of draw spells in the deck, and the probable drawing of your searchable cards)? We'll get there. First, let's go through some card choices that I considered and that would make a fine addition to any Archmage Ascension deck.

While many of these cards are fine, I wanted to solve the above problems with one card, and I eventually found Archmage Ascension's perfect companion: Mindmoil.

As long as you have three or more cards in your hand, every time you cast a spell, you'll pull a mini Teferi's Puzzle Box and replace your hand through drawing. This allows me to play other instants besides card-drawing ones. For example, a Lightning Bolt will now let me create a quest counter for free, instead of having to cast a Catalog.

Also, Archmage Ascension offsets Mindmoil's inherent disadvantage of randomizing your hand. Instead of drawing randomly off of the top, if the Ascension is fully quested, you can find whatever cards you want. You can even find the exact hand you placed on the bottom of your library!

What cards are best to tutor up with the Ascension, with a Mindmoil on the battlefield? I've always thought that if Mindmoil could be controlled, it would be great in a storm deck. Well, now that you tutor up lots of cards whenever you cast a spell, you could theoretically run lots of Scattershots and Brain Freezes. Here's the process: Cast a Brain Freeze. Mindmoil triggers, and you slap your hand on the bottom of you library and tutor for more Brain Freezes. Cast another one, and rinse and repeat. This isn't an infinite combo, but it's a great way to get all your storm spells on the stack at the same time. You might not kill your opponent in one go, so I added some Mnemonic Nexuses to restock your library for next turn. This is kind of a weird deck, but what else is new?

There's a small toolbox in case the storm cards don't work out. Hindering Light can protect your vulnerable enchantments, and Spellbound Dragon is an alternate means of victory (discard those extra Mindmoils!). Research // Development, meanwhile, becomes really good under a fully quested Ascension. Either you tutor for your other three Research // Developments (or two and a Mnemonic Nexus), or you get three 3/1 Elemental creature tokens, or some combination thereof. The choice is suddenly a lot harder for your opponent when your every draw is a tutor.

Here's another Archmage Ascension deck. This one loses the Mindmoils and focuses on another synergistic enchantment: Spiteful Visions. It automatically amps your card drawing to the point where you get a quest counter per turn, and once you assemble all six, you start breaking the Spiteful symmetry. Cards like Skyscribing become absurd at this point, as they become a Blaze and "

: Tutor for X cards" at the same time. Etherwrought Page, among its many talents, can offset the life loss from Spiteful Visions. Truce, meanwhile, is just fun when cast under a fully quested Ascension: You'll tutor for two cards, and since you didn't draw the two, you'll gain 4 life as well!

Some fun in-color singletons are nestled in there. I particularly like Ertai, the Corrupted as a means of controlling Spiteful Visions damage. 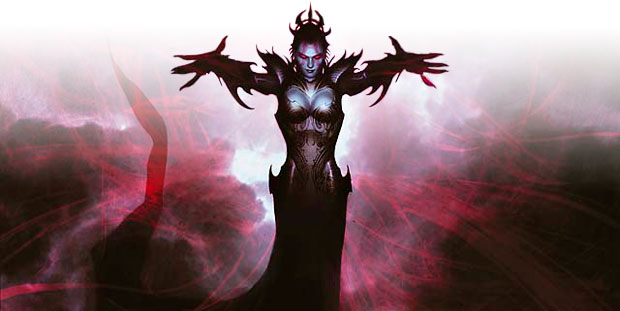 Bloodchief Ascension is perhaps the most appealing of the five Ascensions on a purely visceral level. Think about it. It only costs one mana, it requires the second least amount of quest counters (three) to fully charge, and its final ability is a bit bananas.

I suppose it's no secret or surprise, then, when I inform you all that I've gotten quite a bit of mail about Bloodchief Ascension. Numerous combos with this Zendikar rare have been spotted—some of them even in Standard, no less!

One email amongst these came from Brian Stroud. He shared many ways to put quest counters one the Ascension, such as Blood Seeker (preferably two of them), Vampire Nighthawk (Brian cited its game-stalling ability and 2 power on a flying body as reasons enough), and Hideous End (kill a nonblack threat and add a quest counter!). His favorite combo with a fully amped Bloodchief Ascension was Archive Trap. As Brian said, "If your opponent is foolish enough to search their library, BAM, hit 'em with an Archive Trap to instantly make them lose 26 life while you gain 26."

As crazy as this is, it's not my favorite Bloodchief Ascension combo. The one that grabbed my top honors came from Leo Schwarz. Take it away, Leo:

"Bloodchief Ascension and Memory Erosion. When both are out and the Ascension is charged, your opponent now has a grand total of three spells they can cast for the rest of the game, and if one of them isn't Naturalize, they lose."

Millicious! Your opponent gets milled for two every time they cast a spell, and if this spell is an instant or sorcery, it will hit the graveyard after being cast. All of this adds up to a painful drain of 6. If the spell is a creature, waste it with Hideous End. Eventually, your opponent will have to stop casting spells, which is, I'm pretty sure, not the best way to win a game of Magic.

Leo had his own suggestions for charging up Bloodchief Ascension in the first place, and unlike Brian's, they were Extended legal. Leo's mind "goes automatically to Inkfathom Infiltrator to add counters, or Looter il-Kor with a Bonesplitter."

Inspired, I looked around for some ways of my own to put quest counters on Bloodchief Ascension. Pooling Venom is cheap and painful, and Hissing Miasma wards off attackers. Parasitic Strix and its Tidehollow Sculler cousin definitely seem worth it in a Standard build, as does Countersquall. Spiteful Visions make its second appearance in this article as another suggestion—it does basically Shock your opponent on each of his or her turns, after all.

My favorite method that I found was Maralen of the Mornsong, which is no surprise given that it's a go-to card for me. Maralen stops all card draws and automatically causes a loss of 3 life on your opponent's turn. It also forces a library search, which is a good way to be able to cast your Archive Trap for free. Of course, with a Maralen on the battlefield, a player won't lose to decking even if his or her whole deck is milled, so a sacrifice outlet will be key after a certain point. Use her to search up a Smallpox and cast it, choosing her as your sacrifice.

I made two different decks, one Standard legal and one Extended. 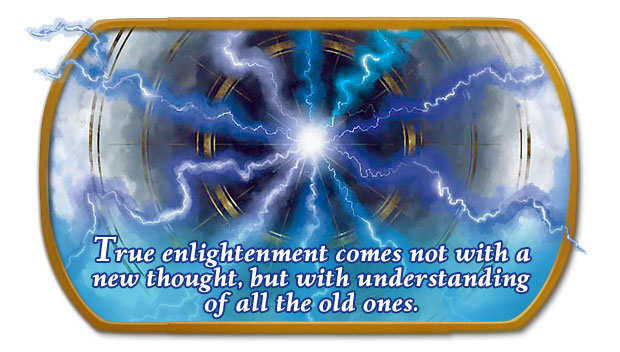