ey all! Welcome back, and get primed for an aura good time! That's right, it's Aura Week! Although not technically a repeat theme week (from Enchant Creature Week back in 2002), Auras are special and deserve our honor.

I started my thought process on this week by asking myself, "Self, what is an Aura?" In the lexicon of the sticky and uptight rules, it's a type of enchantment that can be placed on permanents, players, or even instants in the graveyard! From there it affects whatever it is enchanting. 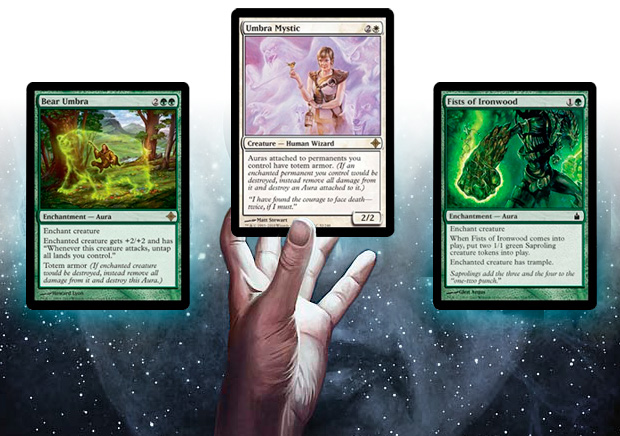 In the loose and flexible realm of the concept, though, Auras are fun to ponder. In any sort of fantasy context, when you enchant something, that something gains some sort of power. An example might be Eragon becoming one with nature in Eldest, or Kiku, Night's Flower, Night's Shadow becoming cursed flesh in the Kamigawa trilogy of books. You could also apply the concepts of Auras to any real-life situation, just for fun. Here's an example that's easy to comprehend. Let's take the word 'plug.' Funny word, right? Plug. Now let's cast Embolden (not the Odyssey Embolden) on 'plug.' Now we have 'plug,' which is just 'plug' enchanted with a bold cover. We could also cast Italicize (sadly, not a card name yet. It could be a global enchantment that just tips every card on the battlefield diagonally!) Now we have 'plug.' Finally, to conclude the thought experiment, let's pretend that Umbra Mystic is on the battlefield, giving these two Auras (Enchant Word) totem armor. If someone destroyed our souped-up plug, we could choose to destroy Embolden (not the Odyssey Embolden) instead, completing the cycle of fonts with 'plug.'

I guess that's a roundabout and misguided way of saying that Umbra Mystic is quite cool, as are all the totem armor cards from Rise of the Eldrazi. Let's get to some neat decks!

All that separates Bear Umbra and Boar Umbra, on a naming basis, is a simple change of vowel. Stylistically, they're similar as well, as each depicts a shadowy figure of the animal in question. But their rules text splits them into two groups. You see, totem armor is a really neat ability, but as far as strategy goes, there are two types of totem armor cards. The first type (represented by Boar Umbra, Drake Umbra, and Mammoth Umbra) is your basic buffer Auras. You wouldn't want to enchant a simple beater, such as Lagac Lizard, with one of these. True, you'd get a big lizard, but if it were killed, the Mammoth Umbra would be destroyed instead and you'd end up with just that 3/3 again. I'm not saying doing this isn't viable, but for these it might be better to cast them on creatures that already have abilities, such as Merfolk Looter. If they kill your Mammoth-y Merfolk Looter, at least you can still tap to draw and discard. 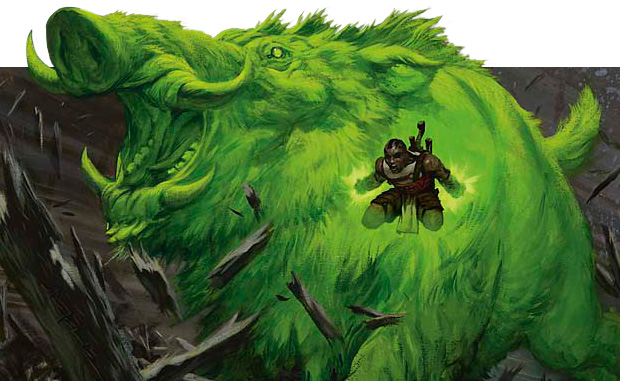 Bear Umbra, Crab Umbra, and Snake Umbra represent the second type; these Auras don't pump as much, but make up for it with an ability of their own. Accordingly, the reverse is true here. A Snaked Leatherback Baloth is a surefire threat, and when your opponent manages to stop it, the 4/5 Baloth is still there to be reckoned with. 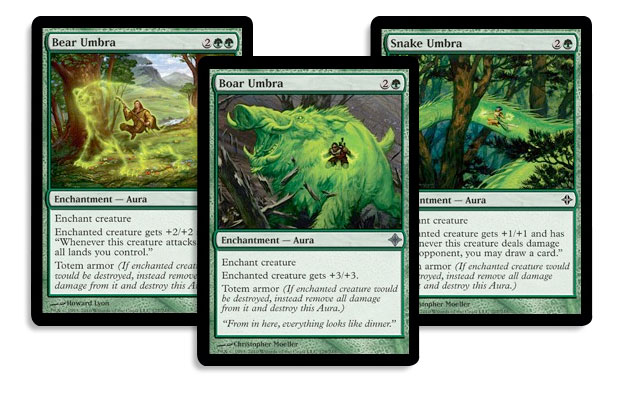 Now that I've exhausted all my thoughts on totem armor, let's build some sweet decks! Boar Umbra (a.k.a. the new Moldervine Cloak, which was the new Elephant Guide) is bound to appear in many decks here going forward, just as the Cloak did a couple of years ago. Bear Umbra, meanwhile, has that cool ability: "Whenever enchanted creature attacks, untap all lands you control." Many readers have suggested I pair this Aura with Wake Thrasher. While that's definitely a sweet idea, I think I'll stay in Standard and just kill my opponent in one turn. How?

to gain a new combat phase. Thus, you can repeat that to swing for 5 over and over.

If you can't find the Charger, go with another Dragon, Flameblast Dragon. Oh boy. Tap all your lands in response to the Umbra's trigger, then tap them all again for some crazy mana counts. Throw it all into Flameblast Dragon to Blaze something (preferably your opponent) to death.

Two other prime targets are Feral Hydra and Omnath, Locus of Mana. Feral Hydra can be played early and grown later, especially with Bear Umbra helping out. Omnath, meanwhile, can invest large chunks of green mana for pumpage and later use, becoming a true threat when protected with an Umbra.

Umbras—both Bear and Boar—show up here, as well as Snake Umbra (just for fun.) Early targets include Elvish Visionary and Ondu Giant, useful creatures that accomplish their initial task and then need a suit to swing in. Aura Gnarlid, meanwhile, is a complete house. It's unblockable 90 percent of the time in this deck, with Auras every which way.

Some removal (including Comet Storm: imagine pulling the Bear Umbra mana trick with this puppy in hand!) rounds out the deck.

Look at Umbra Mystic for a quick second. What does her name, ability, creature type, and artwork all suggest? Professor Umbridge, of course, that terrible villain. She's a Human Wizard that likes to protect things that are important to her. Fortunately, we can use Umbradge against our opponents. Let's just hope we're not playing a Centaur Tribal deck. 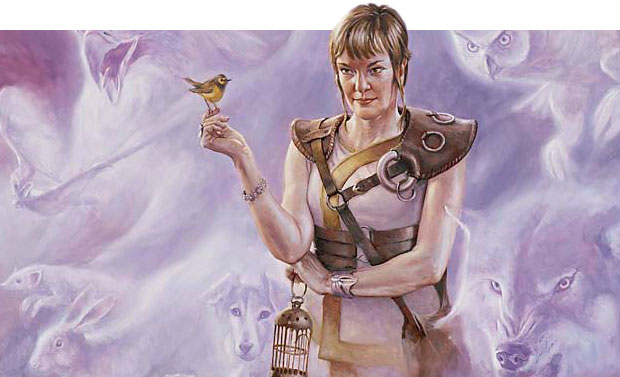 Umbra Mystic is the latest creature that likes to manipulate Auras for a creative purpose. One of its partners in crime combos very well with it indeed: Nomad Mythmaker. In response to any creature kill, use the Mythmaker to get any Aura from the graveyard onto the threatened creature. Since that Aura will have totem armor, it goes back to the graveyard, leaving the creature unharmed. Now consider that Aura was one of the Ravnica "enters the battlefield" Auras, such as Fists of Ironwood (ooo), Flight of Fancy (ahh), and that most useful of Auras, Faith's Fetters. 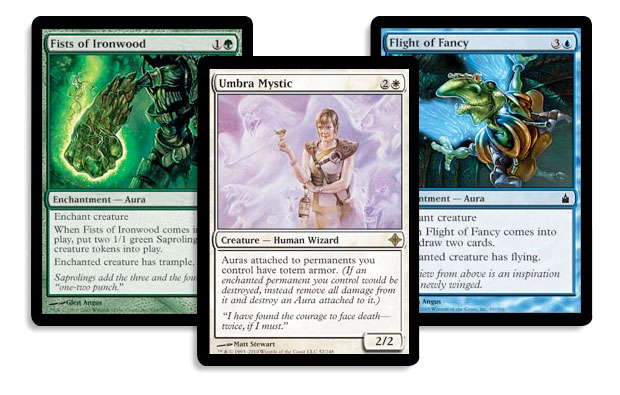 Normally, you would rarely want to use more than one Aura on a single creature. That's just an invitation to get disadvantaged, as Aura himself told us on Monday. However, Umbra Mystic solves that problem. Naturally, with the Mystic backing me up, I now want to take advantage of this. Daybreak Coronet is a good Aura that gets better with totem armor. Spellwild Ouphe is a great deck-building tool that is perfect here: load it up with Auras for a resounding two mana less (quite significant) and it'll naturally be protected. Kitsune Mystic is the gem, though. Cast useless Guard Duty and Pacifism on it, and it'll be protected while flipping into Autumn-Tail, Kitsune Sage. You thought Nomad Mythmaker was good. A mere one mana to basically regenerate any creature you control. Wow.

We're doing some cool things, but what's the pay off? Evershrike is the win condition, and what a scary thought that is. Imagine facing down a Fists of Ironwooded Evershrike with Umbra Mystic on the battlefield. Not only does your opponent have to kill the totem armor Aura first, Evershrike can always just come back to life! Devastating. Kor Spiritdancer keeps things moving and is a threat herself.

Now I want to turn the spotlight on probably the weirdest thing possible, which itself is a riff on one of the weirder game states in Magic: The Fetterball. Kelly Digges' article from last year explains the concept, but basically through a Simic Guildmage (which can shift Auras to and fro), two Faith's Fetters can be enchanting each other. Freaky.

Now substitute the Faith's Fetters with Quiet Disrepairs. Okay, an actually viable use of this anomaly (gaining 4 life an upkeep.) Since they're both enchantments, this works. Now, this doesn't actually do much with Umbra Mystic. Destroying the first Quiet Disrepair will be replaced by destroying the second one will be replaced by destroying the first one again—and then you'll stop, because each replacement effect has been "used up." But it's a neat trick! In this deck, your plan is to enchant your own Auras with Quiet Disrepair, gain life for as long as it sticks around, then destroy Quiet Disrepair instead of the Aura it's enchanting (which might, thanks to totem armor, be destroyed instead of the creature that Aura is enchanting).

2 Shape of the Wiitigo
38 Cards